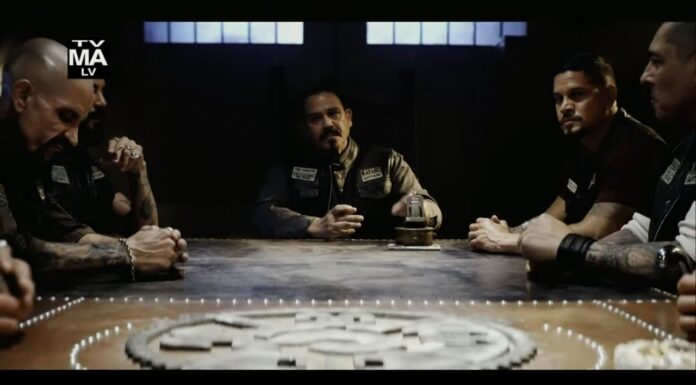 In episode 5, Sons of Anarchy killed Coco, a key member of the Santo Padre charter. In the latest episode of Mayans M.C., the club decides how to treat Sons of Anarchy in the future. Read Mayans M.C. Season 4, Episode 6, recap titled “When I Die, I Want Your Hands on My Eyes.”

The episode begins with Marcus Alvarez, the current president of the Santo Padre charter, receiving a phone call while in bed about the attack. He dashes over to the Santo Padre clubhouse. EZ informs Angel that Oakland has been assaulted. Canche, the Yuma Mayan chief, also shows up at the Santo Padre clubhouse. They try to figure out what happened, and Hank said that five individuals, including Coco, were killed in the attack. The bulk of Mayans are taken aback by the news and remain mute. Gilly, on the other hand, responds aggressively and breaks a table. Despite their friendship, Gilly and Coco’s last discussion was tense.

Canche speculates that El Banquero is connected because Angel killed the gangster’s accountant. Marcus Alvarez is skeptical that the Sons of Anarchy would carry out such an attack. EZ claims that the Sons of Anarchy, as well as some of his fellow Mayans charters, are not trustworthy. After Canche has left, Alvarez confronts EZ about his actions, emphasizing his desire to prevent a war. However, EZ recognizes that conflict has already begun. Angel gets extremely drunk at the Santo Padre pub after learning of Coco’s death. Angel enters to speak with Gilly, and they discuss how difficult it is to lose someone. Angel advises they check on Coco’s daughter Letty and Hope.

Angel goes alone because Gilly is too intoxicated to stand. Angel discovers Coco’s home in shambles, likely by Letty in her grief. Angel and Letty realize Coco wouldn’t want the house in such a state and start fixing it up. They kiss and appear to have sex. After Angel leaves, Letty enters Hope’s room and finds her crying. Letty asks Hope not to depart the next day.

What happened to Nails? Did she lose her baby?

Pregnant Nails wakes up without Angel. She begins painting the baby’s room, but soon discovers she is dripping blood after moving a ladder. She enters the shower and immediately begins bleeding profusely. Nails gets dressed and attempts to leave the house, but she is rapidly losing blood and is unable to function. Felipe Reyes drives her to the hospital from her home. Nails finds she has lost her baby during a medical test. The deceased baby is brought out by the nurses, and Nails hugs him. She blames moving the ladder on the way home.

@JustinaAdorno and @edwardjolmos just had one of the most devastatingly beautiful moments on tv. Felipe giving Nails her moment alone with Christopher. #MayansMC pic.twitter.com/YaDwKIqu90

Alvarez is apprehensive about going to war with the Sons of Anarchy. Hank to keep the knowledge a secret so he can figure out what’s going on. but he is eager to strike back Who tells their attacks as Sons of Anarchy. EZ and Alvarez have a tense relationship.  Jess, who delivered the Sons of Anarchy Allesandro Montez’s kutte, and sparked the battle with the Mayans MC, has qualms about spying on the latter gang as a bartender. Her sister says she has no option. Miguel Galindo leaves the convent, believing Martin, who the LGN has seized and is torturing, will finally give him up. He wears Martin’s clothes and has a subordinate pick him up after Tomas’ funeral.

EZ finds Alvarez conducting maintenance on his bike after saying goodbye to Sofia, who spent the night in his trailer. Alvarez avoids answering the topic of who attacked the Mayans by emphasizing the significance of peace and how dreadful and worthless war is. Alvarez even accepts blame for Coco’s death because he was the one who sent him to Oakland. Coco will be avenged, he promises. EZ is also eager to exact vengeance on those who murdered Coco as soon as possible.

Emily Galindo calls EZ on the payphone later in the day. she warns him of the inquiry into Marlon Buksar’s death. Despite EZ’s request, she hangs up the phone without telling him where she’s hiding. Manny arrives on his motorcycle after their call finishes, claiming to be there to assist in the struggle against the Sons of Anarchy. The Santo Padre group realizes that Marcus Alvarez has kept the facts about Coco’s killer hidden from them.

The Mayans of Santo Padre enter the temple, where Marcus Alvarez claims the Sons of Anarchy will be held responsible for Coco’s death. Alvarez, on the other hand, refuses to go to war, claiming that the Mayans are incapable of fighting. Before exacting revenge, Alvarez wants to talk to the Sons of Anarchy’s chief charter. EZ says that they have devised a strategy to strike the Sons of Anarchy at UC Davis, where they will be able to eliminate a significant portion of their leadership in one fell swoop. EZ offers to go and intends to take Angel and Gilly with him at first, but Hank refuses to let Gilly go. Manny then takes Gilly’s spot on the team. Alvarez warns them that if the mission fails, it will be detrimental to the club. EZ, on the other hand, assures him that if all goes well, no one will ever assault them again. “And it will imply we’ve done the right thing by Coco,” For a few moments, no one at the table says anything until EZ says, “Let’s go to war.”