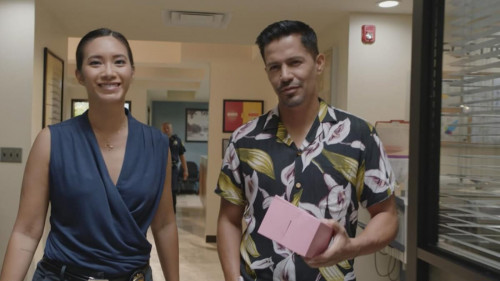 Magnum P.I. is a series reboot of Donald P. Bellisario and Glen A. Larson’s original show of the same name. Peter M.Lenkov and Eric Guggenheim are the creators of the newest series. The Series has found a loyal following despite varied reviews and similarities to the original series. Thousands of people across the world tune in to watch the show every week, so its devoted audience must be anticipating the next new Season 4 with bated. Season 4 of Magnum PI will premiere in October. so now is the perfect opportunity to gain some inside information! you can take a glimpse of the New Magnum PI Season 4 Episode 1  synopsis, and promo with www.tvacute.com below, which will enable you to understand the episode better.

Martin Martinez joins Magnum P.I. for season 4 on CBS, he will play Cade Jensen, a driven but troubled teen who tries to charm his way into a position at La Mariana and eventually finds a surrogate mom in TC (Stephen Hill).

Magnum and Higgins aid a grad student whose life is in danger in the season finale of ‘Magnum P.I. Season 3‘ After solving the case, Ethan forgives Higgins for keeping her background hidden and invites her to Kenya. Meanwhile, Magnum opens up to Uncle Bernardo about his relationship with Higgins. Higgins leaves Hawaii with Ethan to spend the next six months in Kenya.  Magnum will face new and exciting cases in the fourth season. When Higgins returns from her trip, things may not be as they were. Magnum, meanwhile, is expected to move on from Higgins. He’ll be seeing Gordon’s partner, Lia Kaleo. We’ll gradually learn why they’re hiding their relationship. The writers have hinted that we may learn more about Robin’s true identity by learning the meaning of his yacht’s name.

CBS has released the Magnum PI Season 4 Episode 1 Synopsis. let’s see what have store writer is for us?  The first episode back, titled “Island Vibes,” has a lot to look forward to. The return of our favorite program is exciting enough, but we’ll also get a glimpse of Higgins’ life before he returns to Hawaii. Thomas Magnum (Jay Hernandez) is juggling a new relationship with his work as a private investigator, and we have a feeling that things are going to become complicated! Despite the fact that Higgins isn’t around Magnum and the rest of the crew straight away, you will see her in this episode. It’s unclear when the reunion will take place, but when it does, it’ll be a cause for joy.  Who knew Magnum’s new love interest would also be Detective Katsumoto’s (Tim Kang) partner? The fact that there are suddenly so many dynamics that need to be balanced will be a significant part of what makes this storyline interesting to watch throughout the season. read the synopsis of Magnum PI Season 4 Episode 1 below.

“Island Vibes” – As Magnum tries to keep his new relationship a secret and handles cases solo while Higgins is away, he is tasked with finding a single mom being hunted by two very dangerous gangs. Also, while Higgins is abroad with Ethan, a misstep forces her to assist an old employer, and Rick gets some bad, but also very, very good news.

Magnum P.I. Season 3 Episode 16 release date is on Friday, Oct. 1, 9:00-10:00 PM, ET/PT on the CBS Television Network. It is also available to stream life and on-demand on Paramount+. the season Premiere episode was written by Eric Guggenheim & Gene Hong and directed by Bryan Spicer.