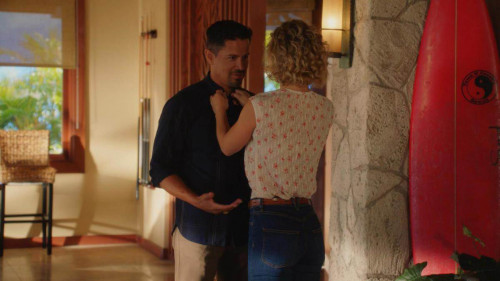 Are you ready to learn more about Magnum PI season 4 episode 2? This is a major episode! For starters, Magnum and Higgins will be reunited, and they’ll be tackling a difficult case but be prepared for some major surprises! If you’re looking forward to the next part in the story,www.tvacute.com provided everything you need to know before watching episode 2 titled “The Harder They Fall” of ‘New Magnum PI ’!

New Magnum PI Episode 402 Synopsis:  While Magnum and Higgins reunite and work the case of a construction worker’s tragic death, TC and Shammy get skyjacked by a pair of drug runners posing as tourists.

Magnum P.I. Season 4 Episode 2 release date is on Friday, Oct. 8, 9:00-10:00 PM, ET/PT on the CBS Television Network. It is also available to stream life and on-demand on Paramount+. the season Premiere episode was written by Eric Guggenheim & Gene Hong and directed by Bryan Spicer.

In Kenya, Robin’s latest White Knight novel is read to Ethan through video chat while Higgins is in Kenya. But Ethan has patients to see. Kumu is administering the estate in Higgins’ absence. Like Juliet, Magnum is critically critiquing the same book. Jenny Lu, Thomas’s latest customer, vanishes. Katsumoto’s colleague Lia Kaleo is secretly dating Magnum. Thomas discovers Jenny has a new job that pays handsomely and her automobile is found by T.C. She had witnessed a murder, prompting the assassination attempt on her life.

Higgins asks Thomas for help. She needs to find the vaccine thieves for the village that is destitute. Juliet kills three robbers and steals the vaccinations. Eve instructs her to leave Kenya immediately if she wants Mi-6 to defend her medical community Two out-of-town hitmen are after Jenny. Jenny was looking for Barry Costigan. . The hitmen kill Costigan. Lia follows Jenny’s phone. Jenny is a target. Thomas knocks off two hitmen. Juliet leaves Ethan. Higgins contacts Magnum to say she’s back in Hawaii.