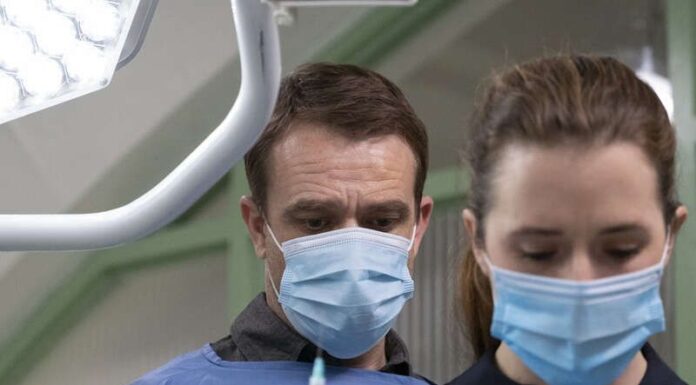 In a crucial episode of the vampire drama “Let The Right One In”, the storylines start to converge when detective Naomi (Anika Noni Rose) follows the drug trail to Claire Logan (Grace Gummer) at her family’s mansion on Long Island. There, Claire’s experiments in vampiric virus research have taken a grisly new turn, and Naomi discovers that Claire is the source of the trail. Back in Brooklyn, Mark (Demián Bichir) asks Naomi out on a date in the hopes of gaining information that may bring him closer to Claire. And how will Mark react when he learns that Eleanor, his vampire daughter (played by Madison Taylor Baez), has confided in Isaiah, her best friend and neighbor next door (Ian Foreman)?    For a detailed explanation of everything that happened in Let the Right One In Episode 8 continues reading at tvacute.com.

The eighth episode of “Let the Right One In” opens with Mark confessing his sins to the priest of the church while seated inside a confessional. Father Sean, who is sitting across the box and has listened to countless confessions, is having trouble processing Mark’s story and invites him to join him in his office for a drink. After a few beers, Sean tells him that he can’t receive God’s grace and that His forgiveness is not available to him as long as he continues to kill in the office. Sean is told by Mark that he is powerless to stop the crime wave unless his daughter is healed of her illness. Mark attributes Eleanor’s sickness and Elizabeth’s passing to God in one way or another. Elizabeth was a noblewoman who adored caring for the sick and never stopped praising God’s name, but she perished and Eleanor was orphaned when she was young. After eight episodes, it is abundantly evident that Mark is hell-bent on keeping his vow to Elizabeth, who made him swear to turn the world upside down to discover a treatment for Eleanor’s disease before she took her own life to feed Eleanor. Father Sean, however, claims that Mark’s anger is directed on his wife rather than God since she used a promise to trap him. Since that promise has only brought Mark, Eleanor, and everyone else who has come into contact with him grief and suffering, it is now time to let go, Father Sean says.

When the action shifts to the lab, we find Peter, Matthew, and Claire huddled together to protect Claire’s latest test victim. In the previous episode, after being able to identify the genes preventing Daisy’s growth, Claire asked her brother for a live specimen so that they could go on to a human experiment. Claire wants to discover the exact location of the virus’s start in the brain and how it spreads throughout the human body because it moves through it so quickly. Peter refuses to leave as Claire uses a scalpel to cut into the man’s head and asks him to leave because the operation will be “intense.”

As the action shifts to Isaiah’s apartment, Naomi is seen holding Eleanor as she sobs and thinks back fondly on her mother. It’s our first glimpse of the developing friendship between Eleanor and Naomi. There are even suggestions that Naomi could be ready to adopt Eleanor; she even extends an invitation to Eleanor to attend her self-defense class at her gym. The elevator ding announces Mark’s arrival, and the pair enter the corridor. Naomi accepts Mark’s invitation to a cosy supper and promises not to be late for her self-defense lesson as atonement for last night. While this is going on, Claire tells Peter to stay away from Chris since he is growing too close and attached. Since his initial bite ten years ago, Peter has always been confined to a room. Peter’s life has been entirely turned upside down by the virus; he isn’t permitted to attend school, hang out with his pals, or take leisurely walks on the beach, and unlike Eleanor, he has no one with whom to identify. Chris is even kept informed of the changes Peter is going through because Peter is sympathetic to him. Even his sister is pleaded with to heal him. Chris and Peter’s sequencing is essentially identical, indicating that the strain has been around for a very long time and whatever part Peter was hundreds of years old. Claire was looking for signs of polymorphism, minor random faults in the sequence of a genome.

After tracing the Mitigan to Arthur and his business AKL, Naomi and Ben knock on Claire’s door. In order to raise money to save his son’s life, Claire’s father, Arthur, has been manufacturing and peddling Mitigan covertly. But following Arthur’s passing, AKL declared bankruptcy, and all the assets were sold off. Naomi also asks about Matthew, who had ties to one of the drug dealers who was responsible for its distribution. In fact, the man in question was Mathew Dean’s subordinate and stationed in Afghanistan. In addition to managing AKL’s security detail and serving as Arthur’s personal bodyguard for years, Matthew was a former soldier. Naomi and Ben also ask for access to former job documents, but Claire denies knowing anything about the killings or Mitigan’s participation and refuses them access. However, Naomi’s lingering glance hints that they will soon come into contact.

After work, Naomi joins Mark for fries and burgers at his favourite restaurant, but this time, it’s clear that she’s afraid to discuss her case with him. She tells Mark that if she shows up at Claire’s estate without a warrant, she risked being fired. Mark does some additional research and discovers that the medication Claire discovered in the murder victim’s system was being produced by her father. While this is going on, Isaiah spots Matthew leaving Mark’s apartment, pretending to be a building employee who is investigating a gas leak but fleeing before Mark can get there. In the evening, Mark discovers that Claire is the same person he had

been questioning while looking for “whatever bit Eleanor” and that treating her is his only option. After Eleanor confesses that Isaiah is aware of and sympathetic to Eleanor’s predicament, Mark and Eleanor argue. Eleanor wants Isaiah and Naomi to be a member of her family because she loves them both. She believes that Naomi will support and assist her even after learning about her condition and the numerous victims her father has killed in order to bring her meals.

“Let The Right One In Ending Explained:

Peter tries to smuggle Chris out during the night, telling him to run as far as possible before the sun rises to avoid being burned to death, but he is caught by his sister, who asks him to bring Chris back into the lab for his own safety because he will be a threat to them if he escapes. Peter refuses Claire’s wishes and leads Chris to the entrance, but as they get close, Chris entirely changes into a vampire, knocking Peter to the ground. Chris catches Claire as she screams loudly and rushes inside to try to save herself before choking her to death by grabbing her by the neck. Peter, who had previously been unaware of Claire’s motivations for strapping Chris to a testbed, intervenes to save Claire and dragged Chris’s lifeless body back to the lab.