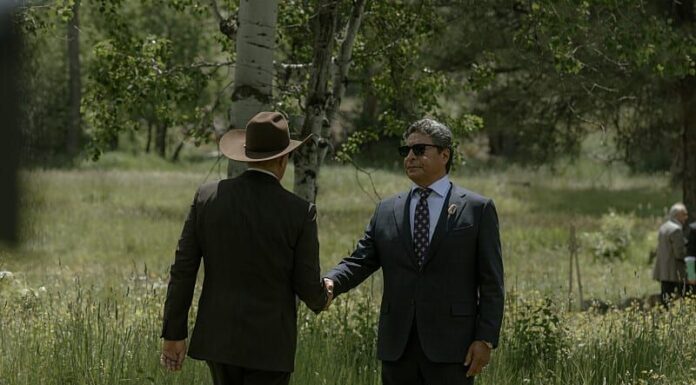 Buckle up, everyone! Yellowstone season 5 has begun. Fans watched the first two episodes of the new season last week with a record-breaking launch of the Paramount Network drama, which had over 15 million viewers for the Season 4 finale in January. The Duttons, a family of landowners in charge of the biggest continuous cattle ranch in the US, are the focus of Yellowstone. John Dutton is sworn in as the next governor of Montana in the Season 5 teaser, but the plot twists don’t stop there. Kevin Costner, Kelly Reilly, Cole Hauser, and more actors may be seen in the drama-filled show. Additionally, 1883, the predecessor to Yellowstone, was a success, so more spin-offs are coming for enthusiasts.

In “Horses in Heaven,” the fourth episode of Yellowstone season 5, Governor John Dutton (Kevin Costner) deals with the attempts of Market Equities CEO Sarah Atwood (Dawn Olivieri) to undermine him while making reforms at the capital. Wendy Moniz’s Senator Perry offers him some political counsel. While everything is going on, Beth (Kelly Reilly) is in legal problems for assaulting Hailey (Ashley Platz) for touching Rip (Cole Hauser). The information you require to watch Yellowstone season 5 episode 4 is provided below.

Keeping up with Yellowstone has always been a challenge since, unlike 1883, the Paramount Network series is not available on Paramount+. However, (tvacute.com) we have all the tactics and tools you need to view new episodes of Yellowstone as soon as they are released. How to watch Yellowstone Season 5 Episode 4 and catch up on previous seasons, if necessary:

On Sunday, November 27, at 8 p.m. ET, the third episode of the fifth season, which has been enlarged to a staggering 14 episodes broadcast in two parts, will premiere.

Yellowstone Episode 504 Synopsis: Beth heads to Salt Lake City to take care of unfinished business; a trap is set for Jamie; Kayce makes an important decision for his family.

How to stream Yellowstone Season 5 Episode 4 without cable

The most popular series on cable is, you guessed it, on cable. Yellowstone is shown on Paramount (the network, not the streaming service), and will ultimately be streamable on Peacock. Don’t worry if you cut the cable but still want to watch your favorite western show. Through live TV streaming services like DirecTV Stream, FuboTV,   Philo, and Sling TV—all of which offer free trials—you may watch the Paramount channel. Through Amazon Prime Video, you can also buy the most recent and previous seasons of Yellowstone.