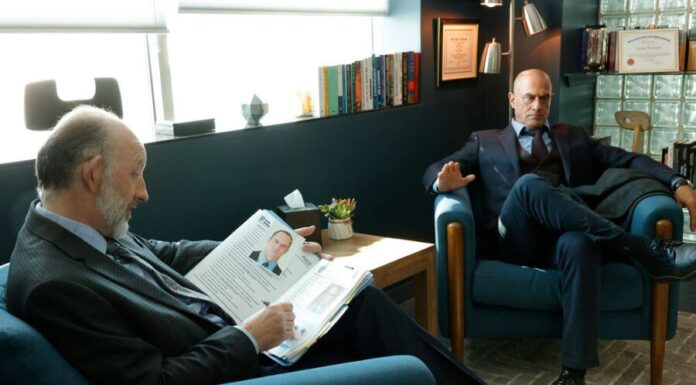 The newest Law & Order spinoff is back with brand new episodes for its third season. Law & Order: Organized Crime Season 3 Episode 10 titled “Trap,” When a confidential source comes to Stabler (Christopher Meloni) pleading for assistance, the task force directs its attention to a dangerous gang that is developing a name for itself in New York. In the meantime, Jamie (Brent Antonello) goes undercover but quickly learns that he may be in over his head, and Bell (Danielle Moné Truitt) meets her new superior. Both of these events take place simultaneously.  If you’re interested in learning more, we’ve included the complete plot summary and promo for Law & Order: Organized Crime Season 3 Episode 10 below.

Synopsis: When an informant comes to Stabler desperate for help, the task force sets their sights on a dangerous gang making their mark on New York; Jamie goes undercover, but soon realises he may be in over his head; Bell meets her new boss.

Law and Order: Organized Crime Season 3 Episode 10 will release on Jan 5. 2023 at 10:00 PM – 11:00 PM on NBC. This season will be divided into three arcs, each lasting roughly eight episodes, allowing the writers to delve into some intriguing subject. (HULU) Subscribers to services like Fubo, Sling, or YouTube TV. Fans who have access to Amazon Prime, Apple TV, or Google Play will be charged for each episode they view.

GPS leads them to an industrial parking lot. No cell signal. Bell goes through and is directed to the third level through a crimson door. Silas says to follow the music. They locate him. No DA. When they know what to communicate, Bell will call the DA. Silas has notes on NYC corruption. Teddy must go. For the right money, he can arrange anything. Bell claims Pearl provided much information. Silas says he’s offering more. MRIs show a brain tumour. Though Bell distrusts Silas, they call the DA. She summons Jet and the DA. Signal drops. Stabler notices surveillance cameras. Silas says this is business. He claims all men choose between being good fathers/husbands or good workers. Stabler says Pearl is pregnant. An ADA arrives shortly and is relieved to find only two males upstairs. Another DA claims to be in a taxi. Bell advises calling 911. Bell quickly stops the fake DA. He fools Stabler too. Bell chases them but trips on a rotten board and harms herself. No 911 signal for the real DA. Bell hobbles up. Stabler tells Silas to hide.

The fake DA is armed. Jet arrives. Reyes chases and catches the real DA. He says he can’t call 911 as rounds are fired. Stabler fights the fake DA. As Bell and Stabler leave, Jet and Reyes enter with firearms. Gunfire continues. After running out of shots, the fake DA sprays Stabler with a fire extinguisher and flees. Shoots Jet. Reyes pursues the fake DA. The crew reunites to find him. Reyes survives a shelf fall. Stabler shoots the fake DA, who falls out the window! Bell’s leg worries Jet. Reyes inspects the guy’s automobile while Stabler tries to acquire a signal to free Silas. Another car speeds in and fires. Hits Whalen. Silas doesn’t know if Whalen leads the stairs. Stabler said they can’t pass these folks. They barricade the door and check the cameras for Jamie. Bell says they can’t fight on the stairway when outgunned. Jet suggests finding heating ducts. Silas has paper mapa. Pump room. Bell says she’s alright despite her leg. Stabler creeps to Whalen. Jet watches them leave. Bad men are after them. On the monitor, a mobster speaks. He’s after Silas. They kidnapped the DA. Reyes meets Stabler on the roof. Signalless. Stabler discards the phone. Jet wants Stabler checked. Bell rejects. She informs Jet she will work with Tia in Italy.