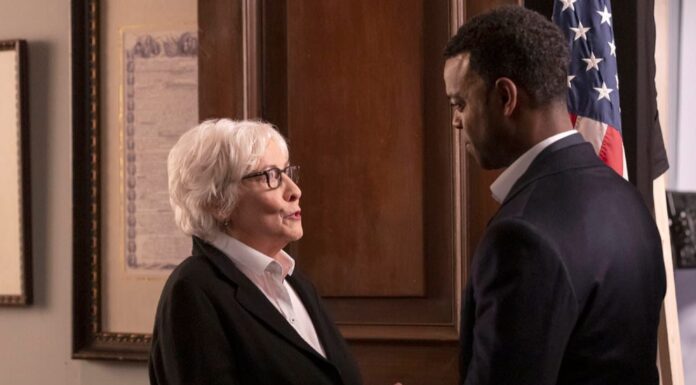 After a two-week hiatus, NBC crime-drama television Series SVU returns with a new episode. Law and Order: SVU Season 23 Episode 19 will air 0n April 28 on NBC. Demore Barnes, welcome back to Law & Order: SVU! In tonight’s episode, he will reprise his role as Christian Garland.

In the last week’s episode of Law & Order: SVU, a Central Park assault resembles a decades-long series of rapes. McGrath wanted to concentrate on apprehending a serial rapist who had gotten away with his crimes for far too long, but he kept interrupting with drivel about newspaper headlines. Benson didn’t choose this job because of the politics.  (To know more episode last episode 18 read the recap below) Law and Order: SVU has already piqued the interest of viewers, who can’t wait to see what the series has in store for them next.   You’ll discover everything you need to know right here. From www.tvacute.com, a summary and promo for Law and Order SVU Season 23 Episode 19 can help you better understand the episode.

There’s a lot more exciting and dramatic stuff to come in ‘Law and Order: SUV season 23 episode 19 the title will be “Tangled Strands of Justice.” After human bones are discovered in Central Park that tie to a missing-persons case from his days as a street cop, former deputy police chief Christian Garland (Demore Barnes) reaches out to Benson (Mariska Hargitay). In other news, a victim from one of Carisi’s recent cases (Peter Scanavino) has been apprehended.

Synopsis: Garland asks Benson to reopen a missing person case he worked as a rookie officer; a victim in one of Carisi’s recent cases is arrested.

Demore Barnes was last seen as Garland in the Season 23 opener, which was split into two parts. He left the job of his own accord, but only after Chief McGrath (Terry Serpico), who had been acting as his replacement, had hung him out to dry. Because he disagreed with how police wrongdoing was handled, the higher-ups didn’t regard him as a team player, and while they didn’t dismiss him, Garland accepted his father’s advice: “Move on.” Outside the department, you’ll be more hazardous to them than inside.”

Law and Order SVU Season 23 Episode 19 will release on Thursday, April 28 at 9 p.m. on NBC. Subscribers to services like Peacock, Fubo, Sling, or YouTube TV will be able to watch the new episode on Thursday night as well. fans with a Hulu account will be able to watch the season 23 debut for free the next day. Fans who have access to Amazon Prime, Apple TV, or Google Play will be charged for each episode they view.

Kayla, a recently single woman, walks into a bar and is instantly picked on by Dustin, the bartender. Meanwhile, another customer makes a pass at Dustin’s sister, prompting Dustin to issue a caution to the stranger. All except one of Kayla’s shots are paid for by Dustin, who is clearly smitten with her. Captain Olivia Benson and Detectives Fin Tutuola and Amanda Rollins investigate the attack the next morning while Kayla slowly recovers. Rollins has returned to work after taking care of her mother. Chief McGrath arrives, unhappy that there was yet another attack in the park — after all, New York has gone through a lot. Rollins travels to the hospital to speak with Kayla, who is having trouble remembering what happened the night before. They claim to have discovered her phone but not her wallet. Kayla claims she never saw her assailant’s face, but she can recall her night at the pub. Rollins and Fin proceed to question Dustin, but he refuses to cooperate. They check Dustin’s flat and discover a gun, cash, and Kayla’s pink pocketbook, which has gone stolen. Then they get a call from an unknown individual telling them they’ve arrested the incorrect person. This John Doe is the genuine rapist, and Dustin is completely innocent. It’s better than being raped, but Benson isn’t certain that one of the drug dealers was engaged in the rape. They speak with Demmy once again and inquire if she brought anyone home with her that night. Shay, the latest victim in Kentucky, is concussed but recovering. Her military boyfriend has an alibi, and the sheriff has requested that the rape kit findings be expedited.

Shay, Fin, and Rollins return to the crime scene. Since 2001, when Dustin would have been a youngster, the DNA from Shay’s rape kit has matched twenty samples of an unknown serial rapist in the system. It isn’t him, and it is something considerably more nefarious. In the Manhattan squad room, SVU teams and troopers from all across New York and multiple states gather to jump on the case. McGrath is ecstatic that all of this is leading to a positive headline and more financing. The rapes occur across states and along interstates, but all of the reports are consistent. Rollins and Fin watch the bar’s security footage and notice a suspect wearing a Walker Trucking cap near the jukebox. Although the video shows him departing before Kayla, exterior cameras reveal that he had been waiting outside the entire time. The squad then shifts gears and begins investigating attempted rapes around interstate truck stops in the hopes of gaining more information from the victims. Raelynn Cole, who was almost raped six years ago, is one of the women Benson and Fin speak with. She recognizes him immediately away after looking at the photos Benson provides: Mr. Walker Trucking Hat Guy. Wes was his name, she recalls, and it was his wife who had called him that night, shouting at him over the phone over missing his birthday with his girls. Rollins narrows down the drivers to only one: Wesley Parker, whose travels coincide with the rapes’ locations throughout time. Benson and Fin rush off to Redding, Pennsylvania, to see him.

Liv approaches him at the casino machines and flirts with him, getting him to confirm his time in Kentucky and his recent visit to New York. Later, McGrath is pleased that a good NYPD headline has finally arrived. Carisi, on the other hand, is concerned about presenting the case, given that Dustin has already been jailed and has Kayla’s wallet in his room. Benson and Rollins arrive to the hospital, where it is discovered that Demmy has been raped as well as beaten. Dustin, her evil brother, was the one who attacked her. Demmy had framed Dustin for Kayla’s rape, and when he discovered it, he attacked her. Of course, she framed him since Dustin had been sexually assaulting her for years. Demmy claims she followed Kayla into the park because she had a horrible feeling about her and Dustin. Dustin had killed her, she thought when she saw her laying there. She was afraid to call the cops, but she wanted to make sure she left a trail of evidence for them to follow in order to get him. Carisi, of course, does the right thing and declines to charge Demmy with planting evidence because she is a rape victim herself. Dustin is brought back into the room in front of a furious Liv and Carisi. He instantly confesses, claiming that his sister had “wanted it” for years. Parker, on the other hand, will be the one counting down the days until he is released. Finally, McGrath gets his press conference, and Benson gets to report the serial rapist’s arrest. On video, Liv expresses her gratitude to Fin and Rollins, giving the committed duo their due.