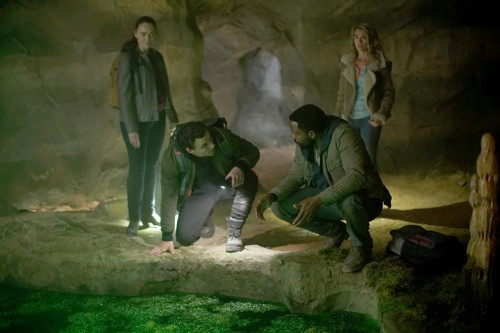 Eve traveled the perilous jungle to rescue his life in La Brea Season 1 Episode 2. She put herself in danger by doing so. While government operatives watched Gavin and Izzy’s every move, they attempted to show survivors were still alive. Now fans are curious to know what will happen next? You may see www.tvacute.com’s synopsis, photos, and promo for La Brea episode 3 named “Day Two” below, which will help you better understand the episode. In addition, check out the episode 2 recap below.

As they prepare to perform a controlled fall into the sinkhole in the third episode of La Brea, the city arc accelerates. The religious sisters are nowhere to be seen. However, we are introduced to a new character – – who has some very deep ties to the Harris family, and who will undoubtedly give plenty of juicy emotional moments in the season’s later episodes. Meanwhile, Eve and Ty go on a hunting trip when they run out of food. The turmoil in Marybeth and Lucas’ relationship gets some fantastic growth as well.

La Brea Episode 3 Synopsis: With the survivors’ food supply dwindling, Eve and Ty venture into the forest on a risky hunting expedition only to face unexpected dangers that threaten their survival. As an unlikely rescue mission comes to fruition, Gavin must put his faith – and the fate of his family – in the hands of an old friend with whom he shares a complicated past.

The episode begins where ew left episode 2, Tigresses lunge at Ty. He fires. The trio flees again. Ty believed they were extinct. Eve wants to go back to Josh but does not want to bother the others. They follow her but encounter tigers and traps. Riley worries for Josh as the virus spreads. Gavin is shown in the hospital shortly after his accident. He informs Eve about them. She assures them they’ll overcome it. He looks at her ring and tells Izzy he has a plan to show their family is still alive. Dr. Nathan is also investigating Gavin’s case. Gavin asks Dr. Shen to carbonate Eve’s ring to see if they can date its discovery. Sam jumped from a cliff and split. Ty and Eve searched for hours. Ty is fain. They discover Sam, but he’s broken. Eve can’t leave him, but she can’t move him. Meet the Castillo girls. Veronica needs help burying their father. Veronica asks Scott for help finding wolf tracks and blood. Sam is troubling the foursome. Sam and Ty order Eve to get stitches and medicines. Eve makes it just as Josh deteriorates. Unexpected support from a stranger finds Ty and Sam. The state sends Gavin to Dr. Nathan. He explains them. She believes they began due of a nearby sinkhole on his accident day. They need his aid heading a rescue crew.