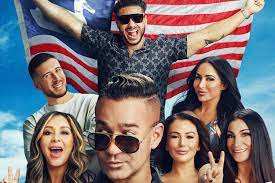 Jersey Shore, a reality television program that aired from 2009 to 2012, was revived into a series that had its international premiere on April 5, 2018, on MTV. Trips to El Paso, Texas, and San Diego discover marriage problems and reopen old scars that threaten to expand the roommates’ deepest rifts, so the group embarks on new adventures. At www.tvacute.com, you’ve come to the perfect place to get the Jersey Shore: Family Vacation Season 6 Episode 1 release Date and promo.

The group keeps upping the ante on each vacation. The “Shore” family fist pumps its way across the nation for the first time ever in “Jerzdays,” which is back after an explosive season five that put friendships to the ultimate test.

As they travel to New Orleans, North Carolina, Wine Country, and even behind the scenes of Dancing with the Stars to support Vinny Guadagnino, Nicole “Snooki” Polizzi, Deena Cortese, Mike “The Situation,” Pauly “DJ Pauly D,” DelVecchio, Angelina Pivarnick, and Jenni “J Woww” Farley will continue to bond, quarrel, and drink it up.

Mike and Lauren prepare for the birth of their second child, change is in the air; Vinny makes his dance debut on ABC’s Dancing with the Stars; and recently divorced Angelina is looking for love. Everywhere this trio travels, turmoil constantly follows, building to an unexpected bombshell. Angelina might drop the bombshell by admitting her affection for Vinny.

After Angelina kisses him on the cheek in the new clip, Snooki notices it. They appear to enjoy making one another’s lives miserable, so it’s hard to imagine them ever being happy together. The fact that Vinny and Gabby Windey became close during the filming of Dancing With the Stars further complicates matters. Although they haven’t publicly admitted their relationship, if their social media interactions are to be believed, the two are definitely becoming closer. View the official trailer below,