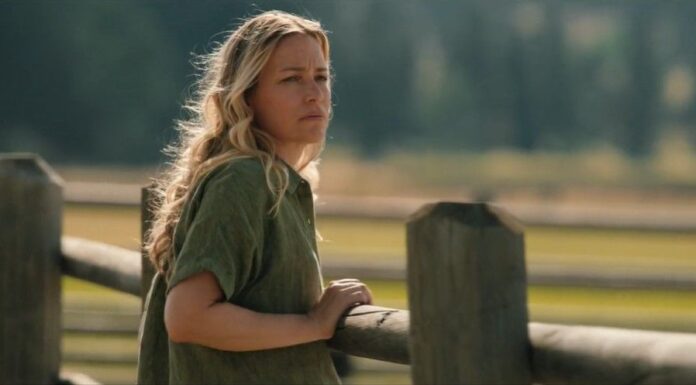 The Duttons are followed in the fifth season of Paramount Network’s “Yellowstone” as they struggle to preserve their inherited Yellowstone Dutton Ranch. In this season, An environmental activist Summer Higgins (Piper Perabo) the unkempt blonde with the black eye got into a brawl with the irascible Beth Dutton (Kelly Reilly). As the story goes on, John and Summer, who are starting to accept the Dutton way of life, get closer. The two enjoy a public kiss. After Yellowstone’s midseason finale ends on a cliffhanger. Fans are buzzing with rumors in anticipation of Yellowstone’s upcoming midseason cliffhanger, and a cast member is feeding the flames. However, viewers must be wondering if Piper Perabo, who plays Summer Higgins is leaving Yellowstone. (tvacute.com) Here is all the information you require regarding Perabo’s upcoming role in “Yellowstone.”

Summer hails from another country. Her parents reared her as a vegan and taught her that eating meat and other goods derived from animals is a sin. She explains why she and her coworkers are protesting the butchering of animals in Montana and why they are stripping off in front of the Livingston offices of the Montana Livestock Association and dousing themselves in red paint. Later, she and her coworkers were detained, but thanks to John, she was able to post bail. Her main diet preference is gluten-free. Later, when she and her coworkers protested outside the planned airport site, she was detained. Summer was sentenced to serve the remainder of her term in Yellowstone Dutton Ranch after serving some time in prison but was later granted clemency by the newly elected Governor Dutton.

In episode 507, Summer tells John she has a better understanding of why he does what he does and even thanks him for “kidnapping” her after getting firsthand experience immunizing the calves. He kisses her at the conclusion of that chat while concealing himself with his cowboy hat. That oddly provocative relationship between Summer (Piper Perabo) and John appears to be flourishing. Seeing Summer vaccinate calves and make genuine attempts to integrate into the lifestyle of the ‘other half’ was a heartening experience. To be absolutely honest, the romance feels a little contrived, but the dynamic of the characters’ underlying contrasts does make their scenes together enjoyable. Summer’s (Piper Perabo) perspective on marriage is, of course, extremely irritating. Is there going to be another fight between Summer and Beth, and will it lead to something…more?

Piper Perabo opened up in a candid chat with TV Insider about her thoughts on the approaching midseason finale. Perabo gave the impression that we might not see much of her character Summer Higgins when Season 5 picks back up later. Naturally, Perabo’s choice of ambiguous language above raised some questions. Even Cinemablend made the assumption that her character would be leaving the show after the midseason break. It appears that some fireworks are necessary to keep people interested in this extended season. In Yellowstone’s midseason finale Summer also changes her outlook on life. Another significant event involves her relationship with John Dutton (Kevin Costner). Is Piper Perabo Leaving Yellowstone? Despite the fact that there is not yet any official confirmation regarding the same.