Is Kaleidoscope on Netflix based on a true story? 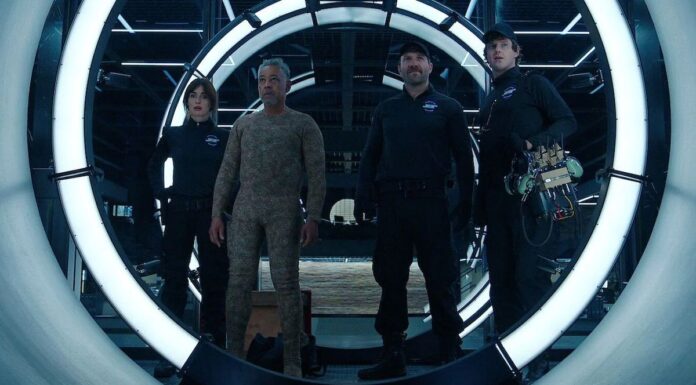 Kaleidoscope, which premieres on Netflix on New Year’s Day, first offers your usual heist thriller. Giancarlo Esposito‘s Leo Pap leads a team of safe crackers as they attempt to steal $7 billion in bearer bonds from the reputedly most invincible safe in the world. However, Kaleidoscope is much more than a typical robbery tale. Tati Gabrielle, Rufus Sewell, and Jai Courtney, an Australian action star, are among the excellent actors in the series.

The eight episodes that make up the criminal thriller can be viewed in any sequence, allowing viewers to jump in on the action as it’s happening on screen at various points in time. But after watching, there is only one question running through people’s minds, is this a true story, and whether the events of Kaleidoscope are based on real events? You have come to the right place at tvacute.com to get answers to all these.

Is Kaleidoscope on Netflix based on a true story?

Kaleidoscope, a new Netflix miniseries, is based on the true account of a firm that almost lost billions of dollars worth of bonds due to flooding in its underground vault. The reality, however, differs greatly from what is depicted in the new TV series in that an estimated $70 billion in bonds disappeared after Hurricane Sandy due to the storm’s devastating power alone. The series, which has its premiere on Sunday, centres on a crew of thieves who try to commit a heist while a storm is raging. The idea of a heist in the middle of a storm was inspired by a real-life incident in 2012 when “$70 billion worth of bonds got soaked,” according to the show’s creator Eric Garcia in an interview with the Netflix website Tudum. Here is all the information you require regarding the upcoming series and the tale it is based on.

The plot centers around an underground vault becoming flooded following Hurricane Sandy Kaleidoscope. In 2012, Hurricane Sandy struck the Caribbean, the East Coast of the United States, and Canada. According to CNN, the storm directly caused at least 147 fatalities in the three regions and caused billion-dollar in damages. The storm also resulted in flooding in New York, including the Depository Trust & Clearing Corp.’s underground vault, which was owned by Wall Street and contained more than 1.7 million paper certificates for shares, bonds, and other financial instruments for crucial components of the US trading infrastructure.

After being able to enter the vault at 55 Water Street, the business discovered substantial flooding and water damage, according to Reuters reporting two weeks after the storm. When asked at the time how many bond certificates were flooded, the business declined to say, but spokeswoman Judy Inosanto said it was a “very small percentage” of the $39.5 trillion in stocks and bonds that the corporation keeps on hand. She claimed that the majority of bonds and stocks were dealt with electronically. The DTCC claimed that 99% of the certificates from the flooded vault had been found and restored in their annual report from that year. But in “Kaleidoscope,” the crew uses the storm as a pretext to pull off a theft. In the program, Giancarlo Esposito guides a group of underdogs in robbing the criminal organization Kaleidoscope.