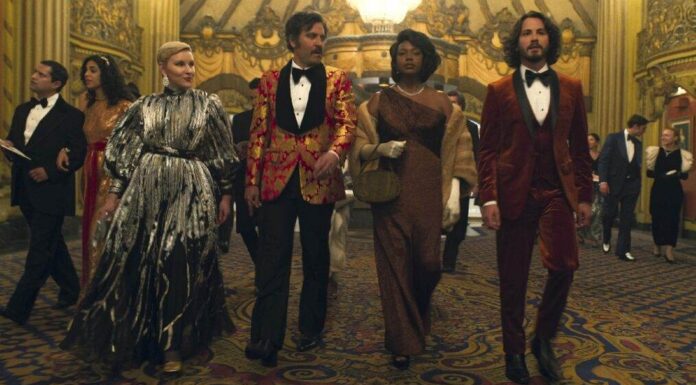 After the shocking reveal at the end of Hunters Season 1 that Adolf Hitler and his wife Eva Braun (Lena Olin) are still alive and hiding in Argentina, the shocking thriller about Nazi hunters who want revenge moves ahead two years. Since each season is two years apart, the jump in time makes sense. In the last eight episodes, which you can watch all at once, Jonah (Logan Lerman) and Detective Millie Morris (Jerrika Hinton) work together to get the rest of the team back together to find this true evil and brought the villain of all time to justice. Jennifer Jason Leigh joins the colorful group of action-hero archetypes, and Al Pacino shows up in flashbacks as a fake Meyer Offerman.

In 1972, on a day known as Van Glooten’s Day, in Austria. Chava Apfelbaum (Jennifer Jason Leigh) a woman who walks into a confectionery shop and starts questioning the man working there as a butter sculptor works in the town square. They start off gently talking, but before long she’s asking about every Jew who lived in the town in the early 1940s and subsequently vanished. He acknowledges that the town’s Jewish residents were picked up and transported to concentration camps via railcars, and that the shop he now owns originally belonged to a Jewish family when she brandishes a knife and threatens him.

The shopkeeper shakes the woman’s hand and observes a tattoo of a number on her forearm just as he starts to feel safe. “I arrived here thanks to a ghost that visited this village at the conclusion of the war… She closes the door as the man’s fear grows and says, “Friend, the path of Hitler leads here. She asks where the despot was going, and the shopkeeper responds by providing some details. As she strolls through the town, a German cover of Kelis’ “Milkshake” banging on the background, she chops out his eyeballs and stuffs them into one of the prize-winning butter sculptures after getting what she came for.

Let’s take care of Meyer now. He holds court in a restaurant in 1975, talking with about six other men, then glances up when another man walks in. Meyer is confused by the arrival of the new man. Meyer consults his rabbi for spiritual guidance after running into the stranger once more. The holy man advises Meyer that he is only experiencing survivor’s guilt and that he should consider his survival to be a blessing. However, someone slips an envelope marked “Hello Wilhelm” and addressed to Meyer on his secretary’s desk while they are there. The Wolf, sometimes known as Meyer, is obviously terrified. His real name is Wilhelm Zuchs. He makes his way home while going over a list of everyone who knows or might know his secret. Ruth, Jonah’s grandmother, and Gertrude, Wilhelm’s sister, are listed. When he gets home, he contacts the latter while posing as a representative of the government census board. But she claims that Wilhelm’s passing 35 years ago is final.

Meyer becomes aware that the restaurant employee is following him the following evening. But he’s doing it carelessly, and soon Meyer turns around and affably offers the startled stalker to go out for a drink with him. It turns out that the mysterious follower is a poor fellow ex-SS officer who is complicit in a scheme to blackmail someone else. Meyer claims to comprehend and offers to assist him in getting back on his feet. then kills him by stabbing him in the neck in an alley, leaving his body there. Also in 1975, FBI agent Millie confesses to a priest that her two years of searching for Nazis “has eaten me.” The priest begins to focus on her homosexuality when she adds that her concern with her job caused them to break up. She dissuades him, claiming that she is there to atone for his faults, not her own: She is there to arrest him because he worked with Nazis in Lithuania during World War II.

Up until the priest’s pre-trial hearing, it appears to be a victory. The court rules that Millie cannot establish that the priest, who has now changed his identity, is the person charged with the decades-old crimes, despite the testimony of witnesses who claim he killed a baby and assisted Nazis in rounding up Jews. He is released. Millie feels the injustice very deeply. Asking Jonah if he’s still doing what he does, she rambles into the answering machine when she rings Jonah’s grandmother’s house. Later, after breaking into the rectory, she attempts to coax him into confessing while she tapes the exchange. But when he doesn’t comply, she grabs a revolver and accidentally shoots him in the chest. She immediately begins to scream, dashes home, and is in the middle of erasing evidence when Jonah knocks on her door. You called, he inquires.

But first, we learn more about Ruth’s grandson and his activities since we last saw him. Long-haired Jonah is a graduate student in Paris in 1979. He is engaged to a British student, and it seems that they are really falling for each other. She is not aware that he is still actively searching for Third Reich refugees. In order to accomplish this, he waits for someone for many nights at a brothel in Paris. Finally, that person appears, and it’s Biff Simpson. Jonah infiltrates the space while Biff engages in raucous, enraged sex with a staff member of the brothel. Jonah makes Biff lock himself with zip ties as the terrified woman flees the room. Jonah is made fun of by Biff since the hunters are no longer cooperating. Was it as a result of what occurred in Spain? He prods, “I heard about what you did. Jonah dismisses him, claiming that he has been waiting for Biff for a year and that after he has finished with him, he will permanently stop looking for Nazis. The alternative, according to Biff, is that if Jonah permits him to survive, he will take him to “the greatest prize you could imagine: Adolf Hitler.”

Jonah laughs, pointing to Hitler’s widely reported demise near the conclusion of World War II. For trusting all he hears, Biff makes fun of him. Then he notes that Jonah saw The Colonel, a.k.a. Eva Braun, but was unaware that she was also thought to be a dead wife. Hitler’s What, you didn’t believe they’d have a strategy for getting out? Says Biff. He says he’ll take him to a location named Valle de los Sueos. However, a woman soon enters the room, and Biff takes advantage of the confusion to try to sneak up on Jonah. Jonah then shoots Biff, killing him.

Jonah had a nightmare at home, but he keeps it a secret from his fiancée. To complete his thesis, he claims to be taking a short research trip to Israel. He claims he doesn’t know what a Meyer is when she asks him why he cried “Meyer!” in his dream. And that’s not exactly a lie either… Hitler is the man being watched shaving in the background. Eva is awaiting him at the supper table later. Joe enters the space with a knife. but then makes use of it to cut Adolf’s meat. He addresses Hitler as “my Fuhrer” and accepts his invitation to join them for dinner.