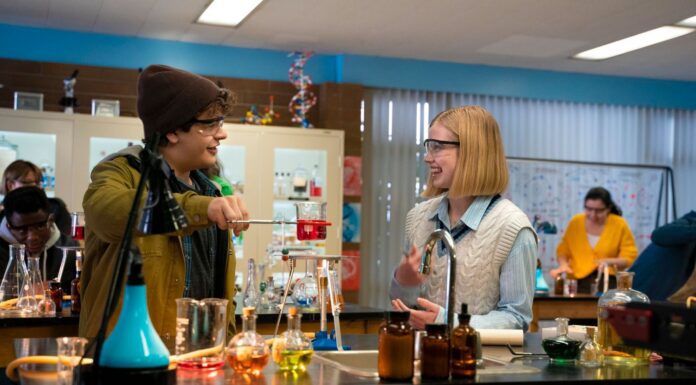 Honor Society is a film directed by Awesomeness Films about Honor (Angourie Rice), a bright high school senior whose primary goal is to get into Harvard.  Fans of Stranger Things will be surprised to see how old Matarazzo has gotten, as well as to see him dressed in something other than the dorky 80s garb his character wears in the show.

Honor devises a Machiavellian strategy to eliminate her top three student opponents, but things take an unexpected turn when she unexpectedly falls for her fiercest rival, Michael (Gaten Matarazzo).

Paramount+ has revealed that its next provocative YA comedy Honor Society Movie will premiere exclusively on the service on Friday, July 29 in the United States, Canada, Australia, and the United Kingdom. Later this year, the film will be released in Latin America, Italy, Germany, Switzerland, Austria, and France.

Michael Dipnicky will be played by Gaten Matarazzo, and Honor will be played by Angourie Rice, who is most known for her performance in the Marvel Spider-Man films. Christopher Mintz-Plasse, Armani Jackson, Amy Keum, and Ben Jackson Walker all appear in the film.

Honor Society follows Honor (Rice), a high school senior with Harvard as her ultimate goal. Three kids, however, stand in her way of obtaining a highly wanted recommendation letter from the school’s guidance counsellor (Christopher Mintz-Plasse), which would guarantee her entrance. Honor devises a strategy to eliminate her competitors in order to secure her success until she falls for one of them.

Oran Zegman directs the “Honor Society”, which is based on a script by David A. Goodman. Michael Lewen is the film’s producer, with Syrinthia Studer, Ron French, and Don Dunn serving as executive producers. Fred D. Lee is in charge of the film’s development at Awesomeness.

Share
Facebook
Twitter
Pinterest
WhatsApp
ReddIt
Previous article
Now and Then Episode 8 Recap [Finale]: Who Is Responsible For the Murders in the Now and Then Finale Ending?
Next article
In The Old Man Series, Who Is the Wife of Faraz Hamzad? Why Did His Wife Leave Him?