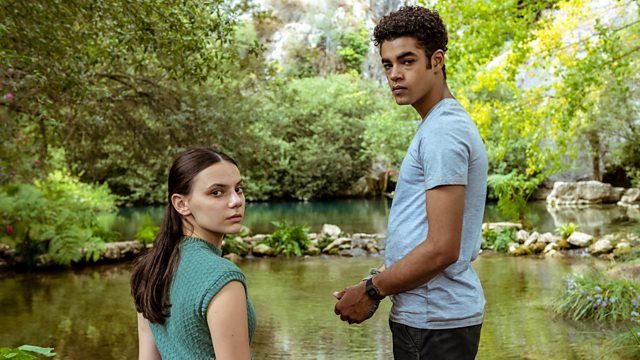 Young protagonists Lyra (Dafne Keen) and Will (Amir Wilson) survive immense difficulties and losses in their mission to advance good throughout the cosmos in the opulent adaptation’s concluding two episodes of His Dark Materials Season 3, which air back-to-back. The despotic heavenly agent Metatron (Alex Hassell) and the army of the freedom-loving people are still at war in the penultimate chapter. In the conclusion, Will and Lyra make one more sacrifice while learning more about the life-giving dark matter known as Dust. (tvacute.com) Here is all you need to know about the conclusion of the His Dark Materials Season 3 Episodes 7 and 8 Recap, in case you missed any of the exciting moments.

The sole remaining hope comes from Lyra and Will as the Clouded Mountain creeps closer. It might be the end if Metatron is able to subdue the Daemons. Asriel understands that they must fend off Metatron and his men for as long as they can in order to try and buy Lyra and Will some time. Lyra is their sole hope for success in their revolt. Asriel has protected the base against Angelic attacks in preparation for Metatron’s arrival. He has installed capacitors in the abyss to capture the flow of Dust. It might have sufficient strength to shake up Clouded Mountain. Despite Mrs. Coulter’s skepticism, Asriel is adamant that the Angels are jealous of their brief existences and plans to transport Metatron to the Abyss. They face eternal forgetfulness, which is a destiny far worse than death and would result in the loss of Asriel.

In return for the little that he has done for Lyra over the years, he wants to do something for her. Xaphania forewarns Coulter that her love for Lyra will be both her greatest strength and her greatest weakness. She must be prepared for this because when the Authority show there and they start fighting, it very well may determine the course of her life. Asriel addresses all races during her reflection period to explain that life does not terminate at death but rather begins again. They will face death and allow their lights to break through the night. “We are liberated today!” The cheers gradually become muffled by the approaching darkness as he beckons. Asriel soars into the night in his Intention Craft as various lights start to come on. They are Angels, followers of Metatron. They number thousands. Will and Lyra are standing in the Land of the Dead as they observe all the spirits go through the gate to the other side. Will finally breaks through to Lyra’s reality because they are both in this together, which ignites the major conflict between the two sides. Mrs. Coulter is dispatched to try and assist Lyra and Will because they are in danger. Daemon-Eaters have been released by Metatron, and with all creatures revolting against them, they don’t appear to have a chance of victory. The Spectres are all brought into Mrs. Coulter, who then uses amazing power to blow them back into obscurity. Serafina remains by Asriel’s Intention Craft for those in the air up until Kaisa tells her that Pan has been located. When Serafina flies down, she sees Kirjava, Will’s daemon, and Pan together. She exhorts them to take to the air and fly with them as they return to camp.

Lyra and Will are followed to Asriel’s camp by Ogunwe, who arrives before them. He warns them not to use the Knife because the Angels will detect it right away if they do. Ogunwe also brings up Asriel’s well-known speech, going on to say how he supported her cause, much to Lyra’s amazement. Unfortunately, while traveling, they come under attack from animals. Through the use of manipulation, Metatron infiltrates Asriel’s camp in an effort to turn the soldiers against Asriel and his rebels. Mrs. Coulter requests that Metatron appear by listening to the nagging voice in her ear. He most definitely does that, urging Coulter to bow down before him. Coulter turns to her Golden Monkey while she does this and says that he knows what to do. Mrs. Coulter advances alone into the blazing light down an odd, ethereal route. Asriel pilots his craft inside at the same time as she does. Mrs. Coulter is confronted by Metatron, who appears as Enoch, a human being. Coulter acknowledges wanting to speak with him. For Marisa, Metatron provides both temptation and salvation. He offers to let the woman transcend her human body in particular. She would have access to the entire multiverse and would formally join the Angelic Order.

As for Asriel, Metatron plays with him and makes him look in the mirror. He engages in combat with a copy of himself who taunts him and declares that no one will ever remember Asriel. Asriel hears Mrs. Coulter there as well and starts yelling for her. She’s too preoccupied, though, with being controlled by Metatron. Asriel, who is bleeding from the nose and lying on his back, is displayed by Coulter, who appears to have switched sides. As she approaches, Mrs. Coulter turns to face him. When the troops return to Camp, they start turning and pleading with the Authority for forgiveness. Before Serafina shows them where their daemons are, Lyra and Will witness this for themselves. As Will makes a hole in the universe and quickly diverts Metatron, Lyra believes they should be together once more. They have everything they require to alter the course of history. When the Golden Monkey steps in to turn on the capacitors, Asriel, Metatron, and Mrs. Coulter are sent plummeting into the depths, saving the planet. In a really poignant sequence, the Golden Monkey reaches out to touch Lyra before dissipating and fading away. There is no longer a Clouded Mountain. The war has been won, and everything has been preserved. Naturally, a lot of compromises have been made to make this possible. Will and Lyra depart the camp as they get ready to meet up with their Daemons.

His Dark Materials, season 8, episode The final chapter in the paradisiacal universe Lyra and Will have relocated to begins with Season 3. After everything, Lyra decides to cool off and unwind in the water, but the two daemons are nowhere to be seen. She is still plagued by the memories of the Golden Monkey going missing. Lyra has an odd impression that Asriel has also passed away and thinks Mrs. Coulter is dead. In the realm of the Mulefa, Father Gomez chases Lyra mercilessly, but Balthamos stops him before he can kill her; both of them perish in the ensuing combat. Following their recovery, Lyra and Will come upon a herd of Mulefa, who direct them to Mary. Mary shows the group Dust via her amber lens while sharing her knowledge. She reveals that after discovering a woman who made her more alive than her faith did, she decided to leave her life as a nun. The next day, Will and Lyra share a kiss after being moved by Mary’s story. They are covered in dust, which starts to repair all the planets.

While Xaphania assures Mary that her job as the Serpent is complete, Queen Serafina Pekkala, who has been watching this from Asriel’s camp, comes to encourage Pantalaimon and Will’s devil (whom she names Kirjava) to return to their humans. In order to stop Dust from fleeing and Spectres from forming, Xaphania instructs Will and Lyra’s respective daemons to lock all windows between worlds (apart from those allowing entry from the Land of the Dead). Lyra and Will agree to part ways since they both realize they couldn’t survive in a strange land for very long. Will transports the trio back to Lyra’s Oxford using the Subtle Knife, where the pair exchanges sincere farewells. Before Mary and Will go back to their planet, Queen Serafina enables Mary to view her own daemon. Through the last window, Will bids Lyra farewell before shattering the knife. The last gaps between the planets are sealed by angels. Will meets up with his mom Elaine while Lyra goes back to Jordan College. Lyra and Will come to a bench in the botanical gardens on the midsummer’s day of their own planets to reflect on their time spent together.