Get Ready for The Milestone 400th Episode: Grey’s Anatomy Season 18 Episodes 19 and 20 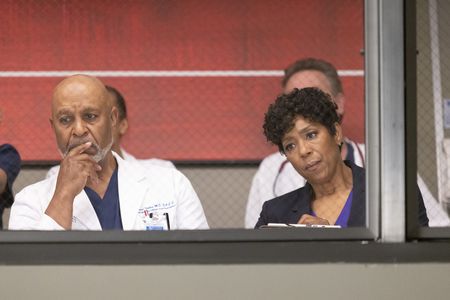 In Grey’s Anatomy season 18 episode 18,  Grey’s Anatomy Season 18 Episode 18, covered a terrible, racist attack against a patient during the Month. while Maggie’s traditional dinner party at Mer’s house did not go as planned. in addition, Maggie has reservations about Nick. Amelia approaches Nick and expresses her desire for Mer to be happy. In bed, Amelia is having sexytimes with Kai. (Read the recap below). After the major episode, Grey’s fans are looking forward to a new episode of Season 18. Allow www.tvacute.com to offer you all of the necessary information to watch Grey’s Anatomy Season 18 Episode 19.

Japril fans, this one is for you! Jackson and April are back in Grey’s Anatomy Season 18 Finale

😌 #JaprilAnatomy coming to save the day. Look at them #GreysAnatomy pic.twitter.com/12jZYJvOK6

Japril couldn’t keep his distance for long. Dr. Jackson Avery (Jesse Williams) and Dr. April Kepner. (Sarah Drew), also, pay a visit in the Season 18 finale. They moved to Boston with their kid the last time we saw them. In season 17 they weren’t romantically linked at the time. But, since they were both single, who knows what has happened in the last year? What brings them back to Grey’s Anatomy We have to wait to see.

In the Grey’s Anatomy Season 18 finale, Will Mer leave Seattle?

The Season 18 conclusion titled  “Out for Blood” – is fittingly focused on a dangerous blood shortage at Grey Sloan Memorial. Meredith and Bailey and Richard and Owen are veteran surgeons who all will confront career-shifting decisions. Mer (Ellen Pompeo) wants to make sure the residency program is on stable ground before relocating to Minnesota to join boyfriend Nick (Scott Speedman) and take that coveted Parkinson’s research position in the second part of the finale titled “You Are the Blood. But initially, she has a case that is made more dangerous by the blood scarcity. All of this culminates in a cliffhanger about her future. Bailey (Chandra Wilson) and Webber (James Pickens Jr.), whose failing teaching style started the program’s collapse, are both stressed by the program’s uncertain fate. Meanwhile, Owen (Kevin McKidd) stands to lose the most: his role in a dying veteran’s suicide could land him in prison. Watch Grey’s Anatomy Season 18 Episode 19 Promo below

Titled “Out for Blood” – Due to a blood shortage, Grey Sloan Memorial is setting up a voluntary donation center. Meanwhile, Nick asks Meredith for help with his patient and Winston is hung up on his relationship with his brother, in the first hour of the season finale. Guest-starring is Kate Burton as Ellis Grey, Cedric Sanders as Simon Clark, Bianca A. Santos as Kristen Clark, Kristen Lehman as Cora and Sandy Martin as Sally.

Titled “You Are the Blood” – The blood shortage at Grey Sloan Memorial continues. Meanwhile, Meredith makes a risky decision regarding a patient and Owen’s actions to help his fellow veterans come to light in the second hour of the season finale. Guest-starring are Jason George as Ben Warren, Jay Hayden as Travis Montgomery, Cedric Sanders as Simon Clark and Bianca A. Santos as Kristen Clark.

Grey’s Anatomy Season 18 back-to-back episodes 19 and will air on  May 26, 2022, at 8:00-10:01 p.m. EDT on ABC. Subscribers to Hulu can watch the show the next day on-demand online or live to stream it on Hulu+Live TV. the show is available on Fubo TV, DirecTV, YouTube TV, and Xfinity, among other platforms. You can also buy or rent episodes on Vudu, iTunes, Amazon Prime Video, Google Play, and Microsoft Store.

Maggie and Winston were hard at work getting Mer’s home ready for the dinner party. Amelia was also assisting. I’m having a good time with Kai. Nick expressed his delight at being in the same city with Mer as they left Grey Sloan. Nearby, Richard informed Catherine that he would not be accompanying her to the hospital for chemo. Amelia and Kai had hardly arrived at Mer’s when Nick arrived, carrying much too much wine. Owen and Teddy were the next to arrive, unfashionably early. A woman called Alice was carried into the ER as Mer was leaving after being assaulted by a man who hurled racial comments. Nick appeared to be on his own for the time being. Mer’s boyfriend, as expected, had a thorough grilling. And, to his credit, he was completely transparent. When Link came, he congratulated Kai on his accomplishments. Teddy begged Bailey to play Boggle when she arrived. Guests continued to arrive.

Wendell arrived next, unannounced, with flowers. Winston wanted to ask Wendell to accompany him, but Maggie advised against it. Winston asked Wendell how awful his condition was in the kitchen. Nick interrupted the schemer before he could respond. Wendell quickly admitted that the people to whom he owed money were not good people, which was why he had to go missing for a bit. Winston told his brother to leave Seattle right away. Winston then walked out of the house, leaving Wendell behind?!Kai confided in Owen that they didn’t want children. Kai reminded him of Amelia before Scout was born. Outside, Link was taken aback to find that Jo had admitted to sleeping with Teddy. When Amelia finally rejoined Kai, they reiterated their opposition to children. They had no intention of abandoning their personal and professional goals in order to start a family, and they had no intention of changing their minds. Owen and Teddy slipped into their SUV for a quickie as they left the party, but were interrupted by Bailey. Maggie disclosed to Winston that she had given Wendell the money to pay off his creditors when Winston returned.

Catherine presented Simon and Kristen to her oncologist Richard when she was undergoing chemotherapy. When Kristen doubled over in pain, Catherine got more of a distraction than she’d anticipated. So, if it wasn’t contractions, what was it? Jo immediately discovered Braxton Hicks. Kristen confided in Richard that she was confident Simon would conquer cancer. He had to survive if she got pregnant, she’d reasoned. She hadn’t realized she’d left him alone with the potential that he wouldn’t live by not allowing him to cope with it. Lin, Nico, and Bokhee all discuss their discriminatory experiences. Nico was called in for an ortho consult as Mer and Levi were treating Alice, and he quickly recognized that the incident was a hate crime. The case, understandably, upset Grey Sloan’s Asian doctors, as well as BokHee. Mer fought hard to keep Alice alive as the story neared its conclusion, and she was finally able to inform her family that she had survived. Richard assured Catherine that she didn’t have to go through chemo only for him, based on his talk with Kristen. “But I still want to live,” she replied. “I’m still itching to laugh.” He offered, sweetly, to make a clever joke. Finally, in a private time with Nick, Amelia revealed what he already knew: that everyone was scrutinizing him. “I believe you make her happy, and she deserves it,” she explained. Nick had prepared a candlelight meal for Mer when she finally arrived. She said, “I love you.” He said, “I love you, too.”