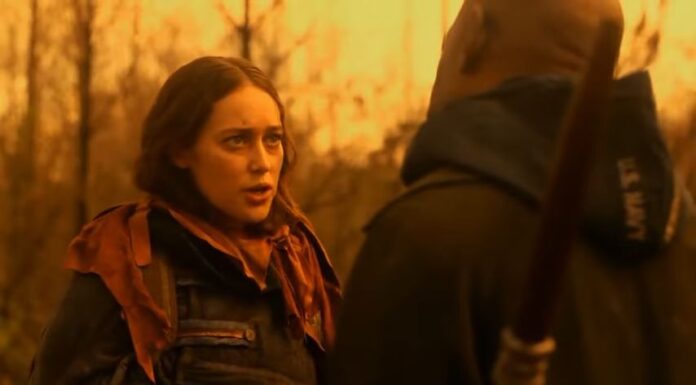 Alicia is alive and well, and she is the leader of the new group, the Stalkers, as stated in the last episode of Fear the Walking Dead Season 7. Sherry and Dwight brought Morgan to Alicia since she requires his assistance. The episode closes with walkers loaded with nuclear bomb pieces exploding, spewing a deadly vapor into the air. read the recap below section. What will take place next? To discover out, we’ll have to dig a little deeper. www.tvacute.com has everything you need to know about Fear the Walking Dead Season 7 Episode 8 titled “Padre” from the release date to the summary.

“Padre” is the title of the SHOW, and viewers will finally learn more about this phrase. We’ve heard the term several times this season, and it’ll be interesting to learn more about it. Alicia Clark is back in the spotlight as the narrative progresses! Let’s start with where Alicia has been for the majority of the season: She’s cut off from the rest of the gang and is forging her own path. What went down in the bunker? That’s one of the big questions right now, along with where her tale will go next and how many challenges she’ll face. We anticipate that this episode will be crucial in understanding where she has been. we’ll just have to wait and see what it is and how it affects the tale moving forward. As the midseason finale, it’s safe to presume that huge events will occur and that whatever happens will perfectly set the tone for the second half of the plot. No official release date has been set, but we expect to Fear the Walking Dead to return in the first half of the year.

Fear the Walking Dead Episode 708 Synopsis: Alicia enlists Morgan’s help to search for a new home for her people, but Morgan soon learns the search is more complicated than he imagined.

Fear the Walking Dead season 7 episode 8 is available a week ahead of schedule on AMC Plus in the United States. This episode is currently available on AMC+.  Tonight (December 5) at 9 p.m. ET, the usual AMC premiere will take place. If you don’t have cable, you can watch AMC on Sling TV, Fubo TV, YouTube TV, and DirecTV Stream. Season 7 of Fear the Walking Dead will air on AMC at 2 a.m. on Monday, December 6th, 2021 in the United Kingdom. BST replay. and is available to catch up on Amazon Prime Video.

Juliana creates a portrait of Victor. In 1000 years, he wants people to be able to view this. He receives a lot of calls for intakes. As he sips scotch, he denies them. He sits for his portrait day after day while he refuses to let anyone into his village. Morgan shows up with the baby in tow. He’s eager to meet June. Victor advises him to go for a walk. When he sees his image, he is disturbed and complains to his family that no one sees him for who he is. He urges them to open the door for Morgan. Morgan informs Victor that he didn’t have much of a choice but to come. Morgan is on her way to see June. Morgan inquires as to June’s happiness. He is attempting to improve the situation. She may accompany him. Virginia is the last person she wants to see.

Morgan spends a few days with Victor. He’ll stay so that his infant may get antibiotics. Morgan is well aware that he is attempting to flaunt his success and community in his face. A walker flies past the window at that precise moment. The walker is thrown out by Victor. His people arrive to inform him that the Stalkers have arrived. Victor answers the phone and receives a call from one of the commanders. He makes a threat to Victor. He wants their community, and he’s ready to fight. A contaminated walker can potentially be catapulted at them. Dorie is needed as soon as possible. Morgan is eager to assist. Before falling and choking, Victor informs him. June is the name of the month. Victor is having a hard time. He throws up. He’s been tainted. June informs him that he might or might not die. Outside, the leader sends out a walker to tell them not to do anything amusing. Victor follows Morgan’s instructions and dials the armoury number. A walker collides with the floors below. When they are unable to contact the armoury, Victor informs them that he will accompany them to the armory. He has no faith in any of them. He informs Morgan that he will accompany him, but that he will be holding his baby.

Victor is unable to walk. Morgan offers to help by lowering a rope down the elevator shaft. Morgan demands Victor lower his daughter after he makes it down. After some prodding from Morgan, Victor accepts. He tells Morgan how he can’t trust anyone as he lowers the infant. Morgan encourages him to give it his all. Victor informs Morgan that he knows he won’t come back after he has the baby. Morgan is instructed to look for Alicia. He is well aware that she does not want him to look for her. Morgan assures him that he will return.Victor awakens later. He’s accompanied by Morgan and June. Morgan informs him that Sarah and Grace have defeated the adversary. Victor should be fine, June assures him. She walks away. Morgan and Victor discuss how they plan to discover Alicia and create a community that she would like to live in. Victor notices Morgan’s thumb, which is the same color as the poison. He is well aware that it was he who did it. Morgan confesses it at long last.

Morgan is brought to the roof by Victor and his men. They want to toss him over the walls and into the walkers who surround them. Grace calls from outside at that very moment. If he doesn’t murder Morgan, she’ll come in and help, as well as get rid of the contaminated walkers. Victor concurs. But she won’t be able to exit if she comes in. Morgan later tells his assistant that he now likes his portrait and wants to spend more time with the infant. After all, he is her new father. Morgan runs into Dwight and Sherry in the middle of the night. They introduce him to their new leader. It’s me, Alicia. They exchange hugs. She is in desperate need of his assistance. Her people had had enough. Then a group of walkers appears. People are shooting. Morgan screams “no!” The air is filled with red smog. He orders them to flee.