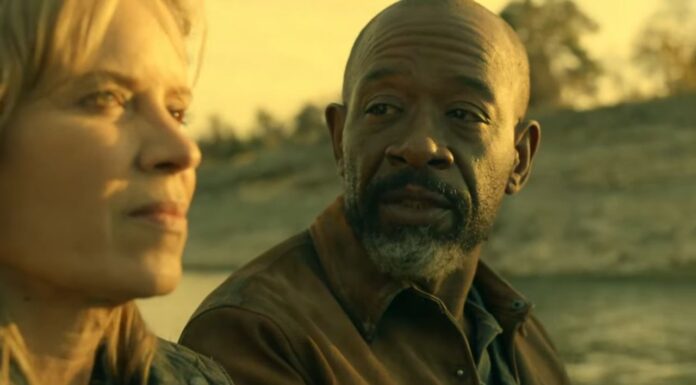 Madison Clark has returned in the finale episode of Fear The Walking Dead Season 7. Madison sacrificed herself by bringing zombies back into the baseball stadium and then locking herself in so the others could escape in season 4, and it appeared that Kim Dickens’ character was murdered off. Madison is alive, as we learned on Sunday’s season 7 finale of Fear the Walking Dead, but she isn’t the same lady we remember. Madison has changed from mother to snatching children and bringing them to P.A.D.R.E. to break the parent-child bond. She started doing it to find out where her own children, Nick and Alicia, were, but she got so far into it that she was afraid to face them again. How its turns; Let’s read the Fear The Walking Dead Season 7 Episode 16 Recap

Morgan and Baby Mo try to reach Grace after arriving in Louisiana in the finale episode. He goes looking for food and other resources due to a lack of them and encounters Ava, who lives alone in a mansion. He is ambushed by a bunch of masked men while sleeping in the raft. They try to kill him the next day, believing he is the one who has been snatching children from the neighborhood. Madison appears in the meantime and saves Morgan, but she takes Mo with her after telling him that she will be safe. Morgan, scared and enraged, demands Madison return her, but she won’t be able to do so without a child to trade. He tries to follow her, but she warns him that if he does, she will murder him. Morgan eventually locates Madison, but by the time he arrives at the dock with her, the latter’s entourage has taken Mo to PADRE.

When Morgan realizes the woman is Alicia and Nick’s mother, she asks for her help in locating Mo in exchange for information on her children. Morgan will only be able to get Mo back if she exchanges the kid with another or a pregnant woman, according to Madison. He recalls Ava’s pregnancy, and the two proceed to her mansion to deceive her. They tell Ava that they can take her to PADRE, which is a safe haven for her and her unborn child. Ava inquires about Madison’s children, but Morgan informs her that they are deceased. He claims Nick was shot and that he assisted in his burial. Alicia contracted an infection and is most likely no longer alive. Madison falls to her knees and screams no, as Morgan apologizes.

Morgan estimates that thirty zombies are attempting to enter the tomb from the outside. Morgan claims they must fight their way through before being discovered. Morgan apologizes to Madison once more, but he didn’t tell her because he thought he had to do what he had to. When he met Nick and Alicia, he claims they were going through a hard time and assumed she was gone. Nick was making every effort to make progress. Alicia was a hero who aided many people before she was bitten. Madison recalls the padre offering to find her children after she had rescued so many, but she declined because she didn’t want her children to know what she was doing. When they hear gunshots outside, Ava wants to give up Madison in order to save herself. Madison tells Morgan not to sacrifice himself for her and to let the bounty hunters in. Morgan yells that they’re about to open the door and take her away. Madison informs him that it’s the only way he’ll be able to live and find his daughter. Once inside, one of the men removes his mask and asks Madison if she remembers him, as she was the one who kidnapped his son.

The bounty hunters urge Ava and Morgan to join them because their children have been kidnapped, but Morgan refuses. Ava is leaving; she claims she must do something to reclaim her child. Madison has been buried in the sand with only her head protruding, so she will die when the tide comes in, but suddenly several walkers from the beach start running towards her, and she may meet another fate.

The bounty hunters and Ava are the walkers. Morgan arrives and takes care of the zombies; he also saves Madison because Alicia saved him, and he tells her that he owes her something. More walkers approach and Morgan becomes distracted when he notices that one of them is Ava; he falls to the ground and drops his weapon, which Madison recovers and saves his life. He claims that Ava died as a result of Padre, not because of him. She promises to assist him in reaching his daughter, but the only way to do so is to deliver him another child; there is no other option. He claims that there must be another option because they cannot fail. Madison sets up a meeting at the boathouse, claiming that he is a collector who is aware of people on rafts who have children and one of whom is pregnant. They board a boat, and Morgan inquires as to where they are headed and where Padre is. Madison replies that she has no idea.