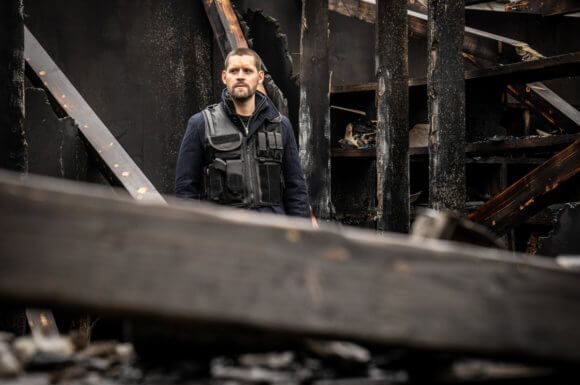 In the last episode 9 of FBI: International, Tank went to the vet. Forrester told Kellet how he joined the Fly Team and got the cadaver dog. Forrester was to leave the dog for further evaluation. A masked gunman took over an orchestra and audience. The Fly Team learned of the kidnapping of almost 200 students and their families at the Balkan Philharmonic Auditorium in Bulgaria.   Read the fall finale recap below.  Tonight, CBS is going to air a new episode of FBI: International. The summary and trailer for FBI International Season 1 Episode 10 called “Close to the Sun” can be found at www.tvacute.com. As a result, you’ll be able to mentally prepare yourself for the new episode.

In the episode’s promo, It simply noted that the crew flies around to different locales to apprehend the bad guys, using scenes from previously aired episodes. According to the synopsis, Jamie is the main character in this episode. The team will travel to Northern Ireland in this episode. In connection with a heist and a murder, one of Jamie’s informants is detained. He asks Jamie to help him clear his identity, claiming that he did not commit the crime. Hopefully, we’ll receive an update on Tank during the episode as well. he’ll be able to spend more time as a pet rather than a working dog. Ryan Watkinson, Simon Delaney, Kevin O’Grady, and Jay Paulson guest star.

FBI: International Episode 10 Synopsis: Kellett and the Fly Team reluctantly join an investigation in Northern Ireland, when one of Kellett’s shifty yet valuable informants who’s arrested for his connection to a robbery and murder calls her to help clear his name.

Tank went to the vet. Forrester told Kellet how he joined the Fly Team and got the cadaver dog. Forrester was to leave the dog for further evaluation. A masked gunman took over an orchestra and audience. The Fly Team learned of the kidnapping of almost 200 students and their families at the Balkan Philharmonic Auditorium in Bulgaria. The International team included 15 American high school students. The performance was intended to be the global cooperation of students. They included affluent ado The highjackers want cryptocurrency. They expressly wanted the FBI.

Ineffective hostage negotiations prompted tactical troops to breach the theatre. Even if the terrorists equipped the building with explosives. The hostage-takers sent a message to the FBI. The boss wanted $10 million in crypto. To prove his seriousness, he executed one man in public. The terrorist agreed to let Forrester take the wounded out securely. Agent Raines suggested he recon the location. One of the hijackers covertly wrote “I want out” on his hand and showed Raines. Raines instructed the man to drop his gun and run with him, telling officials not to shoot him. The thug paused, then dropped his weapon and fled. When one of the other gunmen tried to shoot him, Forrester sniped him. The audience erupted in pandemonium. To buy time, Forrester asked Europol Agent Katrin Jaeger to transfer the man $500K in crypto (for now.)

Commissar Iliev was on vacation but was heading to the standoff to take leadership. Assuming an Albanian gang was behind it, Agent Kellett went to see her known scumbag contact. They bugged the man’s residence and discovered they weren’t involved but knew of the individual who was. They discovered the leader, Ivo Kostov. Petar, the freedman, verified Kostov. A man was kidnapped at the theatre, not for terrorism or murder. But Kostov revised the plan, and the guy executed was the intended kidnapper… but he was killed! They discovered Kostov had terminal cancer and planned to commit suicide to fund his fund whether he lived or died. He demanded money and they stalled with another $500K… but that only added 15 minutes. Since Forrester couldn’t be reached, the vet called Kellett for authorization to conduct emergency surgery on Tank. They freed some prisoners and calmed the gunner, then Bulgarian Commissar Iliev arrived (late) and took leadership, shooing The Fly away.

Since one of the hostages had been slain, Iliev intended to approach the issue with extreme caution. Forrester predicted a severe backlash. Commissar Iliev fired the US federal agents and began using narcotic gas on the criminals. Neither Forrester nor Iliev supported the use of force, citing a previous hostage takeover in Moscow. The Commissar was reminded that 140 hostages died, but Iliev defended the action by claiming all militants killed… Hostiles haven’t acted since. Before Iliev’s soldiers breached the theatre, Forrester and his squad sneaked in. And that the bombs were a bluff, as well as where the gunmen were. The squad prepared for the breach while Iliev forced the poisonous gas into the vents. The Fly Team had to act fast. Agents Raines and Vo surprised two men and made them submit. Raines drew another from the audience and shot him. While Forrester and Kellett killed two others, Kostov kidnapped one teen! While the other agents stepped into position, Forrester dropped his gun. Jaeger begged Iliev to stop and wait for the FBI team. And Kostov was willing to die for it! Raines believes he can hit the shot. Kellet needed assurance. Jaeger radioed Forrester to evacuate his team. Then Forrester bluffed the man, saying the rest was moved. He asked him to confirm on the laptop, allowing Raines to snipe him! Forrester praised his team’s efforts. Raines was shaken but composed. He’s the tech person who’s generally behind a computer, not seeing action. He wished to return to Budapest alone. Vo surprised him and invited him along for the voyage. He needed it. Tank was visited by Forrester, who encouraged him to keep going.