The penultimate episode of Euphoria Season 2, features a fantastic performance by Maude Apatow. The majority of the Howard family’s anguish has been revealed over the course of the two seasons, and the play adds to that. The major plot of the episode revolves around Lexi’s play, which is a thinly veiled version of her and her friends’ high school experience that she’s been talking about for weeks. She introduced the show’s stars after a sexually charged dance routine. However, the personalities in question bore uncanny resemblances to her pals Cassie, Maddy, Rue, Nate, and Jules Vaughn, resulting in disgusting expressions (Hunter Schafer). After Jacob’s representation in the play hit too close to home, Lexi’s conversation implied that he is repressing his sexuality, things rapidly got dark. Cassie and Nate’s love affair was given its own scene in the stage adaption, and it was a game-changer. ‘Wait, is this play about us?‘ screamed an irritated Maddie. Let’s start with Euphoria Season 2 Episode 7 Recap

Lexi began to feel the pressure as the date of her school play approached, and she went to Fez (Angus Cloud) for support. After a heart-to-heart, he promised that he would be cheering her on from the front row, which made her grin. Meanwhile, a surprise visitor arrived at his home and began conversing with Faye (Chloe Cherry), who had been staying with the family.

Lexi Howard’s life is told in this book. Lexi’s performance opens by slamming her sister Cassie, pointing out their differences, and expressing how much she wished she could be just like her as a child. Cassie’s on-stage performer is hysterical and nails her impersonation to a tee. The scene shifts to real-life dialogues between Lexi and her older, “more gorgeous” sister, as Cassie (Sydney Sweeney) watches from the audience, tears in her eyes. Audiences witness how their relationship altered after their father departed and Cassie became acquainted with Maddy through Lexi’s perspective (Alexa Demie). Cassie’s need for affirmation from males, even if they treat her badly, could be explained by their father’s absence. 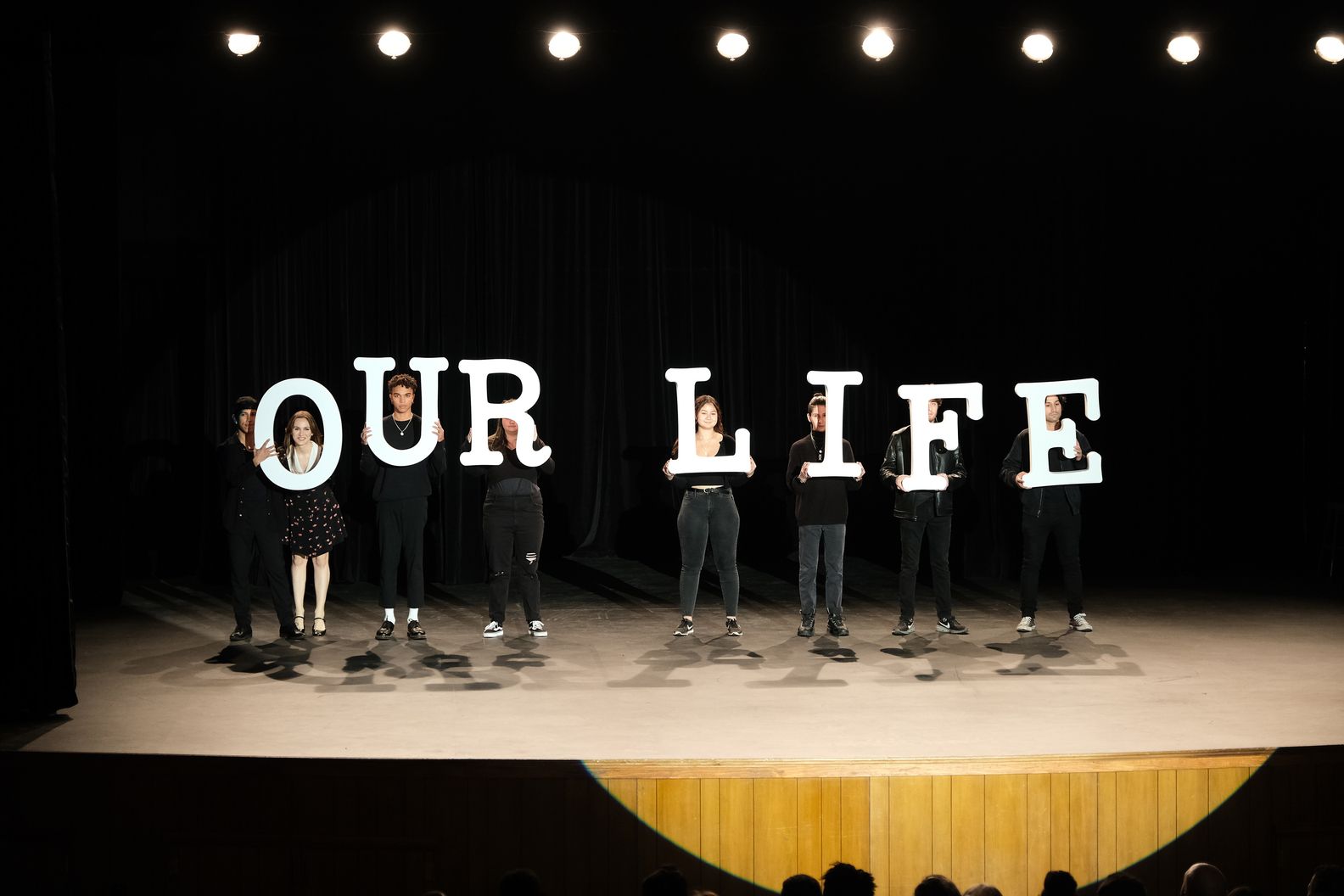 One thing is certain: Lexi has pushed aside as she and her sister approached adolescence, and as a result, she struggled to maintain her connection with Rue (Zendaya), which was deteriorating. Lexi’s performance opens by slamming her sister Cassie, pointing out their differences, and expressing how much she wished she could be just like her as a child. Cassie’s on-stage performer is hysterical and nails her impersonation to a tee.
The camera pulls back as the pills take effect… We understand we’re now watching a dramatization of this moment from Lexi’s play, Our Life, in which Rue plays the role of “Jade.” The real Rue, as well as the rest of their social circle, sits in the audience. Lexi describes the moment she walked in on Rue using drugs following her father’s burial, and how their friendship was shattered as a result. The episode then cuts away from Lexi’s stage to show a real-life scene between the two in Rue’s bedroom that day, with Rue passed out on the bed and Lexi attempting to read a soothing poem Rainier Maria Rilke’s poem “Let This Darkness Be a Bell Tower.”.

Rue is hanging out at home with her mother Leslie (Nika King) in the present day, away from Lexi’s performance. Leslie expresses her fear that Rue will commit suicide. She also makes the devastating admission that if she had to preserve only one of her daughters, she would choose Gia (Storm Reid), a decision that Rue agrees with. Leslie discloses to Gia that she has been suffering at school, skipping courses, and ending in detention, in an emotional encounter. In an enraged response to Rue’s assurance that her sister was “perfectly fine,” Leslie expresses her fears for Gia’s mental and physical wellbeing.

Lexi’s play abruptly shifts to the aftermath of Maddy discovering Cassie and Nate’s secret connection (thanks to Rue). Cassie, clothed in a baby pink sweatshirt, ran up the stairs while Maddy chased her the last time we saw them together. Cassie had locked herself in the bathroom, and Maddy was hammering on the door, screaming for her to come out. You may have noticed that Maddy is pounding on Cassie’s bathroom door after she slept with Nate on New Year’s Eve.

One thing Euphoria makes quite evident is that Nate has no idea who he wants to be with. Cassie is dressed up as Maddy, with Jules-style make-up and a hint of Cassie showing through. Nate’s nightmare includes visions of hugging Jules and his future with Cassie, flashbacks to his love with Maddy, Jules, and his father’s sexual experience, and even having sex with his own father, revealing the steamy mess. Nate’s mind is completely messed up, to say the least.

Nate had escaped with his life so far in the play, but that changes in the last moments of the episode. Lexi has devised a locker-room scene in which a figure clearly inspired by his works out before football practice. The all-male football squad then performs a homoerotic rendition of Bonnie Tyler’s “Holding out for a Hero.” Nate clenches his fist in the audience a hint at his sexual frustration and toxic masculinity issues, and Cassie tries to calm him down. He storms out of the theatre in the end. Cassie chases him down, yelling that she had no idea what Lexi’s play was about. Nate is not convinced for a second.
Unfortunately, the scene ends before Cassie exits the toilet, but Maddy falls down in the arms of Kat (Barbie Ferreira) on the other side of the door, screaming out in horror that her best friend would do such a thing after everything Nate had put her through.

Fez’s watchful and occasionally volatile younger brother kept an eye on the visitors, and while Ashtray sat close next to him, a concerned Fezco kept a safe distance. We don’t know what Ashtray did next, but based on his track record, it probably didn’t include much discussion. Fezco and Lexi may be thrown off by Ashtray’s antics, but we’ll have to wait and see how much damage was done in episode eight. Lexi’s performance is met with mixed reviews. Fez, on the other hand, is completely clueless. So he puts on his pressed shirt and sport coat (oh, my heart! ), picks a bouquet of flowers (oh, my heart! ), and prepares to go to the show. So, what’s the deal? We have no idea. With a furious Cassie peering into the auditorium and her heading along the school corridor with all eyes on her, Episode 7 finishes on a stressful cliffhanger. The words “To be continued” emerge as the screen fades to black. Is Fez all right? What will Cassie’s next move be? What happened to Nate? All will be revealed in the conclusion next week.