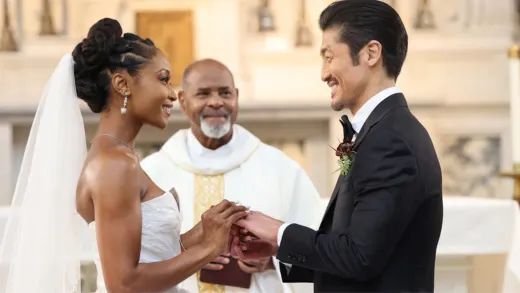 Chicago Med Season 8 Episode 9 will release on December 7, 2022, on NBC. The best news is that a genuine wedding is going to happen! The next chapter of Ethan Choi (Brian Tee) and April Sexton (Yaya DaCosta) begins. After getting married, the joyful couple will leave for an undisclosed location.

In Chicago Med Season 8, Episode 8, characters from Chicago Fire and Chicago P.D. visited Gaffney Medical Center. the episode took viewers on an emotional journey as they finally learned more about Season 8 newbie Nellie Cuevas and got to know Justin Leo, a new face in the ER. Additionally, a homeless guy who was receiving unneeded treatments as his cancer was left unattended to wreak havoc on his body. (Read the Recap ) The most recent promotional materials for Chicago Med season 8 episode 9 including the promo, and synopsis can be found at www.tvacute.com.

Chicago Med’s Season 8 Episode 9 is titled “This Could Be The Start of Something New,”  spoilers indicate that there are a few challenges to overcome before the wedding, so it stands to reason that it will air at the conclusion of the hour. -Anything short than a happily ever after for these two would not be acceptable considering that April is no longer a regular character and  Navy vet Dr. Ethan Choi is departing Chicago Med after this episode. They didn’t make the best of partners when they were both always on TV since they frequently quarrelled. However, Choi has changed since recovering from his shooting, and April is happier at work now that she has obtained her nurse practitioner certification. That ensures that these two will have a wonderful life together.

Additionally, their romance will be off-screen.  The joyful couple is sent farewell by the entire team. Daniel and Sharon might share a heartbreaking moment. Despite being happy for the pair, Sharon might also be sorry to lose Choi as a coworker. Daniel will probably support Sharon in this. Many fans are interested in seeing what will happen to Ethan and April when the wedding bells stop ringing because this episode will also mark Tee’s farewell appearance as the beloved ER doctor. Go ahead and read out the complete synopsis for Chicago Med Season 8 Episode 9 to gain a few more details today about what you could see:

Chicago Med Episode 8.09 Synopsis:- Halstead relies on Marcel and Med’s newly donated OR 2.0 to save his patient; Charles helps an elderly, confused patient who’s mourning the loss of his high school sweetheart; as their wedding day approaches, Choi and April run into some roadblocks.

The Chicago Med Season 8 Episode 9 will release on December 7, 2022, and air every Wednesday from 08:00 PM – 09:00 PM on NBC.  You can also stream this episode on NBC’s website, CityTV, Hulu, Peacock TV, and YouTube TV. If you want to watch the previous seasons of the show, you can buy them on Amazon Prime Video.

The first scene of episode 8 is Goodwin (S. Epatha Merkerson) introducing Dr. Justin Leo, the “newest member of emergency medicine,” to the Chicago Med doctors and nurses. First-year resident Justin has been a search and rescue specialist for the past ten years. When Blake Gallo, a member of the Chicago Fire, pays Justin an unexpected visit, it serves as our first crossover moment (Alberto Rosende). Gallo informs Justin that on his first day, he wanted to stop by and say hello while he was in the area. What’s going on, Gallo? To the firefighter, Dr. Will Halstead (Nick Gehlfuss) says. “It’s obvious that you two are acquainted.” Blake and Justin fist-bump like best friends, showing that the newcomer to Chicago Med has experience saving lives.

A patient’s arrival separates the best friends, but it is obvious that Justin will play a significant role as a new character in subsequent episodes. When a young woman called Gloria shows up to Gaffney Medical after being drugged at a warehouse party, Drs. Hannah Asher (Jessy Schram) and Nellie Cuevas (Lilah Richcreek Estrada) are already dealing with a much more serious situation. Hannah and Nellie collaborate to put together a rape kit since the woman has a strong suspicion that she has been sexually attacked. Gloria is quite wary and starts to worry a lot about the process being documented and possible medical expenses. While Nellie and Hannah try their best to allay Gloria’s concerns, something still seems to remain unspoken. The results of the rape test show that Gloria suffered injuries from a sexual attack, and a potential fingerprint pattern was discovered. Gloria asserts that she wants to return home despite Nellie’s suggestion of mental health assistance. Gloria declines Hannah’s advice to call the police and report the attack, claiming that “no one else can know” and that she wouldn’t be able to “file charges anyway.”

Until Nellie interrupts her, Hannah tries to persuade Gloria to report the assault. Gloria is informed by Nellie that her discharge papers will be prepared. Nellie objects when Hannah draws her aside and suggests that they discuss the matter further regarding reporting the attack. Gloria’s refusal to produce identification, absence of insurance, and fear of the authorities are all noted by Nellie, who expresses her strong suspicion that Gloria is an undocumented immigrant. Hannah tries to reassure Nellie that there are safeguards in place for undocumented immigrants who report crimes like sexual assault, but Nellie says that given recent occurrences, she can understand Gloria’s decision not to come forward with the information.

Later, Chicago P.D.’s Hailey Upton (Tracy Spiridakos), who is there with a patient called Chelsea, pays a visit to Gaffney Medical. Hannah is flagged down by Upton, who informs her that she is there to look into a possible rape. Gloria’s assault was probably not a one-off because Chelsea entered the precinct after passing out at a warehouse party in Pilsen. When Hannah and Nellie learn about these new circumstances, they debate the morality of persuading Gloria to report the assault. Although the report might support a claim, Nellie is adamant that Gloria can’t be trusted to be protected by the system, and she understands why Gloria wouldn’t risk her and her family’s safety by coming forward about the assault. Hannah counters that Gloria would benefit from filing charges in order to assist deal with the ongoing pain that the assault has caused.

Gloria’s mental health might be in danger if the incident is ignored. In this argument, nobody is in error. Gloria has the final say. Hannah encourages Gloria to accept their offer of treatment sessions when she sees her before her discharge. Nellie shows up just before Gloria departs and informs Gloria and Hannah that she is undocumented. Nellie is able to live and work legally in Chicago as a result of her professional path, but she continues to conceal her immigration status. Gloria is informed by Nellie that she is being told this because she trusts her and that Nellie and Hannah will support her if she ever decides to come forward and report the assault.