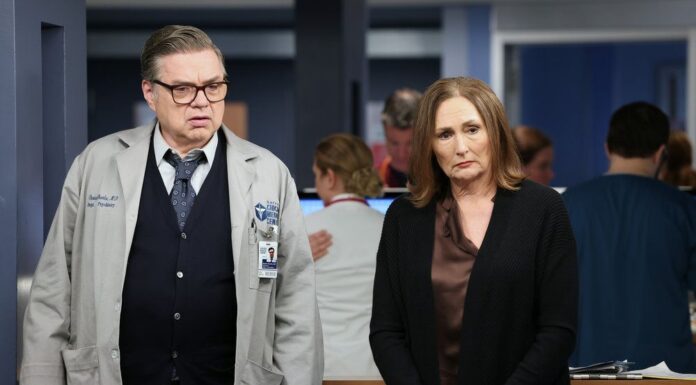 Chicago Med Season 7 Episode 19 will release on April 20, 2022, on NBC.  Ethan’s latest case will hit close to home. Ethan will assist Archer in treating a patient to treat who had ties to his father, Patrick Choi.

The last episode of Chicago Med was a rollercoaster of emotions! Not only did the episode provide an emotional plotline for Goodwin, in which her personal and professional worlds collide, but it also saw Brian Tee reprise his role as Dr. Ethan Choi.  (read the recap below) Do you want to know what will happen in the next episode? The most recent promotional materials for Chicago Med season 7 episode 19 including the promo, synopsis, and images can be found at www.tvacute.com.

Chicago Med Season 7, Episode 19 appears that It will be another tense episode. the new episode is called “Like a Phoenix Rising From the Ashes.” In tonight’s episode, Dr. Ethan tackles his father’s past. he appears to be diving headfirst into the drama. He’ll work with Dr. Archer (Steven Weber) to treat a patient who has ties to his father, Patrick Choi, who died in a car accident. Choi and his father have a tumultuous history on the show, as indicated by his father’s most recent visit in season 7. Other plotlines in the episode include Halstead and Archer teaming up to save the life of a surrogate baby. Archer is going to be busy this weekend, and Dr. Scott (Guy Lockard) attempting to help a patient who is struggling with their sobriety.

Chicago Med Episode 7.19 Synopsis:- Halstead and Asher work to save a surrogate’s baby; Charles cares for a patient on a hunger strike; Choi and Archer help a patient with ties to Choi’s late father; Scott and Maggie are stumped by a drunken patient who claims to be sober.

The Chicago Med Season 7 Episode 19 will release on April 20, 2022, which airs every Wednesday from 08:00 PM – 09:00 PM on NBC.  You can also stream this episode on NBC’s website, CityTV, Hulu, Peacock TV, and YouTube TV. If you want to watch the previous seasons of the show, you can buy them on Amazon Prime Video. Chicago Med Season 8 Confirmed

Dr. Scott has been having sexual relations with Milena, an undercover officer. Milena is unable to reveal her true identity. Not until her case is finished and Scott is informed. When her phone rings, he looks for it and notices stacks of cash, which he inquires about. It was not only not his place, but it could also jeopardize her job. Milena stated that this would be the last time they did this, and Scott had no one but himself to blame. On a man shot in a home invasion, he teamed up with Crockett. Gavin Welsh was the man’s name. The gun was left behind by his shooter. They also managed to get him alone, despite the fact that both his wife and children were out of town on a trip. The incident was reported to the family. Gavin might be damaged following the shooting, they cautioned her.

Gavin was submerged for a long time. There’s no way of knowing how severe his brain injury was, and his wife claims he wouldn’t want to live like that. Darlene signed a DNR for her husband. That way, he’d never have to live with a disability. Darlene agreed, and Scott spoke with an officer who tracked down Gavin. Gavin had no defensive wounds when he was discovered. Both Scott and Crockett had their suspicions aroused.they disobeyed his wife’s orders. The physicians worked on their patient till he was able to return to life. Darlene was incensed. She made her wishes known. the lawyers interrogated them. Scott’s lawyer refused to back him up on this. They told him that he had better hope Gavin woke up or Darlene will sue them. She was later cleared of being the shooter by the police. She couldn’t have traveled back in time to murder her husband because she was caught on camera having breakfast with her sister. Scott inquired of his officer pal if it was usual for an undercover cop to carry around $15,000 on her person. Gavin and Darlene reside in a nasty part of town, it turns out. It could’ve just been one of those evenings.

Goodwin was coping with her own personal dilemma in another part of the hospital. he was preoccupied with her daughter. Tara, her pregnant daughter, came to see mom, and over lunch, the daughter began to bleed. There were a few secrets Tara kept from her mother. She has fibroids, for example. She’s had multiple bleeding incidences, for example. It was expanding and needed to be removed before the baby’s development was jeopardized. Asher recommended surgery. Tara consented to the procedure. Asher discovered a new fibroid. It was too dangerous. Asher convened an ethical council after she refused to sign off on the extended surgery. Asher’s request was granted. She was able to complete the procedure in her own way, and both mother and baby were rescued. Tara will, regrettably, never have any more children. However, Halstead and a recently returned Choi had assisted an abused wife in avoiding deportation back to her husband. This would never have been done by the Choi of the past. He was a strict observant of the regulations. As a result, Halstead and Maggie were taken aback by the development.Scott, on the other hand, was able to verify that Gavin was not shot. Gavin took his own life. He was attempting to pass it off as a burglary because suicides are not covered by insurance. When Gavin awoke, he confirmed everything When Scott saw Gavin and her wife reunion, he decided to contact Milena.