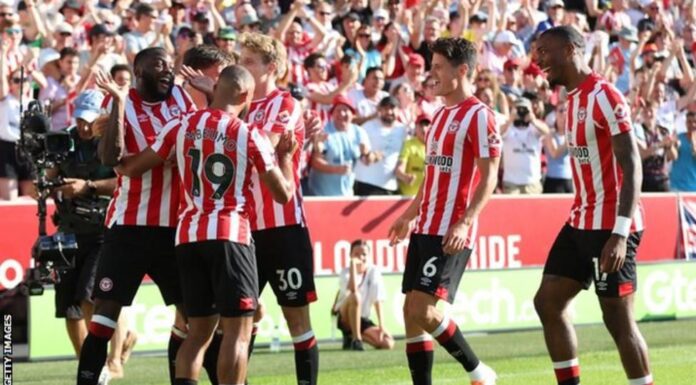 At the Gtech Community Stadium, Brentford outdid itself in the first half, scoring four goals in the opening 35 minutes to hand Manchester United a humiliating loss.

Josh Dasilva gave the hosts the lead with a long-range shot that miraculously escaped David de Gea of the United team. After taking down former Brentford star Christian Eriksen, Mathias Jensen doubled the advantage. Goals from Ben Mee and Bryan Mbeumo gave Thomas Frank’s team a four-goal lead during an unbelievable first half in which they completely destroyed United.

The loss is United’s seventh straight on the road, which is their worst streak since 1936. It’s also the seventh time since the start of the previous season that they have given up at least four goals in a league game. While United manager Erik ten Hag must rally his team in time for Liverpool’s visit to Old Trafford on Monday, August 22, Brentford can bask in a historic victory.

After being soundly defeated by Brighton the previous week, United tried to get off to a fast start. However, Brentford took advantage of the visitors’ remarkable defensive collapse against their hard-pressing hosts. De Gea, one of United’s most dependable players for a long time, was left looking foolish when he let Dasilva’s speculative long-range drive to slide underneath him and into the goal; Cristiano Ronaldo claimed he was fouled in the build-up.

A huge win for Brentford!

A dominant first-half performance from the Bees sees them take all three points. #BREMUN pic.twitter.com/5yY6CAEmRc

After a careless shove by Harry Maguire on Dasilva resulted in a booking, Mathias Jensen missed the ensuing free kick but was celebrating two minutes later after another United error. Jensen stole the ball from Eriksen when De Gea passed it to him on the edge of the United penalty area, then he slid the ball low into the goal to double Brentford’s advantage. It was another tough test of United’s character after falling two goals behind to Brighton the previous week, but things only got worse when Brentford scored twice in the space of five minutes to go four up.

After a hardly credible 35 minutes, Mee scored at the far post to make it three, and Mbeumo completed a quick counterattack by controlling Ivan Toney’s cross and looping the ball past a bewildered De Gea to make it four. Although there is still time for the Dutchman to turn around the team’s fortunes, the first two games of the season have shown the challenging task facing the former Ajax manager at Old Trafford. Manager Ten Hag could hardly have anticipated such a disastrous start to his reign.

After Tottenham in 2020 and Liverpool in 2021, Brentford is the third side to score four goals against United in the first half of a Premier League game. Despite the fact that the majority of the post-game commentary will center on United’s issues, Brentford, like Brighton the week before, merits recognition for their strategy and execution.

They tortured United from the first whistle on, denying the visitors time with the ball and, most importantly, seizing the opportunity to overtake their rivals. When Dasilva was about to advance, Jensen feed him after robbing Ronaldo inside the United half. Dasilva launched a low effort toward the goal that eluded De Gea’s hands because Lisandro Martinez, who was substituted at halftime, took too long to seal off the opening.

For the remainder of the first half, Brentford ran amok. Before Toney utilised his height advantage to defeat Martinez in the air and set up Mee, who scored on his home debut, the excellent Jensen predicted De Gea’s reckless ball to Eriksen and punished both players. The fourth goal encapsulated the disparity between the teams. The hosts blasted the ball long to Toney after Jadon Sancho was forced off the ball inside the Brentford box.

Toney slid Mbeumo in as United took their time to respond to the incoming counterattack. Mbeumo fought off Luke Shaw and scooped the ball home to set off wild celebrations from the home crowd. Raphael Varane, Scott McTominay, and Tyrell Malacia were introduced by Ten Hag in response, but his players appeared to be in shock and they were unable to create the remarkable recovery needed to save the game, allowing Brentford to cruise to a triumph that will live long in the memory.