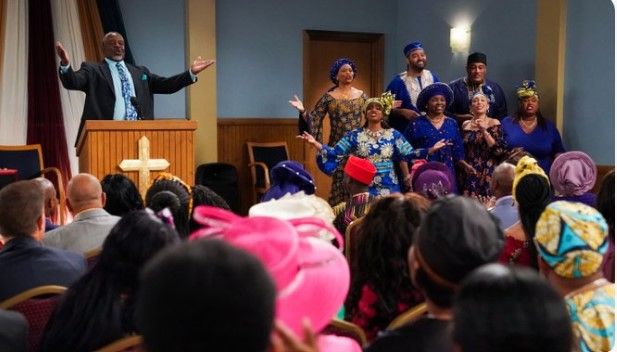 In the season finale, a new pastor arrives to spice things up. Do you want to learn more about Bob Hearts Abishola Season 3 finale?  Here’s (www.tvacute.com) everything you need to know about Bob ♥ Abishola Season 3 Episode 22 including the promo, and release date.

Bob Hearts Abishola season 3 episode 22 titled “Beard in Her Pulpit.” It will be the season finale episode. you’ll get to watch some great exciting stuff, but there will also be a few emotional moments.  Abishola is ecstatic when their congregation welcomes a new dynamic preacher, but her excitement is dampened when her mother begins to take an interest in the pastor. When Dottie hands out incentives to high management, Bob needs to take precautions to ensure that he does not lose his finest employee. Bob and Goodwin have some challenges to work through. At the end of the episode, a few things about the program might have changed. As we already know there will be a fourth season. so there is a possibility of a cliffhanger.

It looks like Bob and Goodwin have some issues they need to hash out on Monday's #BobHeartsAbishola season finale. pic.twitter.com/SydMBQkTER

Bob Hearts Abishola Episode 3.22 Synopsis: When a charismatic new pastor joins the congregation, Abishola takes a new interest in church; after Dottie gives out bonuses to upper management, but not Goodwin, Bob must do what he can to make sure he doesn’t lose his best employee.

Bob Hearts Abishola Season 3 Episode 22 will release on Monday, May 23, 2022, at 8:30-9:00 PM, ET/PT PM, ET/PT on the CBS Television Network, and available to stream live and on-demand on Paramount+ once it airs on television. . You may also watch the new episode on CBS’ official website.  If you’re a cord-cutter, you may watch the forthcoming episode on DirecTV, YouTube TV, iTunes, Vudu, Google Play,  FuboTV, Amazon, Hulu, Spectrum, and Xfinity’s live TV streaming and VOD services.

Share
Facebook
Twitter
Pinterest
WhatsApp
ReddIt
Previous article
NCIS Season 19 Episode 21: Parker is framed for murder in the finale – Is the team ready to find out uncovering the truth?
Next article
All American Season 4 Episode 20: Spencer focuses on the Big Homecoming Game in the Finale