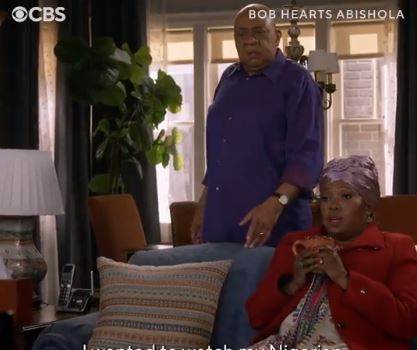 In the previous episode of Bob Hearts Abishola Season 3, a little upsetting for Bob, as well as Abishola, who is trapped in the middle between her mother and her husband. Ebun and Olu bring Tunde into their quarrel, but after he leaves irritably, they all gossip about him. (Read Recap below) What will happen next? To know this we have to go further. Here’s (www.tvacute.com) everything you need to know about Bob ♥ Abishola Season 3 Episode 10 including the promo, release date.

“Tunde123” is the title of the tenth episode of Bob Hearts Abishola. Abishola will be concerned that Dele will e spoiled by the American way of life. After learning that Tayo has given Dele a credit card, she will be harsh with him. he’s being spoilt and that he has to be reined in. Abishola’s fears would eventually cause her to be too harsh with her kid. Bob, on the other hand, will want to help Dele in some way. In Bob Hearts Abishola Season 3 Episode 10, he will plan to do something special for Dele behind Abishola’s back. Furthermore, Ebun’s judging practices will continue to upset everyone. In the next episode, she will meddle in other people’s lives and bring them problems. As a result, she may find herself in another disagreement with her daughter.

Bob Hearts Abishola Episode 310 Synopsis: When Abishola finds out Tayo has given Dele a credit card, she worries he’s being spoiled and becomes stricter with him; worried Abishola is being too harsh, Bob goes behind her back to do something special for Dele.

BRB, going to go update all our passwords…and our calendars for Monday's NEW #BobHeartsAbishola. pic.twitter.com/dRGtcEuUra

Bob Hearts Abishola Season 3 Episode 10 will release on Monday, January 3, 2022, at 8:30-9:00 PM, ET/PT PM, ET/PT on the CBS Television Network, and available to stream live and on-demand on Paramount+ once it airs on television. . You may also watch the new episode on CBS’ official website.  If you’re a cord-cutter, you may watch the forthcoming episode on DirecTV, YouTube TV, iTunes, Vudu, Google Play, YouTube, FuboTV, Amazon, Hulu Live TV, Spectrum, and Xfinity’s live TV streaming and VOD services.

Episode 9 is a little upsetting for Bob, as well as Abishola, who is trapped in the middle between her mother and her husband. When Bob pushes Abishola to join him at Tunde’s house, she becomes suspicious that Bob is up to something. When she arrives, she is pleasantly surprised to see Dele and her mother Ebun, who Bob had invited to visit. From the beginning, Ebun is quick to point out flaws in everything, from her daughter’s apparent weight increase to Bob’s lackluster business performance.

When Ebun arrives at Bob and Abishola’s house, he immediately starts bossing everyone about and makes Bob feel awful for only winning the Businessman of the Year award once. While Abishola and Dele catch up with one other, Bob is angered by Ebun’s comments regarding his ability. Abishola and Dele try to defend Bob in front of Ebun at first, but their efforts are in vain. Abishola also tries to console Bob, but when Ebun continues to complain, the mother and daughter get into a huge fight.

Ebun decides to live with Olu and Tunde, but soon finds herself arguing with Olu. When Abishola informs Gloria and Kemi of the problem, they both have opposing viewpoints on what she should do. Meanwhile, Bob tells Dottie, Christina, and Douglas that he wants to extend MaxDot, but they oppose his planned alterations and reassure him that he has accomplished a lot already. Finally, Ebun and Olu bring Tunde into their quarrel, but after he leaves irritably, they all gossip about him.