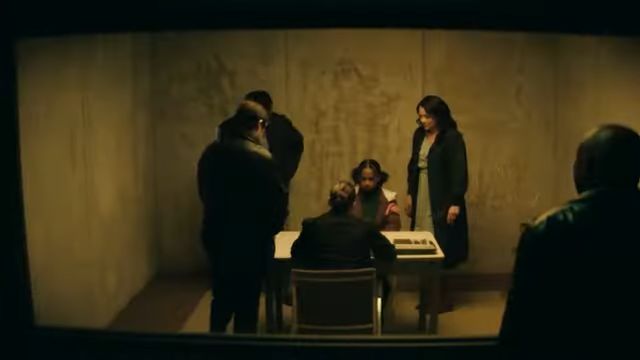 The previous episode 6 oh BMF,  demonstrated why Lamar is one of the most bizarre characters we’ve ever encountered. He killed not just his right-hand man Slick, but also an innocent boy in Darius because he’s losing his grip on reality. he kept his vow to Slick that he’d go after the people Meech and Terry care about before he killed him. This undoubtedly had far-reaching consequences, since two more bodies were discovered on the streets, and Meech and Terry will realize that they must act against Lamar. Meech, on the other hand, is working with Tiny and the 12th street boys who turned on Lamar; Pat, on the other hand, was not making it easy for them with his ugly words on the street. Terry also discovers that B-Mickie is having an affair with Kato. And elsewhere, we have Charles and Lucille who believe they can still save Terry.

Only two episodes are left and the final two episodes of BMF Season One will air on November 14 and November 21 as part of Starz’s November 2021 lineup. Fans of 50 Cent’s Black Mafia Family are looking forward to the upcoming new episode 7 after watching episode 6. “All in the Family” is the season’s penultimate episode and seventh episode of the first season of BMF. There are going to be a lot of fireworks in this episode. Without a doubt, today’s unique promo adds to the excitement. Tvacute.com has a preview and synopsis for Black Mafia Family Episode 7, which includes a recap of BMF Episode 6.

BMF Episode 7 Synopsis: Blood spills into the streets when Meech devises a plan for revenge, forcing Lamar to seek shelter with someone close.

BMF New Episode 7 will release on November 14 from 9:00-11:00 p.m. ET on Starz.  The drama series Black Mafia Family has an eight-episode. BMF Episode 1 is available for streaming on Starz also available on HULU. The series premiered worldwide across all Starz platforms.

Meech and Terry were graduating via the streets, learning their lessons, such as how Pat made it tough for him to do business with Que. Tiny from the 12th street lads arranged up a meeting with Que in order to strike up a deal to sell his bricks as well, but Pat declined the opportunity to work with him because he had been spreading nasty comments on Meech’s neighborhood. when they did, of course, establish a deal.

But first, let’s speak about Lamar’s bizarre business practices because, in today’s episode, he dumped not one, but two bodies. When you saw Lamar waiting for Meech with a shotgun ready to shoot him, you knew exactly where the show was going. This episode was bound to have a corpse drop, it was only a matter of who and when, but lucky for Meech, he had backup, which he had for his entire family throughout the show.

when Meech kidnapped Zoe, Lamar would do the same, if not worse. Terry told Meech that they should never have taken Lamar’s child, but Meech called it a soft kidnapping because he took her to get ice cream. he took Zoe without Monique and Lamar’s permission and held her until he got the information he needed from Slick, which was where his stash was hidden. And Slick knew he was doomed either way: either he bought Zoe back but gave up the cache,.

But before that, we observed Slick holding Lamar’s back when the 12th Street Boys were being hanged. Lamar came in and informed them that they were about to attack the Flenorys and that he needed them to distract his bodyguards so he could attack them. But Lamar’s problem with Meech and Terry was a personal one, and Tiny wasn’t scared to tell him about it, even if he was nearly choked to death by Lamar in the previous episode, but this time was different. He had the 12th street boys’ support this time. The 12th street boys backed him up, and they all put their guns to Lamar’s head. But Slick stood with Lamar at this moment but before things got any worse, Detective Bryant arrived. He warned Lamar. but Lamar tells him that he’s a changed guy.

Now Slick told Lamar that Tiny now has the entire crew behind him, but Lamar only has one mission right now, which is to bury Terry and Meech, but Slick tried to give Lamar the big picture, telling him that he could get everything back and make things right with Monique, but Lamar couldn’t see straight because he was too angry. because Meech took Zoe, Slick gave up the stash house, he can’t get near Meech and Terry because of the protection they have, he doesn’t have a crew anymore. but Slick tried to help Lamar, telling him he had to get Monique back before he could do it again. And Lamar did follow Slick’s advice and try to make things right with Monique. B-Mickie has been with Meech from day one and is the third in charge in their organization, so he told Terry to throw him a brick. Terry didn’t just throw him a brick; he provided it to him at a reduced price. Terry may have a terrible eye, but he surely noticed this at B- Mickie’s, which was Kato’s. Terry told Meech that he thinks he’s sleeping with Kato.

Lamar still on the streets was always going to be difficult, Cut off their water supply, as Slick advised, which he did when he hit one of the youths Meech and Terry’s crew were moving their weight. And now Meech realizes that they can’t continue doing business as usual; they need to do something about Lamar, and they need to get rid of him in some way. indeed, Slick intended to go as far away from Lamar as possible, but he didn’t get that far. It was his idea to go patch things up with Monique, but it didn’t work for Lamar. He stabbed him twice and sang “Can’t Stop the Rain” while he stood there watching Slick gasp for oxygen, then he placed him behind Tiny’s sofa to send him a genuine message.

But, if you thought Lamar was insane, wait until you see what he did next. He informed Slick that he was going to take someone from Meech and Terry’s family away, but when Nicole and Darius’ bodyguard went missing, Lamar pounced on them. But, while Nicole escaped, Darius was not so fortunate, and he didn’t deserve it. There was no justification to kill Darius in this manner, and not only did he stab him once, but he stabbed him again, apologizing as he did so.