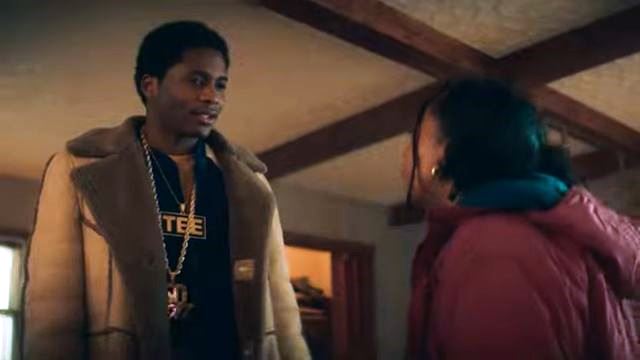 In the previous episode 5 oh Bmf, we saw Monique kick Lamer out of the house, and that dude tiny is doing business with Meech. Mom finally discovered the truth that both Meech and Terry are drug addicts. Lamar is making a mistake by allying with 50 boys from the 12th Street gang.  After watching episode 5, The next new episode 6 of 50 Cent’s Black Mafia Family is eagerly anticipated by his fans. The sixth episode of the BMF season 1 is named “Strictly Business.” This is going to be a massive fireworks episode. Today’s special promotion, without a doubt, adds to the excitement. Black Mafia Family Episode 6 promo and synopsis may be found on Tvacute.com. includes a recap of BMF eps 5.

BMF New Episode 6 will release on October 31 from 9:00-11:00 p.m. ET on Starz.  The drama series Black Mafia Family has an eight-episode. BMF Episode 1 is available for streaming on Starz also available on HULU. The series premiered worldwide across all Starz platforms.

Interview with Terry’s family versus hospital counsel. No judge is present, but the debate is savage and not in Tee’s favor, as they accuse him of being a drug dealer, putting himself in danger with his job, and causing the damage when he tried to leave the hospital and fell out… Younging reminded his mentor of the first thing he ever taught him… never get high on your own supply. Meech was excommunicated after Pat slapped him! The hospital offered $25K, but the family felt it was inadequate. Lucille asked Terry if he was dealing with Meech. . Lamar was making progress with Monique and Zoey. He wanted to pick her up but was always late. Monique let him try, but uncle Meech got her first. He made her happy. Lamar was late. A man came to give him an ultimatum. To give up his loot for his daughter…

Lamar gathered his workers to remind them that his daughter was first. But when one of the goons, Tiny, stood up, Lamar choked him out in front of the crew. An emergency page from Meech to meet at her residence came to Kato and B-Mickie after they had finished sleeping together. In the meantime, Meech and Tee wanted her to watch Zoey. Kato lied when asked if she knew anything about Lamar’s daughter being taken by the BMF brothers. .. Terry considered killing Lamar as a final option. But Meech straightened him up since he didn’t want them implicated in any more killings, especially after Jame-death. mo’s Lamar headed to Kato’s, but Zoey wasn’t there, Meech had just taken her out back. .. A man was questioned regarding Jame-disappearance mo’s at DRANO. He was quite detailed with numbers claiming to have seen the individual who took Jame-mo the night he went missing. Det. Bryant was in the room, uneasy. In a lineup with Meech’s mugshot, the man said he wasn’t there. Bryant let him go. The cooperator looked back at Bryant as a suspect. Lopez said Jame-mo may have lost a diamond earring in the abduction. So Bryant investigated his car and found Ajay’s earring!

Lopez almost caught him but he dodged. . Lamar told Monique that Meech had Zoey. He needed to know where Meech resided since she was enraged. She only knew he was in The Hole. Lamar told the crew to head southwest. Slick limped (from being shot in the leg.) He and a few 12th Street Boys drove to Terry’s. But Terry and his gang outwitted them and threw Slick and his gang in the trunk. Slick, chained and abused, refused to give up the stockpile. Terry tried to reason with B-Mickie, but he was a jerk. Tee lost his cool after Slick insulted him, and they stomped him. He ordered them to liberate Slick. Meech offered him the female in his car. Slick can either be the hero and safely return Zoey to Lamar and Monique by handing up the cache, or he can be revealed as the murderer. Slick chose heroism.

To Lamar and Monique, Zoey returned. Then Zoey told her mother how much she enjoyed Uncle Meech. Monique sneered and warned Lamar to keep away. Terry told LaWanda about the hospital’s offer and encouraged her to accept it. Rather than his brother’s drug money. . Pat called Det. Bryant and offered him bribes versus Meech. Bryant declined Pat because he is a unique player. Terry stopped Meech from approaching the woman. Tee would meet him alone since the plug thought he was too flamboyant. Det. Lopez and Det. Bryant went back to see the witness, but he had left. Then Bryant confronted Meech about the heat from Jame-death mo’s and returned the money, ending the deal. Lopez had followed Bryant, but he was observing the discussion.. Terry later bought the re-up from the new plug. He took the parcels to his mother’s and was amazed at their medical supplies. Terry questioned Meech about the game getting old, but Meech retorted that it revitalized him. Lucille overheard the brothers’ conversation. She dropped a glass and screamed. She found out Terry was lying and trafficking drugs…….