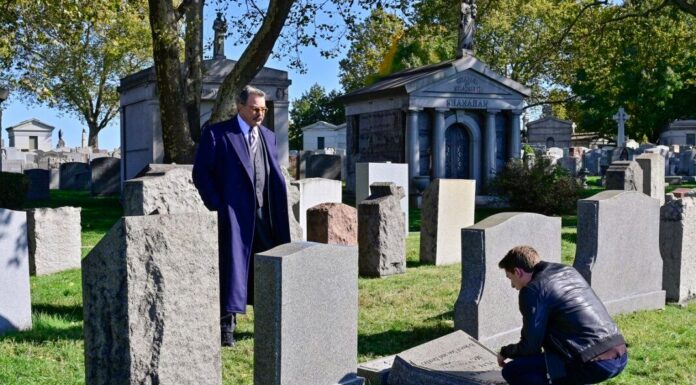 Things take a more personal turn on the long-running family police drama Blue Bloods when Frank (Tom Selleck) and his grandson Joe (Will Hochman) take action to defend the honor of Joe’s late father, Joe Reagan, who was killed in the line of duty. An episode helmed by series actress Bridget Moynahan has a guest appearance by Bonnie Somerville as Joe’s mother, Paula Hill. In the episode, Erin, played by Bridget Moynahan, and grandpa Henry, played by Len Cariou, work together to stop a phone scammer who preys on old people.  For a detailed explanation of everything that happened in Blue Bloods Season, 13 Episode 9 Recap continue reading at tvacute.com

Danny, their lone witness in the Bardo murder, refuses to testify as the episode opens. Maria claims that the retrieved gun’s ballistics don’t match either. The wife of Danny’s first partner, Naomi Dixon, stops by the precinct to visit Danny. Naomi tells Danny that Johnny has been on an undercover case for the past few months and is not himself as they enter a room to discuss. He snorts cocaine, drinks, and shouts at the children. She should talk to his handler, Danny says. She begs him to speak to her husband because she is confident he would take her side. Eddie and Luis are walking the beat when a young girl selling hot cocoa and cookies stops them. She is trying to save money for a new puppy after a man took hers.

Elyse is the name of the young girl, and Pickles, her dog, was caught. When Donna, an old friend, is spotted by Henry at a store and he notices that she has purchased several gift cards, he becomes suspicious. Frank is at Joseph Conor’s grave in the cemetery and notices that the son is broken and on his side; he claims that this is not proper. While Joe is there, he tries to lighten it but is unable. Frank responds, “No, I’ll delegate,” to Joe’s claim that he would track down the perpetrator. Danny and Maria visit Johnny, who is surprised to see them. He is reminded by Maria that Naomi spoke to him after the accident he was in last week. He is instructed to control his ass by Danny. Danny asks why Johnny is performing his job, and Johnny replies that he is. The exchange is not successful. Eddie and Luis visit McNichols to ask him to have someone look into Elyse’s case.

Henry visits Donna, brings her flowers, and expresses regret for harbouring misgivings when they first met earlier in the day. He tells her about a gift card scam, and it turns out that she was duped out of $6,000 in that particular scam. They are experts, he informs her. While in his office with his crew, Frank learns that Joe is spying on them because he disregarded Frank’s advice. At Elyse’s hot cocoa station, Eddie and Luis discover McNichols conversing with Elyse and her father. Eddie is unhappy because McNichols pretended the lawsuit was pointless and is now talking to them. For assault, Danny and Maria detain Johnny.