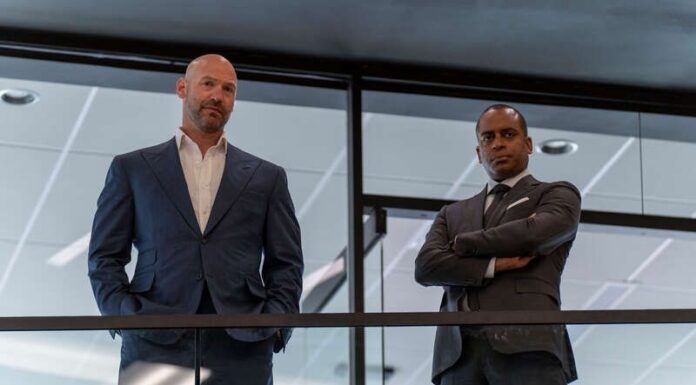 In Billions Season 6 Episode 3, Prince pushes one of his competitors to the brink of defeat, then rides in to save his bacon and enrich them both. It’s a bargaining feat so impressive that it sends Prince’s adversary Chuck Rhoades into the street, wielding a bullhorn instead of his Attorney General’s authority. Prince intends to proceed with a Manhattan stadium after all. Ben hears that Mafee and Stern’s organization is snatching up land in advance of New York City’s 2028 Olympic bid as a buddy of Mafee’s who left the firm with Dollar Bill after Bobby Axelrod’s expulsion. What will happen next? www.tvacute.com has brought more information about the Billions Season Premiere for you which you can watch below.

Billions do a fantastic job of drawing comparisons between Chuck and Prince. Whereas Chuck vs. Axe was always more of a basic Good vs. Evil struggle, this confrontation feels more complicated. These men will have to face their genuine objectives and how they present themselves to the public and those closest to them at some point, and they may not like what they see.

The title of the fourth episode of the sixth season is “Burn Rate.”  In Billions season 6 episode 4, there will be a lot of drama. We well know that Mike Prince adores being the center of attention and would go to any length to maintain it. He is desperate to get this Olympic Games bid approved. He is, however, having difficulty ensuring that things go his way, and he may be seeking additional assistance.  Wendy may eventually play a role in this situation. . Meanwhile, Scooter and Wags will have to work together to keep the games safe.

Facing political headwinds against the Olympic Games, Prince turns to Wendy for help. Meanwhile, Scooter and Wags must work together to help secure the games. Taylor chases a holy grail play and Sacker makes a big decision.

The episode begins with a late-night rallying cry from Ben Kim, one of Prince Cap’s recently acquired army’s more hesitant troops. Ben hears that Mafee and Stern’s organization is snatching up land in advance of New York City’s 2028 Olympic bid as a buddy of Mafee’s who left the firm with Dollar Bill after Bobby Axelrod’s expulsion. Todd Krakow, the disgraced former Treasury Secretary, is their bankroller (the ever-delightful Danny Strong).

Prince offers an alliance but is denied, rather than allowing Krakow to push him out of the position he had planned to assume. So he makes his case to Tess Johnson (Gameela Wright), the city’s new mayor, urging her to speak out against plans to build a new stadium in Manhattan, which is considered critical to the Olympic bid.

Kate Sacker, Chuck’s ace, reveals Krakow’s role in the Olympics ruse and kills his multiple land deals at the same time. Krakow dashes into Chuck’s office, wanting to know why on earth he would assist Mike Prince in such a situation. Chuck, who had no idea Prince was involved, tells Krakow to resubmit his real-estate proposals on the up-and-up rather than through shell companies, so he can stick it to Prince.

The mayor’s anti-stadium news conference, on the other hand, destroys Chuck and Krakow’s anti-Prince strategy, driving Krakow and Prince into one other’s arms. Krakow is the place to be if you want to get a good deal. The money is in Prince’s hands.
Now all Prince needs to do is find a way to appease personnel with sentimental attachments to the competing firm founded by Mafee and Dollar Bill, such as Ben Kim, Taylor Mason, and Wendy Rhoades. This he provides in the shape of a bailout from the venerable I-bank Spartan-Ives; it’s enough for Mafee to resume his weekly dinner meetings with Taylor, let alone save his and Dollar Bill’s firm, High Plains Management. (Its logo is two six-shooters crossed.) Yee-haw!)

Prince intends to proceed with a Manhattan stadium after all, now that he has his ducks in a row. He woos her back with the promise of transforming the athletes’ quarters he proposes to build into low-income housing, despite having single-handedly persuaded the mayor to oppose such a development. It’s enough to persuade her to participate in a joint press conference to promote the city’s Olympic aspirations. Chuck, however, is not about to be outdone after his victorious fight with upstate billionaire Melville Revere. Outside the news conference, he practically blocks traffic, then begins marching on top of the stopped cars, megaphone in hand.

Wags still has the office next to the boss’s, but after seeing Scooter schlep back and forth from his far-flung quarters, he ultimately relents and gives the space to his replacement. Dunbar, no dummy, sees through the ruse and offers Wags half of his office, which fits in perfectly with Prince’s continuous insistence that the two men work together, which they do admirably in wooing the suave Colin Drache (Campbell Scott). They grease the wheels for Prince’s Olympic bid in New York by bringing him on board, but it’s their shared, teary-eyed love of Harry Chapin’s song “Cat’s in the Cradle” that truly cements their new collaboration.