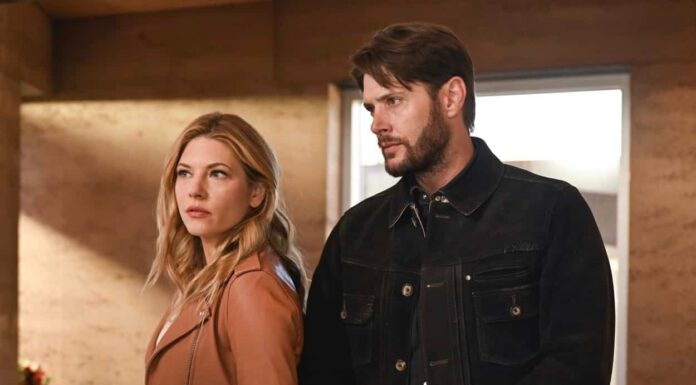 The Western thriller Big Sky, which has been extended for a third season, ends its second season with the arrival of a new sheriff. While the case against the drug-dealing Bhullars draws to a head, undersheriff Jenny (Katheryn Winnick) continues to seek undercover operative Travis (Logan Marshall-Green) in order to prevent him from doing something he’ll regret.

Are you curious to learn more about Big Sky season 2 episode 18?  Allow www.tvacute.com to supply you with all of the information you’ll need to watch the latest episode 18 of ‘Big Sky Season 2.

Big Sky’s season 2 finale, titled “Catch a Few Fish,” has here. Jenny (Katheryn Winnick) is torn between what her heart desires and what her intellect tells her as she strives to locate Travis (Logan Marshall-Green) before he reaches a point of no return in the season finale. Ren (Janina Gavankar) and Jag (Vinny Chhibber) discover common ground and form a new familial bond as they try to figure out how to deal with their father (Bernard White) now that he’s crossed a line. Meanwhile, Cassie (Kylie Bunbury) changes the path of her search for justice forever after getting a stunning revelation from Scarlet (Anja Savcic). With Sheriff Walter Tubb (Patrick Gallagher) temporarily out of service, he enlists the help of an old acquaintance, Beau Arlen (Jensen Ackles). Beau arrives in town as the town’s interim sheriff (and Jenny’s new boss). Lindor (Omar Metwally) believes The Syndicate is also on the lookout for Scarlet.

Big Sky Season 2.18 Synopsis:  In a struggle between head and heart, final resolutions are made as Jenny works to find Travis before he reaches a dangerous point of no return; meanwhile, Ren and Jag find a new familial bond and decide together how to handle their father now that he’s crossed a serious line. After receiving a startling surprise from Scarlett, Cassie changes the course of her quest for justice forever. Later, with Tubb out of commission for the time being, a new sheriff comes to town; and after getting fully acquainted with Cassie and Jenny, it seems like he may just stick around for a while.

Big Sky Season 2 Episode 18 will release on May 19, 2022, at 10:01-11:00 p.m. EDT on ABC.  Subscribers to Hulu can watch the show the next day on-demand online or live to stream it on Hulu+Live TV. the show is available on Fubo TV, DirecTV, YouTube TV, and Xfinity, among other platforms. You can also buy or rent episodes on Vudu, iTunes, Amazon Prime Video, Google Play, and Microsoft Store.

Jenny goes to the hospital to see Tubb and runs across the man who killed Wolf, who is dressed as a nurse. Jenny, suspicious of him, has a guard stationed outside his room. Veer is picked up from the airport by Jag, who informs him that he should resign. Veer is offended by his son’s statements, but when the two return home, Richard Ford kidnaps them at gunpoint. Cassie and Jenny go to the Bhullar’s, assuming Richard will finally show up, and discover Ren and Travis tied up. They abandon them to look for Richard. Richard leads Jag and Veer to the beach where Mason was killed, where he shoots Jag before Veer flees. Jag is arrested by Cassie and Jenny, and he is taken to the hospital, where he survives. Ren informs Travis that she is aware that he is a cop. Later, she informs Jenny that she is aware of Travis’ true identity. Scarlet robs a restaurant and runs right into Wolf’s assassin.

She gets away from him and then gets away from him again when he follows her to a rest-stop washroom. Tubb informs Jenny that a temporary sheriff is on his way to town. Veer is told by Alicia that it is time for him to leave. Cassie goes to a bereavement support group. Ren pays a visit to Jag, who has recovered from surgery. Later, when she takes Veer to meet Jag, he apologizes and informs her that it is time for him to stand down. Scarlet phones Cassie and says she has knowledge about the syndicate and wants to make a bargain with her, but Cassie refuses. Travis travels to Jenny’s residence to say his goodbyes before continuing with his plan. Scarlet, with Phoebe in tow, stands close in their car, watching Cassie.