And Just Like That Episode 6 “Diwali” Release Date and Promo 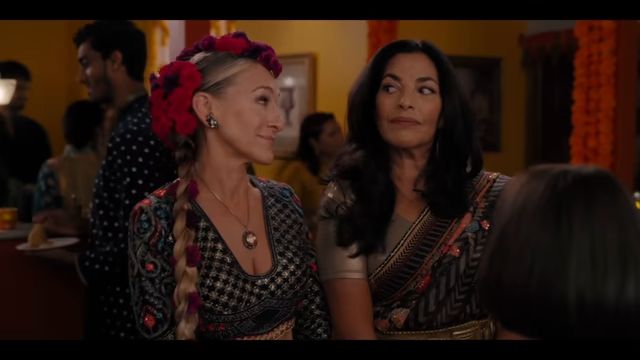 Sex and the City was one of the most popular television shows in the late 1990s and early 2000s, lasting six seasons and spawning two feature films. The franchise returned in 2021 for a whole new chapter, And Just Like That, after being virtually idle for the better part of a decade. In Episode 5 of And Just Like That, Carrie felt old because of a new illness. she was bullied into going to the doctor by her new friend, Seema. She learned that her pain is caused by a congenital birth defect, not “old lady disease.” By the end of the first half-hour, we see Carrie dressed up for a night out in heels. Miranda, on the other hand, maybe feel young again because of a new spark. Now fans are looking forward to the next new episode. And Just Like That Episode 6 has a promo for the release date as well as a spoiler at www.tvacute.com.

“Diwali” has been revealed as the title of episode 6.  There will be a chance to learn more about Carrie’s move downtown when she comes. When she was younger, she had a lot of good memories there. This is going to be a chance for her to do something new and different. When it comes to Miranda and some of the other characters, she’s still in a place where she has to deal with her feelings and all the problems that come with them. Charlotte, on the other hand, needs a few hard lessons in cultural sensitivity, at least for her doll collection. You can see a preview for this episode below.

And Just Like That Episode 10.6 Synopsis: Carrie’s giant leap for her future self helps her embrace the past, while a confession from Miranda shocks Charlotte. Also, Anthony asks Carrie for a favor.

On January 6th, 2022, the sixth episode of And Just Like That will be released. The new episode will be available on HBO Max in the United States at midnight Pacific Time, which translates to 3 a.m. Eastern Time. Meanwhile, fans in the UK can watch episode 3 on Sky Comedy and Now TV starting at 8 a.m., with the following chapter airing at 9 p.m. on both Sky’s Comedy and Showcase channels.

This journey begins with hip surgery. Carrie needs treatment for an undiscovered congenital birth abnormality uncovered by Seema’s orthopedist relative Vikash. Then they give you a handsome physical therapist named Travis and tell you he’s not covered by insurance so you have to pay out of cash. Sure, it’s sad to see a widow used like this. Miranda was assigned to Carrie’s recuperation. Instead, Miranda allows Carrie’s podcast employer Che in with a bottle of tequila. That way, they don’t hear Carrie wake up and wet her bed.

Carrie and Miranda quarrel over a pee-soaked mattress after Che goes to do stand-up in New Jersey. Miranda then snaps, claiming she is unhappy, hates her marriage, her life, and herself. When Miranda says Che gave her the best orgasm of her life, Carrie finally stops berating her for making her sit in pee for two minutes. While making a drink and guffawing to Che’s stand-up in her kitchen, Miranda remembers she drunk-ordered Quit Like a Woman, an alcohol cessation book she had previously accused Charlotte of sending her. Her negroni sinks. Miranda’s bender will be remembered for generations to come through the art of storytelling.

Charlotte learns via a Zoom conference of the mums that Rose is now Rock and Rock’s pal Ely is now Scout. Charlotte and Harry had to watch a TikTok. Not sure if Rock has gone viral yet, but we got images from mums LTW, Ainsley, Veronica, Deirdre and Catherine. Go, rockstar. For emergencies, Charlotte has been doing a lot of burpees so she can sling Carrie over her shoulder when she needs to urinate in the hospital. We now know Theresa Giudice is a Charlotte. Back to Rock: Harry and Charlotte meet with Rock’s teachers and are accused of being absent parents. They walk along a hallway toward a bright light, reassuring each other of their parenting skills.

In 1999, you spent a minute in Carrie’s vagina pulling her diaphragm out while she was drunk on medications and wearing an Easter hat. Charlotte texted you to warn you, using your first and last name. It didn’t bother Carrie because you’re in London, but Charlotte made a great point about how she still reads the Daily Mail while being out of town. We knew you wouldn’t mind because all press is good press. That’s why you said, “I appreciate that your vagina is getting some air time.” Carrie is back in her high heels three months later, likely thanks to weekly deep-tissue lower-body massages from Travis.