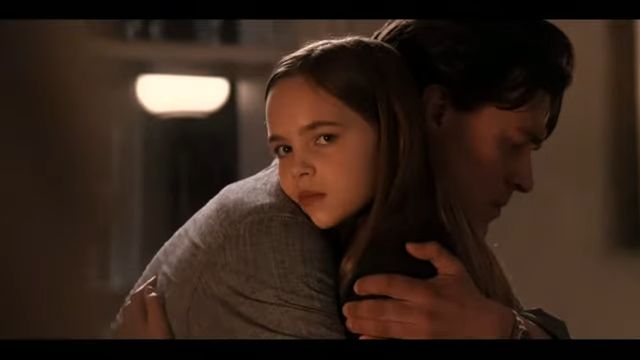 In the penultimate episode of AHS Double Feature, The Gardner family’s situation continues to deteriorate. When Doris says she feels like she’s dead, Harry responds, “Not quite.” Or when Doris sees Alma sucking the blood from her infant brother’s foot. When Doris finds teeth marks on the baby’s leg, she becomes concerned. Rather than continue to deceive Doris with additional lies, Alma goes rogue and tells her the truth. She even offers her mother a medication, which Doris initially rejects. Alma is able to persuade her to take the tablet. knowing full well that she lacked the necessary aptitude to make it work. Ursula brings Alma to meet with the Chemist at the end of the episode, hoping that Alma’s young girl charms will help negotiate a bargain. In the end, they find on their way a completely zombie-infested Doris and the heartbreaking death of Mickey. To see how things turn out, we will have to move on to the new episodes of Double Feature Part 1″Red Tide”.  www.tvacute.com has included the promo for American Horror Story Season 10, Episode 6, along with information on how to watch it. What is the plot of AHS Double Feature episode 5, and when will it be available to watch? What you need to know is right here. also, read the AHS recap below.

American Horror Story: Double Feature has been awarded the title of “greatest AHS season” by TV reviewers according to popbuzz. Critics have now entered the discussion, On Rotten Tomatoes, season 10 of American Horror Story is the highest-rated season of all time. The site has granted the current season of AHS a 95% rating.

American Horror Story: Double Feature, which is nearing the halfway point, is already shaping up to be one of the most enjoyable and well-balanced seasons yet. Double Feature of American Horror Story Next week, Episode 6 will air, marking the end of the first half of the season. we’re getting near to the second half of the plot. But what will the sixth episode of American Horror Story: Double Feature, dubbed “Winter Kills,” be about?  Ursula (Leslie Grossman) will create a nefarious plot in the last episode of “Red Tide” to gain what she really wants: control over the production of the black pill so she can open a boutique agency and hire the best entertainers in the world. Meanwhile, the Gardners’ last act will be written by Harry (Finn Wittrock), Alma (Ryan Kiera Armstrong), and Doris (Lily Rabe).

What time does the sixth episode of AHS Double Feature air?

AHS Double Feature; Finale Episode 6 titled “Winter Kills,” premieres on FX on Wednesday, September 22 at 10 p.m. ET.  The following day, Thursday, September 23th, the episode will be accessible on FX on Hulu. At 5 a.m. EDT, the streaming platform updates the collection with new episodes. As a result, AHS S10 E6 should be available around that time on the platform.

The new episode 5 of Double Feature can also be viewed with your active cable subscription data on FX’s official website or FX Now. Live TV streaming services such as Fubo TV, Philo TV, Sling TV, YouTubeTV, DirecTV, and Hulu + Live TV are available to those without a cable subscription. A day after the episode airs on television, it will be available on Hulu. The seven-episode season of the all-new American Horror Stories anthology program is also available exclusively on Hulu.

American Horror Story: Double Feature begins. We get a glimpse of Mickey, and Karen notices that he has a new automobile. He’s living the Hollywood dream. She attempts to communicate with him, but he has fallen so far. She doesn’t want anything to do with them, so she heads to the beach. She attempts to paint on her own. Belle is adamant that Karen retrieve the Gardners’ baby, or she would lose her one ally.

Doris ultimately gives birth to the baby after the bittersweet arrival of Harry. The husband sips his wife’s blood from little bathroom cups after wringing it out of her filthy linens. back to the house, Doris When Doris says she feels like she’s dead, Harry responds, “Not quite.” Doris finally witnesses Alma sipping blood from her brother’s foot when she wakes up. Things are clearly not going well at this point.

Alma is unconcerned about frightening her mother by playing after swallowing infant blood. Alma says, “I’m still not sure why you keep her around.” “Daddy, we’re aiming to be exceptional at something. People like her are only interested in getting through the day.  Ursula succeeds in convincing Doris that the whole incident was a dream, and she even tosses in some light body shaming for good measure but her plan backfires when Doris finds tooth marks on the baby’s leg. Alma reveals everything to her. She even offers Doris a medication, which she flatly refuses at first. Alma manages to persuade her that taking the pill isn’t such a bad idea after all.

Doris quickly realizes, however, that she lacks the same level of talent as her husband and daughter. In any case, Doris’ body begins to change into “one of those pale, odd homeless creatures wearing AIDS-era couture,” as Holden would put it. And she doesn’t look good in it. Harry manages to prevent Doris from assassinating his new blood supply. Alma even acknowledges that she and Ursula purposefully gave Doris the pill, knowing full well that she lacked the necessary aptitude to make it work. Ursula says as a way-too-smiley Harry and Alma watch Doris 2.0 drift into the streets. Ursula brings Alma to meet with the Chemist at the end of the episode, hoping that Alma’s young girl charms will help negotiate a bargain. On their route, they found a full zombie Doris.

Karen resists, and she even persuades Mickey to help her “save” the baby, but the plot backfires when they run into Doris in the middle of her change. Karen and Mickey manage to flee, but Karen is quickly surrounded by a swarm of bloodsuckers on the street. Mickey only promises to protect her if she takes the pill, but when she refuses, he abandons her. As he leaves her to be consumed by the untalented rabble, this is supposed to be his final goodbye, so she takes the pill! Karen realizes her full potential by traveling to Los Angeles with Mickey and wreaking havoc on Hollywood. So we’re not surprised that Karen assassinated Mickey. Karen rips Mickey’s throat out on the beach, then slits her own wrists and walks into the water.