All American Homecoming Season 2 Episode 7: Simone meets her past 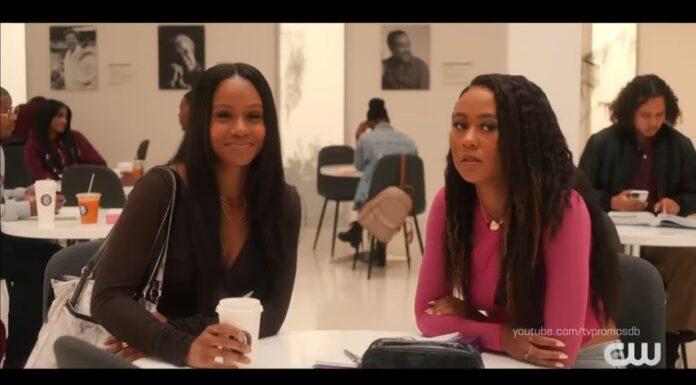 In the sixth episode of Season 2 of All American: Homecoming, Simone found herself in a difficult situation when she had the impression that the sisterhood was absent. She is showing more and more interest in joining a sorority, While this was going on, Marcus gave Damon and JR the responsibility of entertaining a prospective top baseball recruit. However, unanticipated friction between the two of them fouled everything up. Thea was compelled to make a decision regarding the path that would be most beneficial to her professional life because of her desire to return to the court. What will happen next? www.tvacute.com has brought more information about the All American Homecoming Season 2  Episode 7 for you which you can check below.

“Integrity,”  is the title of All American: Homecoming Season 2 Episode 7.  it is also possible that this will be the one that gives Simone the opportunity to try to go on a more positive path. She must balance the demands of her sports career with her personal obligations and generally has a lot going on in her life. but in tonight’s episode, a flashback from her past presents its own set of problems for her to contend with. We have high hopes that the resolution of this episode will pave the way for her to take steps on the right path, but who can say for sure what those steps will be? In the meantime, Marcus receives some disheartening information, and he seeks the support of Amara at this time. Let’s just say that this character is going through a lot right now  In the event that you require additional information regarding what is to come, the following is a synopsis of the seventh episode of the second season of All American: Homecoming.

BEING SUPPORTIVE – Simone (Geffri Maya) is trying to break her long-running tennis curse by acing her presentation and dealing with boy drama, but a blast from her past brings its own drama. Damon (Peyton Alex Smith) and Thea (Camille Hyde) are all set for a weekend away until the pressure of the high-stakes game and interview messes with their plans. Marcus (Cory Hardrict) learns some disappointing news and turns to Amara (Kelly Jenrette) for support. Meanwhile, Cam (Mitchell Edwards) plays matchmaker for JR (Sylvester Powell) and a visit from a dance alum raises the bar for Keisha (Netta Walker) and she’s not sure how to handle the pressure. Steve Acevedo directed the episode written by Hollie Overton (207)