Yellowstone Prequel Series 1883 Episode 10 – “This Is Not Your Heaven” | Season Finale Photos | Cast | Will Elsa Survive?? 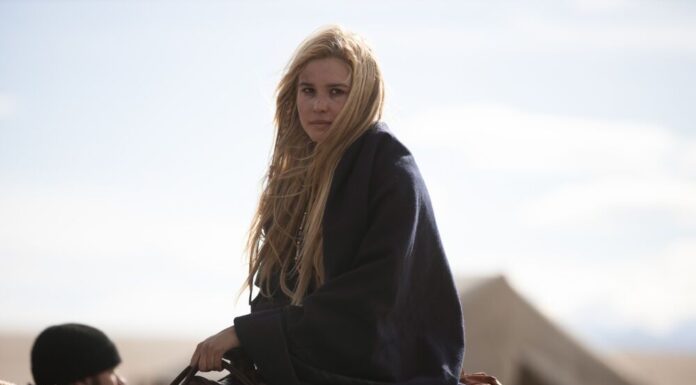 In the penultimate episode of Yellowstone spin-off, “1883,” A Native American group thinks the wagon campers are killers when they see them. They attack them. In addition, Josef and Risa get hurt and need to go to the hospital right away. on the other hand James, Shea, and Thomas want to punish the horse thieves and want to clear their names. After a fight with the tribe, Elsa calms down the situation. However, in the process, she gets hurt. While Margaret (Faith Hill) and the cowboys found a tranquil time to remove the arrow cauterize the wounds with a hot iron, Elsa’s damage appeared to be fatal.  But the caravan is still on its way. Read the 1883 episode 9 full recap here. we’re sure fans can’t wait to see what happens next in this Western epic. The events of this episode have made me more excited for the times to come.  Fans have eagerly anticipated the release of 1883 episode 10. As three lives in jeopardy? The fate of Elsa, Joseph, and Risa’s uncertain.  So, here’s all you need to know about the tenth episode. We’ll tell you what we know about Season 1 Episode 10 of the Yellowstone Prequel Series 1883 at www.tvacute.com.

1883 Finale Recap: Josef is still alive or is Risa survive

First and foremost, The new episode 10 of 1883’s season 1 is titled “This Is Not Your Heaven”. Keep in mind, The tenth episode will be the last one in the first season. There are a total of ten episodes in the first season. There’s a lot to see right now, and there’s a lot more on the way! Fans are eager to see how season 1 concludes, especially given the events of the most recent episode. Elsa’s wound has become infected. it appears that James has chosen not to get her treatment. In this case, we will have to wait and see if there is a miracle that can save her. We’ll see the caravan arrive at the next stop on their journey. A military camp is where the group is going to get Josef and Risa the help they need. However, their condition is getting worse and they’re wasting time-fighting with the Native Americans. It will be hard for the group to make the trip in time. Furthermore, the group’s size has shrunk, making them easy prey for bandits. The thrilling journey of the Duttons is now coming to an end in Oregon. It’s possible that their plan could change after the recent events. They could end up moving to Montana, where they will build the foundation of the Yellowstone Ranch.  Is there an ultimate destination in store, or is this a trip that continues?

James and Margaret face a heavy decision. Shea and Thomas take bold action to help one of their own.

1883 Episode 10 is coming at the end of Feb. New episodes of the show will be added to the streaming service every week. the final episode is 45-60 minutes long. “1883” finale Episode 10 is set to air on February 27, 2022, at 3 am ET on Paramount+. Ten episodes are expected to be in the first season of the prequel series.

Nothing has been confirmed by Paramount+ if we get 1883 Episode 11, it will premiere on March 6th.

1883 finale episode will be available exclusively through the new Paramount+ streaming service. Essential Plans ($4.99/month or $49.99/year) and an ad-free Premium Plan ($9.99/month or $99.99/year) are available from Paramount+. A CBS live stream is included in the Premium Plan, which is ad-free. Viewers in Canada, the United States, and Australia can subscribe to Paramount Plus, which includes a 30-day free trial.  also 1883 season 1 is available on amazon.

Which TV Providers Have Paramount Networks to Watch 1883 Episode 10?