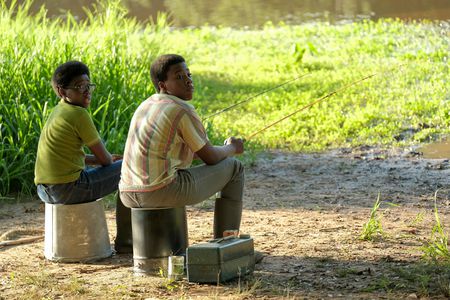 The Wonder Years revival, based on the much-loved 1988 original, has premiered on ABC. After receiving favorable reviews from critics, the pilot episode of The Wonder Years remakes was broadcast on September 22. While emerging out of the shadow of its cult-classic predecessor, episode 1, “Pilot,” tackles crucial racial and teenage challenges with heart and comedy.  Now fans are eagerly anticipating the new second episode of Season 1 of The Wonder Years Reboot. Allow www.tvacute.com to provide all of the information you’ll need to watch the new episode 2 titled “Green-Eyed Monster” of ‘The Wonder Years 2021.’.

The first season of The Wonder Years followed a 12-year-old boy named Fred Savage and his middle-class family in the 1960s. The reboot centers on a brand-new family, with Dean, a 12-year-old boy growing up in a middle-class family, as the key character. Rather of being located in an unknown suburb like the original series, The Wonder Years revival is set in Montgomery, Alabama, which serves as an appropriate background for the civil rights movement, the Vietnam War, Dr. Martin Luther King Jr.’s assassination, and more.

In the latest episode, “Green-Eyed Monster,” The Wonder Years continues its nostalgic walk down memory lane in the emotional aftermath of Martin Luther King Jr.’s death. After church, Dean (Elisha “EJ” Williams) watches as his big sister Kim (Laura Kariuki) tries to persuade their parents Lillian (Saycon Sengbloh) and Bill (Dulé Hill) to let her join a protest against MLK Jr.’s murder. Dean will still be shaken by the sight of Cory kissing Keisa. His family, on the other hand, believes he is depressed as a result of Dr. King’s death. They band together and strive tirelessly to assure Dean that he is not alone. He notices their misunderstanding, but it feels nice to have their attention, so he goes through with it and accepts Kim’s rally invitation and his father’s offer to take him fishing.

The Wonder Years New Episode 2 Synopsis: While Dean reckons with his first taste of heartbreak and betrayal, the adults in his life are overly empathetic and assume his grief is from mourning current events. Dean milks the special treatment and uses it to his advantage – and his family shows their support for him in their own unique ways; Kim invites him to join her at a local activist rally, while Bill and Dean bond during a fishing trip.

The Wonder Years Reboot Episode 2 will release on WEDNESDAY, SEPT. 29 at 8:00-8:30 p.m. EDT, on ABC. Episodes can also be viewed the next day on demand and on Hulu.

Dean, like The original 1988 series Kevin Arnold (Fred Savage), is an ordinary teen navigating adolescence. But being a Black kid in America towards the conclusion of the Civil Rights Movement has its challenges. On his way to work, he passes his old desegregation-era school. When he asks Coach Long (Allen Maldonado) to play baseball with his friend Brad (Julian Lerner), he is unaware of the possibly detrimental repercussions of playing against an all-white team. As always, the series mixes humor and complexity. Mrs. Hodges chastises Dean and his buddies for using a “yo mama” joke in class, telling them to be more like their white peers. He recalls the teacher as being racist, but also recalls her giving special attention to Black kids who she felt had ability.

It’s a hilarious show that portrays its young lead as a regular youngster with normal problems. One of his classmates teases him about his glasses, and he is ridiculed because he likes Keisa (Milan Ray). That baseball game even comes with his dad yelling contradicting directions from the sidelines. Despite its levity, the sitcom has its share of dark moments. The Williams’ tone changes when they learn of King’s death. We watch each family member’s agony and grief as they digest the great loss. While Dean recognizes the gravity of the situation, that day stands out because it was also the day his best friend Cory (Amari O’Neil) betrayed him by kissing his crush Keisa.