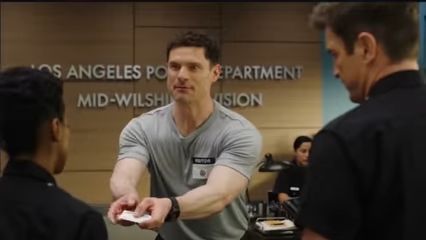 Thorsen’s love for Langston caused some heartbreak in The Rookie Season 4 Episode 13. Nolan and Chen spent the day going on a quest set up by a troubled teen. To discover more about the rookie episode 4.13, read the recap below.  What will happen next? (www.tvacute.com) Here’s all you need to know about the 14th episode of ‘The Rookie,’ including a sneak peek and a date for its release.

There aren’t any more episodes of the Nathan Fillion show yet. In the coming weeks, NBC will be airing highlights from the 2018 Winter Olympics, a competition that ABC is adamantly refusing to air. In addition, the impending Super Bowl will be another source of competitiveness. All of the above points out why The Rookie should be taken off the air until February 27. As a bonus, American Idol’s new season will air right after the Olympics.

What will happen in the next episode? Flula Borg aka The Javelin will appear in a new episode of The Rookie. You can watch the promo below.  It’s too early to speculate on the future of the Nathan Fillion series, but there will be at least a few more before the show ends. This could be seen as a good thing about the show’s current hiatus. It allows the show to make more episodes.

The Rookie Episode 414 Synopsis: Officers Nolan and Harper help Skip Tracer Randy on his first bounty hunter case. Meanwhile, Officer Chen and Sergeant Bradford are on the hunt for a perpetrator on a citywide crime spree.

The Rookie Season 4 Episode 14 will release on SUNDAY, February 27 at 10 pm ET, on ABC. Episodes can also be viewed the next day on demand and on Hulu. Hard die fans of ‘The Rookie’ can stream the entire season 3:   DirecTV | Sling TV | Fubo TV | YouTube TV | Hulu

The Rookie episode begins with Nolan arriving at the station and learning that a police helicopter has been stolen. It is a teenager named Leo who Nolan met in the elevator and claimed to be Steve Miller’s son. Grey and Nolan make an attempt to calm him down. They need to get him off the plane before it runs out of gasoline. He wishes to take part in a hero’s trip. Angela and Tim work on a case together. As part of his reality show, Thorsen has a new assistant. When Harper isn’t feeling well, she visits her OB. Thorsen has to relieve a sheriff who is watching over a lifer prisoner who killed an officer while he is in the hospital.

Nolan is given three objectives to perform in order to finish his hero’s journey. Nolan and Lucy are given quests by Leo, and Lucy advises Nolan to accept them. Leo takes them to a trap house where teenagers used to congregate until it was taken over by bad individuals and dealers, and one of his friends died from an overdose. Thorsen feels the person he’s guarding isn’t guilty. Harper gives the assistant the food she requested, and she now asks him to locate a toy from her childhood. The alligator with whom they discovered the cocaine is also linked to Leo’s stepfather. Leo is concerned about his mother, who has a history of substance misuse and has relapsed since his father’s death. Leo wants to get his mother away from his stepfather, who he believes is causing her to relapse.

Thorsen brings Wesley and James in and they say Langston has a case, but later Harper informs Thorsen that there is a video of Langston stomping a guard during a riot, therefore his request for a retrial is futile. They are successful in apprehending Leo’s stepfather, but just as he is about to land, he is informed that he is out of gas. They land the aircraft and take Leo into custody. Nolan apprehends him and gives him his business card as well as some advice. Thorsten isn’t giving up on Bryant; he believes he is innocent and that a cop killer is still on the loose. Wesley believes he will regain his licence and plans to undertake more pro-bono work. Grey rushes in as the squad is about to leave the station for drinks and says there has been an incident at Animal Control with Cupcake, the alligator they obtained from the fentanyl house, and he needs them all.