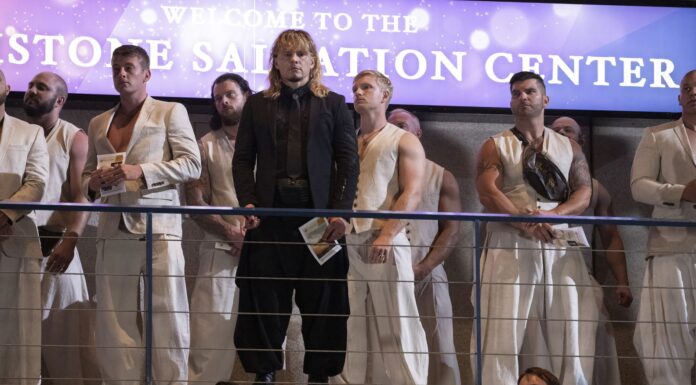 The Righteous Gemstones, directed by Danny McBride and starring McBride, John Goodman, Adam DeVine, Edi Patterson, and others, follows a pious family aiming to grow their megachurch network. In episode 6 of The Righteous Gemstones’ current season, Eli is attacked by a bunch of motorcyclists who shoot him many times. Jesse and Amber were attacked by the same group before this unexpected event, but neither of them was hurt. Episode 6 also follows Jesse as he sets out to threaten Junior, whom Jesse believes engineered the attack, and explores his humiliation for not shooting any bullets on aim, unlike his wife. Read the recap below. What will happen next? www.tvacute.com has brought more information about The Righteous Gemstones Season 2 Episode 7 for you which you can watch below.

“And Infants Shall Rule Over Them” is the title of the episode. In the absence of Eli, Jesse, Judy, and Kelvin will battle it out for control in this episode. They will, however, eventually join forces to strengthen the family and discover who was responsible for their father’s death.

With Eli temporarily out of the picture, the Gemstone siblings are left to quarrel over who’s in charge, until some wise words help pave a way forward; as Tiffany tracks down Baby Billy, Gideon faces his future.

The episode started with thugs firing shots at Jesse and Amber’s RV, but they were unharmed. While they were leaving, Jesse walked out with a gun and attempted to shoot them, but not a single shot injured anyone. Amber, on the other hand, managed to collide with one of the bikes. The Gemstones called cops at home the next day to address the situation. While Jesse chose to ignore Eli’s advice to keep out of this situation. Kelvin was worried that his empire was unraveling as the guys took over his mansion and everything else he had. As a result, Keefe advised him to appear strong and demonstrate that he was still the leader. Meanwhile, Jesse collected the guys in order to address the issue at hand, which was to determine who had struck him and his wife. This was also owing to the fact that the women were all congratulating Amber for striking one of the bikes while Jesse completely missed it. BJ, on the other hand, told Eli about Judy’s personal problems and how she might come down as a result of her suppressed feelings.

Surprisingly, Eli was moved by BJ’s words and shook his hand, making BJ feel great about himself. Meanwhile, Kelvin’s situation was not looking good as Torsten confronted him because he wanted to be the new leader because he was the strongest. Kelvin demanded that if he intended to overcome him, he wear the cross. Torsten won a challenge and snatched Kelvin’s master bedroom after becoming a leader, but things didn’t go well for Kelvin. Kelvin, on the other hand, was wiping the floor inside his own house. Eli later approached Kelvin to apologize for breaking his fingers, but Kelvin begged him to leave because he didn’t want to see his face. Meanwhile, Jesse as well as the other guys went to see Junior and warned him of dire consequences if he went after The Gemstones. In the end, though, the same biker group surrounded Eli on the road as he was driving and killed him horribly.