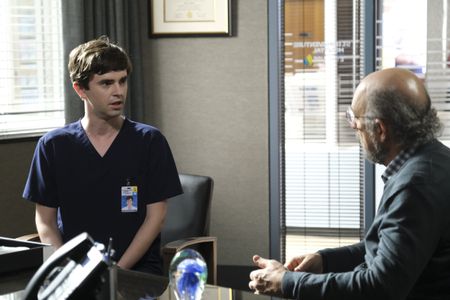 In the midseason finale of The Good Doctor Season 5, his intended wedding to Lea Dilallo (Paige Spara) was thrown into disarray when she was caught fiddling with Shaun’s hospital records. Dr. Murphy (Freddie Highmore) broke down in St. Bonaventure and informed his fiancée that he could no longer marry her after Ethicure’s penny cutting resulted in the unnecessary death of a premature infant. The series was put on hiatus following the unexpected twist at the end of season five’s seventh episode, with little to no indication of when the St Bonaventure team would return.

After this fans are eagerly waiting for The Good Doctor Season 5 Episode 8. When will The Good Doctor season 5 episode 8 air? And what do you expect in episode 8? tvacute.com has all the answers. So, here’s what you need to know about the eighth episode of the much-awaited series. Apart from this, new episodes photoset has been released by ABC.

But The latest season of the Good Doctor has finally given some good news for ABC viewers. Now we won’t have to wait much longer, as ABC has announced that episode eight will air by the end of the month. Following ABC’s cancellation of failing freshman drama Promised Land after five episodes. we learned that the Freddie Highmore medical drama will return on Monday, Feb. 28.

Time to scrub in! #TheGoodDoctor returns TONIGHT at 10/9c on ABC and Stream on Hulu. pic.twitter.com/nNpiTYTjfa

In the long-awaited episode eight, The Good Doctor Season 5 titled “Rebellion”. As the title suggests, Dr. Audrey Lim will expose Salen for the death of a newborn before it’s too late.  Shaun and Lea’s relationship  Speaking of Shaun and Lea, We will see Shaun has decided not to marry, he is forced to confront Lea about their relationship and find out what he really means to her in her eyes. Meanwhile, the team debates their views on plastic surgery. It remains to be seen in upcoming episodes the future of Shaun and Lea’s relationship, the decline of Glassman’s role as Shaun’s mentor and president following the acquisition of Ethicure Medical; and the fate of St. Bonaventure at the hands of the insignificant Salen Morrison. What do you think of Dr. Marcus Andrews and Salen? Will be dating.

Shaun and Lea’s showdown has been teased in a new trailer for the next episode. Immediately following Shaun’s breakdown in which he informed Lea that he could no longer marry her, the trailer begins. Lea’s said,  “We love each other. We can figure out a way to work this out.” At the hospital, Dr. Glassman (Richard Schiff) tells Shaun, “She made a mistake. Give her a break!” St Bonaventure’s new owner Salen Morrison (Rachel Bay Jones) is still the target of Dr. Audrey Lim’s wrath following a tragic stillbirth in the previous episode. Watch the promo and synopsis below.

The Good Doctor Season 5 Episode 8 Synopsis: Now that Shaun has called off the wedding, he is forced to confront Lea about their relationship and determine what he really means to her. Meanwhile, the team debates their opinions on plastic surgery and Dr. Audrey Lim hopes to expose Salen’s cover-up over an infant’s death to take her down before it is too late.

The Good Doctor Season 5 Episode 8 will release on Monday, Feb 28 2022 at 10/9c, on ABC. Hulu has previous Seasons accessible to view. The show is available to stream on Hulu and ABC’s official websites. The show is also accessible on a variety of streaming TV services. For those residing outside of the United States, The Good Doctor is available on Netflix. Hulu with Live TV and YouTube TV are two platforms that allow consumers to stream live television. Seasons 1to 4 are also available for purchase on Amazon Prime Video, either by the episode or by the season.