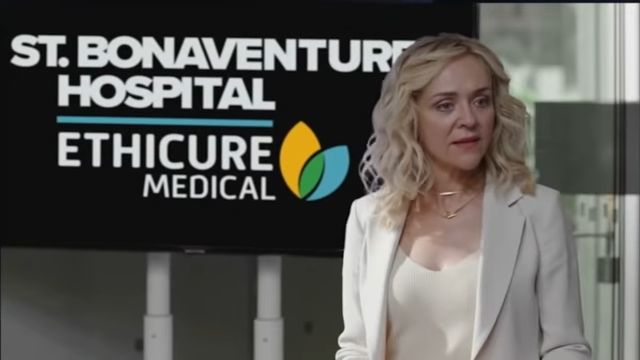 Lea had a nightmare in the Season 5 premiere of The Good Doctor! Her outdoor wedding, she imagined, would be a disaster. The good news is that Dr. Shaun Murphy (Freddie Highmore) and Lea Dilallo (Paige Spara) are marrying (hopefully not in the way she imagines). But wait, there’s more: the hospital is about to undergo a major transformation. In the closing scene, Glassman informs Lim that Salen Morrison (Rachel Bay Jones) is buying the hospital. Salen informs them, “I’m looking forward to working with both of you.” Do you want to know what’s in store for season 5 episode 2 of The Good Doctor? The title of this episode is “Piece of Cake,” which seems pleasant and reassuring on the surface. but keep in mind, there are a few more surprises in store that you won’t expect. Here’s (www.tvacute.com) everything you need to know about The Good Doctor Season 5 Episode 2, including the synopsis, and exclusive Promo.

We’ve seen in the teasers for episode 2 that Salen Morrison is changing the way the hospital operates, prioritizing customer feedback over patient care and making life significantly more difficult for the doctors. How adaptable will she be, and how likely is it that she’ll end up reorganizing the team? With so much change happening at once, Dr. Wolke is dubious of what Salen and Ethicure Medical are trying to accomplish. As Drs. Jordan Allen (Bria Samoné Henderson) and Asher Wolke (Noah Galvin) worked on Salen, viewers saw a new, competitive aspect to their working relationship, with Jordan determined to outsmart Asher and take charge of all procedures. it seems that there will always be a level of competition between the two of them.

The Good Doctor Episode 501 Synopsis: Dr. Shaun Murphy and the team race to save a pregnant woman’s baby and find her current situation as a convicted felon complicates it even more than they realize. Meanwhile, the hospital takes on some unexpected changes that the staff is not prepared for. Guest-starring is Rachel Bay Jones as Salen Morrison, Lyndon Smith as Abby Clemmis, Blessing Adedijo as Madeline Cross, Constance Ejuma as Esther, and Elfina Luk as Nurse Villanueva. “Piece of Cake” was written by Tracy Taylor and David Hoselton, and directed by Tim Southam.

Millions of people have tuned in to watch the medical drama. Thousands of fans have favorite characters, but Dr. Neil Melendez is still missed by many according to cheatsheet. Also, BuzzFeed polled their community to see which TV characters they thought should have lived.

The Good Doctor Season 5 Episode 2 will release on ABC on Monday, October 4 at 10 p.m. ET. Hulu has previous Seasons accessible to view. Seasons 1to 4 are also available for purchase on Amazon Prime Video, either by the episode or by the season.

Lea had a nightmare in Season 5 Episode 1 of The Good Doctor! Her outdoor wedding, she imagined, would be a disaster. It began to pour heavily almost immediately. Then a nearby tree was struck by lightning and fell on her… She went straight to Shaun and informed him that they would not be having an outdoor wedding. She even postponed the engagement party..

Salin Morrison, a strange woman, arrived in the hospital. Her condition necessitated a biopsy. She was perceptive, assertive, and inquisitive. Dr. Allen was ecstatic to biopsy the woman, but she went off all around the hospital. Even Dr. Glassman in his office and Lea in the server room were taken aback. It took a long time to persuade her to comply, but she eventually did. Mateo showed up at Lim’s house and startled her. The charges against him were later withdrawn! However, he had difficulty finding work.

Shaun and Lim have been assigned a difficult case. Cancer was passed on to a boy from his mother. Surprisingly, the boy contracted cervical cancer in his throat while in his mother’s wound. The team needed to check on the mother’s health, and they discovered that her cancer had progressed to a dangerous level, requiring emergency treatment. She needed a radical hysterectomy, chemo, and other treatments, and her recovery would take a month. Because the mother’s procedure was more serious, the team wanted to get it done as soon as possible. The youngster had a tumor in his throat, and he could take weeks to heal. Mom couldn’t afford the time off, so she asked that they just treat her son and that she would return when he was finished.

Uncle Nick, the boy’s uncle, arrived at the hospital unexpectedly. He was instantly ejected by his mother. He was an alcoholic, so there was a lot of tension. She’d lost faith in him. Shaun had a picture of how he could operate on the boy securely. Lim had to abort the procedure when they attempted it owing to a fresh discovery. Dr. Park sat there scratching his brain, trying to figure out how to operate on the youngster. He had an epiphany and decided to contact the woman’s brother. Nick went to consult with his sister, who agreed to let them operate on her. Mateo noticed Lim was preoccupied. She explained her situation to him, and he gave her a critical strategy to try. She applied the strategy in the operating room, and it worked! Both the mother and the son were saved by the crew. Nick, who made it feasible for Park and Shaun to operate, was thanked.

Lea admitted to Dr. Allen that her first marriage was a disaster… and so was her marriage. She was counting on the start of the wedding to go smoothly. Allen reassured her that everything would be OK and that the party could resume. She then dragged Shaun out of a cancer case meeting. Shaun, on the other hand, opted to take care of the matter first, then go to the party. Andrews, who is also newly single, ended up with two dates for Shaun and Lea’s celebration by chance. He took the bartender home with him. By the end of the hour, when Andrews asked the bartender if she wanted breakfast and she said no, it was evident that he wasn’t cut out for bachelorhood. He is looking for a long-term connection. Park and Morgan, meanwhile, exchanged a kiss before Shaun and Lea’s celebration, indicating that their relationship is still going strong.  Because he had lost his wife, Dr. Glassman gave an emotional statement during the gathering. Debbie left him at the party a few months earlier during his toast to Shaun and Lea.

Meanwhile, Park saved the life of the true Patient of the Week: a single mother who had severe cervical cancer and had passed it down to her two boys. Park persuades Shaun to leave a medical mystery at home overnight so that they can get to the party sooner rather than later. Shaun showed up for his engagement party just when we feared he wouldn’t. For once, he put his future ahead of a case. Shaun tells Lea at the end of the episode that he’ll help her organize the wedding, so it’ll be on both of them if things go wrong.

What was wrong with Salin was discovered by Dr. Andrews, Allen, and Wolke. She did, however, require a kidney biopsy. She had a medical problem that she was aware of but kept hidden from the doctors. She barged into the operating room and inquired about the procedure. Lim agreed with the assessment, despite the fact that she was unfamiliar with her case. Glassman later spoke with Lim about the hospital being bought. Salen Morrison was the one who brought it…