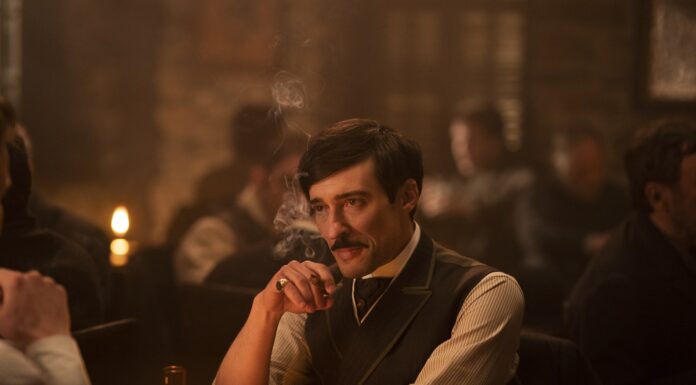 Ward McAllister (played by Nathan Lane) and Clara Barton (played by Linda Emonds) are both genuine people that appear in the imagined Gilded Age universe.
They have a firm grasp of the stakes and role. Bertha’s efforts end in assisting Marian and Peggy in achieving their goals. While Ward McAllister was recognized for his role as a lieutenant for Mrs. Astor in shaping and curating high society at the time. Read the recap below.  Now fans are eagerly waiting for the next episode of The Gilded Age season 1.  To know more about the new episode 6 of The Gilded Age take a look at its promo and Synopsis below on tvacute.com.

Must Read: Who is Clara Barton?

“Heads Have Rolled For Less” is the title of the upcoming episode. George has a major issue in the next episode. as he invested in the training industry, but a large, fatal catastrophe might put everything in jeopardy. we’ve enjoyed Peggy’s journey thus far. she is already having some success. But it won’t happen every time.

The Gilded Age Season 1 Episode 6 on HBO on February 28, 2022, at 9/8c. You may see the first episode on HBO Max if you missed it. The sixth episode will air on Sky Atlantic in the United Kingdom on Tuesday, March 1. You’ll be able to catch up on NOW as well. Direct tv

Adelheid, one of the maids, assists Gladys in escaping the Russell home. Marian asks Aunt Agnes whether she can go to a Red Cross function in Dansville with Aurora Fane. Aunt Agnes explains that charity has two purposes: it helps the less fortunate and it allows less-than-deserving individuals into society. Marian is allowed to travel as long as Peggy joins her, as Aunt Agnes no longer has entire faith in Mrs. Fane. Clara Barton has no idea why Bertha Russell is interested in the Red Cross and comes to visit her in Dansville, New York, where she established the organization’s first branch in 1881. She’s also aware of what Aurora stands to gain by introducing Bertha to her. She accepts the transactional components of these transactions because they benefit the people she is attempting to assist.

Gladys continues to defy her mother’s restrictions at the Russell household. George (Morgan Spector) advises his wife that having such a rigid approach toward their daughter could be harmful to her safety, but he mostly stays out of it. Mrs. Bruce persuades Bertha to give Gladys her own lady maid, and Adelheid, a young lady maid, is elevated to the job. Meanwhile, Oscar (Blake Ritson) and Ms. Turner (Kelley Curran) get to know each other and decide to team together to achieve their goals. At Aurora Fane’s residence, Bertha eventually meets Ward McAllister. Marian and Raikes are also present to contribute to the discourse. Bertha and McAllister are clearly cut from the same fabric, as everyone in the room quickly notices. They’re both driven, cutthroat in their own ways, and pragmatic when it comes to money. Marian and Peggy reunite, but Peggy sets some ground rules. Peggy’s mother visits the Brooks and asks Marian to persuade Peggy to return to Brooklyn. Agnes sends Peggy with Marian to meet Barton in Dansville. They join Bertha, Aurora, and Raikes. Barton joyfully interviews Peggy in Dansville.

Peggy interrupts Marian and Raikes’ kiss later in the evening. Mr. Raikes knows more about Peggy’s life than Marian. The tension is eased when Peggy says she knows Marian is a good person. Richard Clay, George’s secretary, receives an emergency message from Millbourne, Pennsylvania, while the Russell family is welcoming Archie Baldwin. He arrives as Baldwin departs. A train has derailed off George’s company’s lines. Initial reports indicate three deaths and several significant injuries. But they can’t be sure because the unsubstantiated news implies all three were men. George instructs his wife to call Barton and tell him about the alleged accident. They decide to keep their news out of the papers for now. George and the others realized that an accident was inevitable due to the nature of the train business. Now George must control the narrative and deal with the events before they destroy him. Archie seems like a nice fit for Gladys. He comes from a wealthy family and seems to have a promising career as an investment banker. More importantly, he and Gladys appear to be a match. But Bertha wants more for her daughter and persuades her husband to stop Gladys and Archie from seeing each other. After dinner, George makes an offer to Archie. If he agrees to stop communicating with Gladys, he will become a Seligman broker.