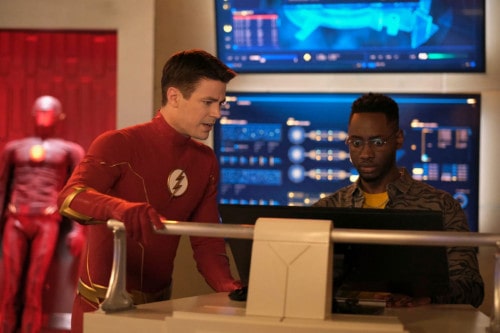 CW’s The Flash season 2 is set for episode 15, which is going to air the last week of June Month. A lot is going to happen in this episode (titled: “Enemy At the Gates” ), which will make us more interesting in the show. The Flash team needs to be on alert, as Godspeed is back in Central City. Now they have to keep their family issues aside. With this, Chillblaine (guest star John Cor) has also been released from jail. let’s get to know this episode 15 a little more closely, You can also check out the fresh photos with tv acute and synopsis given below. Plus Promo (Updated)

CHILLBLAINE IS RELEASED FROM PRISON – When an army of Godspeeds attack Central City, Barry (Grant Gustin) and Iris (Candice Patton) must put their family plans on hold and focus on the latest threat to their home. Meanwhile, Chillblaine (guest star John Cor) is released from prison and claims to be reformed but Frost (Danielle Panabaker) has her doubts.

Geoff Shotz directed the episode with a story by Jason V. Gilbert and a teleplay by Thomas Pound.

n \ y. We will update immediately when the network releases the trailer after episode 14 airs.