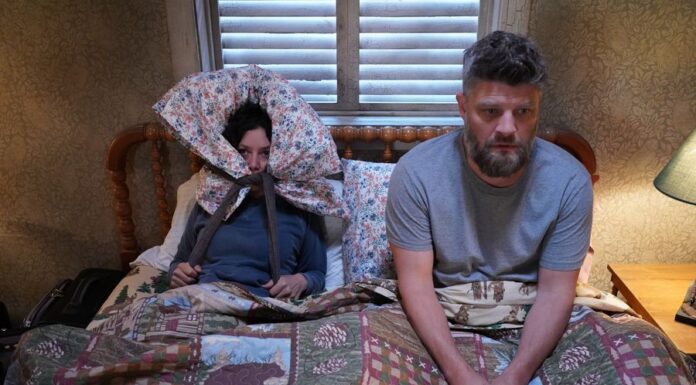 The ConnersSeason 5 Episode 1 will air on September 21. The Connors kicks out its new season with newlyweds Darlene (played by Sara Gilbert) and Ben (played by Jay R. Ferguson) Jackie (played by Laurie Metcalf) and Neville (Nat Faxon) going on a shared honeymoon.   Fans are now keen to learn more about The Conners’ new episode details. You can see www.tvacute.com’s synopsis, and promo for The Conners Season 5 Show 1 below, which will help you better understand the episode.

The Conners Season 4 Episode 20 Recap: [Season finale] Two out of three Couples Walk Down the Aisle! but who

Tonight’s episode is called “Double Honeymoon and Seeing Double”  After the happy marriages of Darlene and Ben and Aunt Jackie and Neville who went on their honeymoon together on Lake Michigan to save money a few months later, everyone is shaken by a flashback. Everyone is going to go to a significant discovery regarding the family’s history. Neville and Louise Goldufski (Katey Sagal) have arguments with one another, similar to the Conner squabble, which inevitably leads to Louise’s wedding to patriarch Dan (John Goodman). Watch The Conners Season 5 Episode 1 Sneak Peek below.

Share the love and don't miss the season premiere of #TheConners TONIGHT at 8/7c on ABC and Stream on Hulu! pic.twitter.com/6SGqRQIvo8

The Conners Episode 5.01 Synopsis:  –  In an effort to save money, newlyweds Darlene and Ben, and Jackie and Neville head off on their joint honeymoon, where their cost-saving measures contribute to a tension-filled getaway. Elsewhere, Dan, Becky, Harris, Mark and Beverly Rose head off for a night at a waterpark, where Harris and Mark bond in an unexpected way as Mark copes with the news that his ex-boyfriend is dating someone else.

How will Michael Fishman’s character as DJ Conner be scripted out of the show, though?

Michael Fishman leaves the show before Season 5, How will his character DJ Conner be scripted out of the show, though? EP Bruce Helford reportedly described how the programme will manage the character’s absence to TV Line. Helford indicated that DJ will be hundreds of kilometres away from Lanford prior to the September 21 launch. When The Conners debuted in 2018, Maya Lynne Robinson played DJ’s wife Geena. However, as fans will know, she left after Season 1 because the character reenlisted in the Army. Robinson left the programme to take a part in The Unicorn on CBS. The Conners’ Geena did make an appearance in Season 3, but she did not return for Season 4. Off-screen, she and DJ will now be reunited. But don’t worry about their on-screen daughter Mary, since the comedy on ABC will still feature star Jayden Rey.

The Conners Season 5 Episode 1 will be released on ABC on Wednesday, September 21, 2022, airing at 8/7c. in the network’s Wednesday time slot. The season will begin with a live episode, with the subsequent episodes being taped again. The most recent episodes of The Conners will be accessible the next day on ABC.com or Hulu. live TV streaming services such as Fubo TV, Hulu with Live TV, and YouTube TV. ‘The Conners’ is available on iTunes, Amazon Prime Video, Google Play, or Vudu.