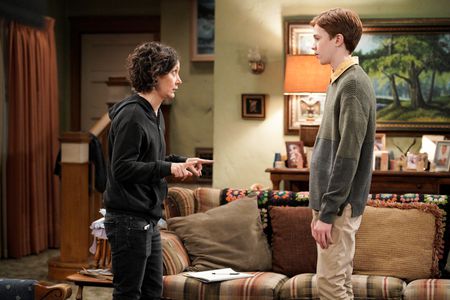 On The Conners Season 4 Episode 11, Darlene got in the way of Ben having a date, which led to a big fight. While Harris assures that her relationship with Aldo will work out, Jesse, Aldo’s father, is living proof. Becky wondered if her new job was the right move for her career. Continue reading about episode 11 by scrolling down the page. Fans are now keen to learn more about The Conners’ new episode details. You can see www.tvacute.com’s synopsis, and promo for The Conners Season 4 Show 12 below, which will help you better understand the episode.

In season 4, Darlene’s son, Mark, had a very dramatic storyline.  He hasn’t had an easy time in The Conners season 4 so far. In episode 10, the show revealed that he was having a hard time because he was taking ADHD medication that he got from his love interest Logan. However, Mark (Ames McNamara) didn’t show up in episode 11. But in the next episode of The Conners, “Hot for Teacher and Writing a Wrong,” will be on tonight. Mark has returned to public school and is struggling to fit in; when Darlene discovers what Mark is doing to get a little extra money for college, she is not pleased with the situation. There will be a long wait for fans who want more information about Mark’s story from season 4 or Ben and Darlene’s relationship problems after that. Due to the Winter Olympics, there will be no new episodes of The Conners season 4 until February 23rd.

The Conners Episode 4.12 Synopsis:  – Mark’s returned to public school and finding it hard to fit in; and when Darlene finds out what Mark’s doing to make a little extra cash for college, she’s anything but happy about it. Meanwhile, Becky finds herself in an interesting situation with one of her college professors.

Reasons Dan is the best grandpa:
Always imparting wisdom ✅
Plays dress up ✅
Encourages (questionable) extracurricular activities ✅
See you tomorrow for an all new episode of #TheConners at 9/8c on ABC! pic.twitter.com/vX3wGimdd5

Roseanne Barr, a former star of the show, tweeted a lot of racist things in 2018. The actor was fired from the show. When the show Roseanne came back, it was changed into The Conners. The new show killed off Barr’s character and focused on the rest of her fictional family. And the show kept getting good ratings even when Barr wasn’t there. Even though The Conners reached its fourth season, some flaws in the formula began to show. Dan and Louise’s wedding didn’t mention Dan’s ex-wife, which is weird. When The Conners season 4 returned to its original tone, many Roseanne fans were happy.

The Conners Season 4 Episode 12 will release to ABC on Feb. 2, 2022, airing at 9 p.m. in the network’s Wednesday time slot. The season will begin with a live episode, with the subsequent episodes being taped again. The most recent episodes of The Conners will be accessible the next day on ABC.com or Hulu. live TV streaming services such as Fubo TV, Hulu with Live TV, and YouTube TV. ‘The Conners’ is available on iTunes, Amazon Prime Video, Google Play, or Vudu.

Despite Jackie’s assertions in episode 11, Ben’s feelings for his old love interest Darlene have shifted. he may still desire to get back together. Ben appears to be interested in Darlene only when she is dating someone else or has stated that she is over him, although he may still want her back.  While Harris assures that her relationship with Aldo will work out, Jesse, Aldo’s father, is living proof. guest star Joe Walsh to have a worthwhile viewpoint on his son’s relationship with Harris. yet Aldo’s father managed to sum up their major problem in one discussion. Harris’s relationship with Aldo isn’t the most difficult in The Conners’ history, but it is a mismatched combination. Her lover Aldo is twice her age has three children, and has little interest in self-improvement, whereas Harris is a rebellious but ambitious nineteen-year-old. Aldo’s father, played by Joe Walsh, made his debut appearance on The Conners to both advocates against them staying together and to establish that they were a horrible match.

When Aldo’s father Jesse (Eagles guitarist Joe Walsh) met with Harris’ grandfather Dan, his behavior and arguments quickly convinced John Goodman’s character that the two were a bad match. Jesse’s argument was not that Aldo is older, but rather that he is constrained in his drive and maturity. When Jesse went on to explain how he too pushed his wife to psychosis, it just served to emphasize the reality that Aldo and his father are locked in a cycle of poor parenting. Jesse’s point about Aldo’s proclivity for shirking responsibility and making terrible decisions was mirrored in Jesse’s own bad life choices. Dan had little reason to hope Harris and Aldo could break the cycle, especially since Harris’s emphasis on making her and Aldo’s relationship work was motivated more by rage at him and Jesse than anything else. Jesse’s life (or at least what viewers saw of it) was a grim warning for Harris, alerting her that she would soon face the same fate as Jesse and Aldo’s wives