The Bold Type Season 5 Episode 3: Preview & Photos of “Rolling Into The Future” 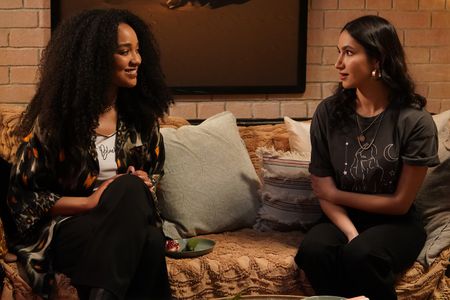 The Bold Type Season 5 Episode 3 which is set to come out this week, let’s have a look at what the story will take. After all, the series is nearing its end, with four more episodes left. And much more remains to be done. As in, is there hope for both Sutton (Meghan Fahy) and Richard (Sam Page) in the future? We know “they both really love each other and want to be with each other. But don’t agree on some things Richard wants kids, but Sutton doesn’t.” Kat (Aisha Dee) turns to Adena to help her friend. Could this be a sign of their ex’s reunion? And Adena has some secrets. And Who is Kat going to meet, which will change her life? The Bold Type final Season 5 episode 3 titled “Rolling Into The Future”,  Let’s take a look at its Synopsis and promo for more details. Also Episode 502 Recap

The Bold Type Episode 503 Synopsis:  Jane faces unexpected performance reviews that shake her confidence in The Failing Feminist. Sutton’s attempts to move on from her divorce are thwarted by other’s opinions, and Kat reunites with Adena, who has a secret.

“The Bold Type” Season 5 Episode 3 will release on Wednesday, June 9 at 10 pm, on the freeform channel. If you do not have cable, you will get it easily on live TV streaming like YouTube TV or Hulu.

The previsious episode 2 of The Bold Type final Season 5 has been tough for everyone. Especially for Sutton (Meghan Fahy), when she learns that estranged husband Richard (Sam Page) is in town. Kat tries to help Addison (Aisha Dee), an old classmate who is an ex-convict who is having trouble finding a job. And she runs into his ex-girlfriend, Adena (Nicohl Busheri). Jane confronts the truth of the story of false harassment by the source in her workplace, which is still under investigation. Scarlett bids farewell to writer Alex (Matt Ward), a very sad and emotional moment for everyone. Although he is not going very far. He gets a job at a pinstripe a few floors down.