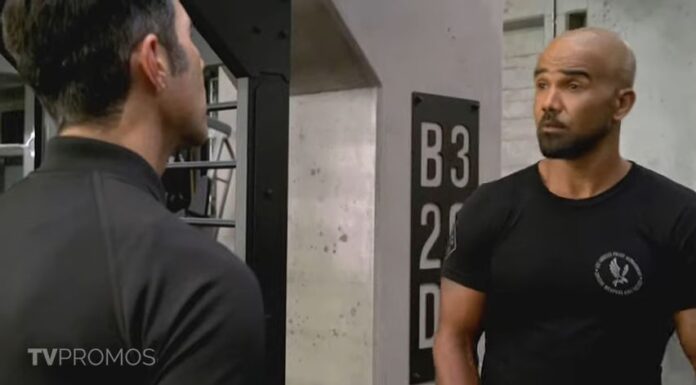 A strange case arose in the previous episode of SWAT Season 5. A gunman stormed into a stranger’s home. Hondo went against Sanchez in the field and so that was strike two. Another strike and he will have to face a disciplinary hearing. But the team was behind him. They fully supported him.  Are you interested in finding out more about SWAT season 5 episode 6? All of the information, including the promo and release date, can be found at (www.tvacute.com).

SWAT season 5 episode 6 may be one of the most interesting stories yet. The attention will be on a controversial cable news show that promotes conspiracy theories because it will be targeted by armed attackers! This bizarre development will force the SWAT team to act quickly to stop the attack from escalating on LIVE TV. We’ve wanted to see Chris and Street together for a long time. This isn’t the time to further a romantic process, but rather to exhibit the two parties’ deep emotional bond. Jim Street is prepared for an extremely emotional event: his mother’s funeral. Chris will show up to help Street. which is exactly what we want to see.

SWAT Episode 506 Synopsis: When armed gunmen storm the set of a controversial cable news show that promotes conspiracy theories, the team races to prevent a hostage situation from escalating on live TV. Also, Chris supports Street as he prepares for his mother’s funeral.

‘S.W.A.T.’ Season 5 Episode 6 will release on Friday, November 12th, 2021, at 8 p.m. ET on CBS. If you missed the show on cable, it’s still available on CBS’ official website and Paramount+. YouTube TV, Fubo TV, DirecTV, Xfinity, and Hulu+Live TV are all possibilities for cord-cutters. Vudu, Amazon Prime, Google Play, Microsoft Store, and iTunes may also have the episode on demand. Subscribers to Hulu can also watch the first three seasons here.

A strange case arose. A gunman stormed into a stranger’s home. When he started firing, someone inside contacted 911. SWAT was promptly dispatched. The phone call was a ruse. It was a ruse on a prominent black couple. The intent was clear. The objective was to kill this former pro football player. After Hicks informed his superiors, the police commissioner agreed. Someone was after Derrick Nichols. He said he got a lot of hate mail because of his plays. now the only hate mail he gets is from his former neighborhood.

Nichols’ wife sent them letters from the past. They reached out to a few people, one of whom referred them to a Nichols-hating forum online. The team received a message from someone using the same method to disguise his voice as the earlier threatening call. The “swatter” of Nichols swore he wouldn’t stop. He wouldn’t stop until Nichols died. The team took the threat seriously and requested more information about Nichols. Luca and Tan questioned weird large person later. He played football. He knew Nichols. He just found out Nichols was sleeping with his wife. Nichols didn’t reveal his affair. Then Hondo asked the same question in front of his wife, so Nichols lied.

Nichols changed when he played football. He became used to the groupies and took advantage of them, but now he understands he just wants his wife, so he ignored her messages when he cheated on her. He dreaded what she may say. Hondo reassured him that a genuine apology could salvage their marriage. Nichols walked to a corner to hear the message and then vanished. He departed. When his manager couldn’t reach him, he accessed Nichols’ voicemail.

Carolyn Nichols had been abducted. But Hondo and his team tracked down the assassins. They learned that Nichols recently backed out of a contract worth $60 million to a man named Sam Greer. He wasn’t abducted. Carolyn and Greer were working together to kill Nichols because they needed his big money. Divorce would likely net Carolyn half of her ex-assets. husband’s The greedy trick wanted all his assets and to divorce him. She had an affair with Greer.

the cops arrived. They killed Greer. They saved Nichols’s life. Nichols will be getting a divorce now but at least he’s alive. Hondo went against Sanchez in the field and so that was strike two. Another strike and he will have to face a disciplinary hearing. But the team was behind him. They fully supported him and, while Deac took time to close a cold case for Hicks, he still came back to be there for Hondo when he was needed.