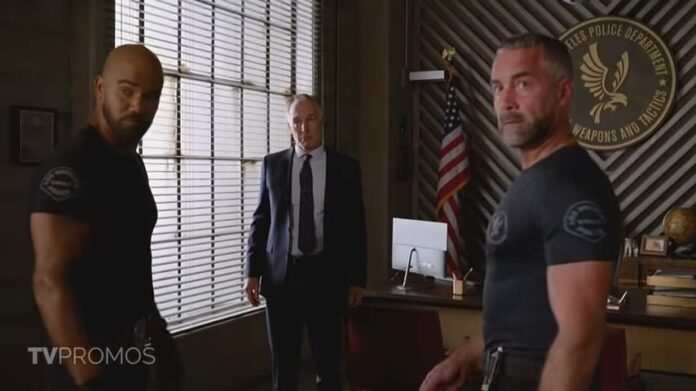 Episode 2 begins where the SWAT Season 5 premiere left off, in Mexico, Delfina is kidnapped by Novak, but eventually rescues Delfina from Novak’s snuggle with the help of Charro. On the other hand back in LA, Hicks seeks final approval for the team’s work. Good news! Hondo is back. Saying it’s time to get back to work, the group hugs, he asks how his team is like Street and Chris Exchanges. Now, Are you excited to see the new episode 3? We’ll have to wait a few days to view it. Until then, go to www.tvacute.com to see photos and a synopsis of Swat Episode 503.

SWAT season 5 episode 3 titled “27 David” will, however, feel more familiar than previous episodes. The first two parts focused on Hondo’s adventures in Mexico. Meanwhile, we’re coming closer to returning to Los Angeles – there are some intriguing difficulties in store for SWAT, as well as a new character towards the end. New Team Leader Rodrigo Sanchez is going to have his own personality, and we believe that there will be some conflict as a result of that. will he harbor grudges towards some of the team’s current members? Will he change police policy?

In the forthcoming episode 3, Animal Kingdom’s David DeSantos will make an

appearance. Rodrigo Sanchez, described as a “20-year LAPD veteran and former SWAT member,” plays him. Sanchez is a gregarious, self-assured, and astute political climber who left SWAT in search of higher-ranking positions within the LAPD.” Sanchez has a history of working with SWAT and the LAPD based on that description alone. The question that always arises as a result of this is what that history is.

SWAT Episode 503 Synopsis: When a robbery crew holds up the iconic downtown Los Angeles library, the team discovers that stolen architectural drawings could lead to a major threat against the city. Also, the squad is surprised by the arrival of a new leader, longtime LAPD veteran and former S.W.A.T. member Rodrigo Sanchez (David DeSantos).

‘S.W.A.T.’ Season 5 Episode 3 will air on Friday, October 15, 2021, at 8 p.m. ET on CBS.
If you missed the show on cable, it’s still available on CBS’ official website and Paramount+. YouTube TV, Fubo TV, DirecTV, Xfinity, and Hulu+Live TV are all possibilities for cord-cutters. Vudu, Amazon Prime, Google Play, Microsoft Store, and iTunes may also have the episode on demand. Subscribers to Hulu can also watch the first three seasons here.

How to Watch SWAT Season 5 Episode 3 in the UK?

Amazon Prime is one option for UK fans, however, just the first three seasons are available on the platform. It’s unclear when the fourth and fifth installments will be available on the service, but there could be a long wait for the next episodes. For those who are unfamiliar with Amazon Prime, it costs £7.99 per month or £79 per year. Unfortunately, Sky hasn’t said when or if the new season will air.

Christina Alonso and Dominique Luca are called back to S.W.A.T. after learning that the 20 Squad is no longer operational. Luca, on the other hand, maintains that if Deacon is willing to reconstitute the team, he can replace Hondo. Hondo enlists Charro’s help in Mexico to reclaim Delfina from Arthur Novak. Hondo and Charro track down Gabriel, who reveals that AJ murdered Miguel because he had silver hidden on his property. Charro approaches his supervisor for professional aid, but he is turned down after being told to bring the evidence to Mexico City. Charro and Hondo load themselves with weapons and investigate the compound where Delfina is being held since they have no other choice. They see Gabriel dragging Delfina out of the room a few seconds later when AJ intervenes. He’s ready to attack her when Hondo fires a shot.

Arthur rushes in, only to find his son unresponsive. Despite the fact that he is now on the run from the enemy, Hondo informs them that Isabel is willing to hand over the deed in exchange for her daughter’s freedom. A sudden explosion occurs at the location, and Novak tries to take Delfina away. Before shooting Novak and rescuing Delfina, Hondo takes out the gunmen. The men are eventually apprehended. Finally, Deacon concedes that the 20 Squad would be incomplete without Hondo, who appears at the same time as everyone else.