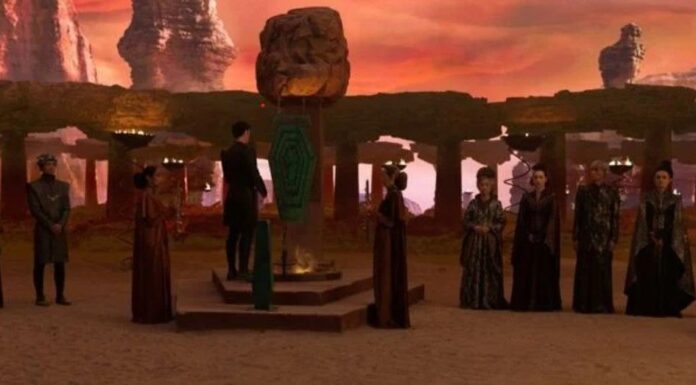 A routine trip to a Federation Colony turns into a perilous confrontation with a strong enemy in Star Trek: Strange New Worlds episode 4. Number One takes the landing group to the planet, where they discover frightening traces of a massacre. They come across the planet’s refugees and give them somewhere to stay on the Enterprise. The attackers, on the other hand, take advantage of this and assault both ships, causing significant damage.

Star Trek: Strange New Worlds is a spinoff from Star Trek: Discovery and is the 11th Star Trek series overall. The upcoming episode 5 of Star Trek: Strange New Worlds reveals that the show is revisiting a classic Star Trek: The Original Series episode. The episode is titled “Spock Amok,” a reference to “Amok Time,” a classic episode of Star Trek: The Original Series. New photographs suggesting what is to come for the crew of the USS Enterprise have been released by CBS/Paramount ahead of the release of episode 5.
The graphics hint that the plot of the upcoming episode may return to some of the themes from “Amok Time,” such as the love tension between Spock and T’Pring (Gia Sandhu). Take a look at the photographs below:

Star Trek: Strange New Worlds Episode 105 Synopsis: It’s a comedy of manners when Spock has a personal visit in the middle of Spock and Captain Pike’s crucial negotiations with an unusual alien species.

“Spock Amok,” the fifth episode of Star Trek: Strange New Worlds, will be released on Thursday, June 02, 2022, at 3:00 a.m. PDT on Paramount plus. In the United States, Latin America, Australia, and the Nordics, Star Trek: Strange New Worlds premieres on Thursdays exclusively on Paramount+. In Canada, the series airs on Bell Media’s CTV Sci-Fi Channel and is available to stream on Crave. It is broadcast on TVNZ in New Zealand and Voot Select in India. Strange New Worlds will be available on Paramount+ in several European countries when the service launches later this year, beginning in June in the United Kingdom and Ireland.

The crew sets out on a regular expedition to a Federation Colony, only to find it deserted. The communications systems appear to be hacked as well. Number One, perplexed by this occurrence, decides to lead a landing crew to explore the situation. Their research uncovers evidence of a massive massacre, as well as an unexplained spacecraft orbiting the planet. The craft’s passengers identify themselves as planet survivors and are welcomed aboard the Enterprise. Singh realizes the attackers are Gorn since she has a horrible history with them and barely survived an encounter with them. Unfortunately, it’s too late by the time she gets this knowledge together, and the Gorn executes a well-planned surprise attack on both ships. Number One and Hemmer both incur injuries as a result of the attack’s brutality. The refugees’ ship has been entirely sunk. The Gorn gained the upper hand in the battle because they took advantage of the Enterprise’s reduced shield protection as the refugees boarded and used it to inflict additional damage. Singh warns Pike that escaping or going on the offensive will put their lives in jeopardy.