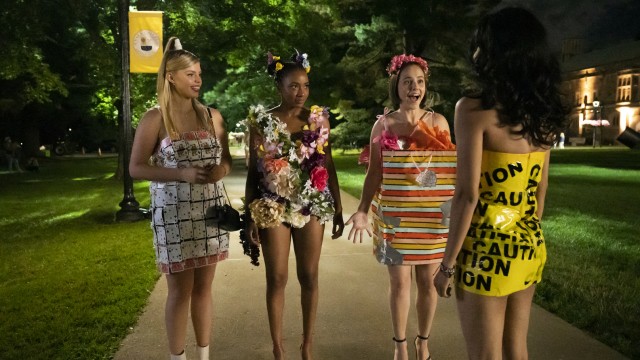 There have been plenty of TV comedies set in college – “Community,” “Grown-ish,” and “Dear White People,” to name a few – but what makes “Sex Lives” stand out is how completely realized these characters are from the time their parents leave them off at school. The series stars Pauline Chalamet, Amrit Kaur, Reneé Rapp, and Alyah Chanelle Scott. The streaming comedy follows four college housemates at a fictional New England University: Kimberly (Pauline Chalamet), a wide-eyed over-achiever coming out of a long-term engagement; and Leighton (Reneé Rapp), an affluent girl whose cold appearance hides a tender side. fans are eagerly anticipating new episodes. But when will we be able to see the final episode? You’ll discover everything you need to know right here (tvacute.com).

Due to weekly releases, “Sex Lives” finished its first season in less than a month. Despite glowing reviews from critics and Twitter users, the show has largely gone unnoticed. Now is the perfect moment to catch up on the most lovely new discovery of the TV season, proving once again that Kaling writes young women better than anybody else.

‘The Sex Lives of College Girls’ will air on HBO Max in mid-November 2021, at 3 a.m. ET. There are 10 episodes in the first season, with fresh episodes airing every Thursday. The show’s season finale will air immediately following the ninth episode.

Where can I watch The Sex Lives of College Girls Online?

The episodes are only available on HBO Max because the show is an HBO Max original. To watch the show here, you must first subscribe to the service. You can select between a basic monthly plan for $9.99 and an ad-free membership for $14.99 each month.

The Sex Lives of College Girls has been renewed for Season 2 by HBO Max. The 10-episode series ends out its first season on Thursday, Dec. 9, with the last two episodes.

“Mindy Kaling and Justin Noble have crafted a show full of heart, female friendships, and awkward naked parties,” said Sarah Aubrey, HBO Max’s original programming chief. This hilarious, honest account of college life has resonated for everyone, whether or not they had sex in college. What will these sophisticated yet accessible people do next?”

Sex Lives of College Girls Episode 2: Naked Party – November 16, 2021
The first week of class finds Kimberly feeling out of her league, while Leighton thrives academically… but not so much otherwise. Whitney confronts soccer drama, and — looking to get properly wild — Bela and Kimberly go to a naked party.

Sex Lives of College Girls Episode 3: Le Tuteur – November 25, 2021
While Kimberly connects with Nico during a tutoring session, Leighton begrudgingly starts volunteering at the women’s center, Bela explores the local dating app pool, and Whitney seeks to take things with Dalton to the next level.

Sex Lives of College Girls Episode 4: Kappa – November 25, 2021
After mingling with an exclusive sorority, Leighton gets roped into a date with a boy, while Whitney confides in a teammate about her relationship with Dalton. With Kimberly in tow, Bela speaks her mind at a high-profile Catullan event.

Sex Lives of College Girls Episode 5: That Comment Tho – November 25, 2021
While a cryptic message from Nico sends Kimberly reeling, Leighton invites the women’s center to her brother’s frat party. Bela has an uncomfortable experience with a Catullan editor, and Whitney navigates the fallout of investigative work.

Sex Lives of College Girls Episode 6: Parents Weekend – December 2, 2021
After reuniting with their families for the first time since move-in day, the girls struggle through an uncomfortable dinner, where parents clash, egos are bruised, and secrets are revealed.

Sex Lives of College Girls Episode 7: I Think I’m a Sex Addict – December 2, 2021
While Bela anxiously awaits the Catullan’s final decision, Kimberly gets hooked on casual sex with Nico, Whitney explores her connection with Canaan, and Leighton takes the next step with Alicia.

Sex Lives of College Girls Episode 9: Cheating – December 9, 2021
A heartbroken Kimberly considers cheating on an exam. Leighton’s fear of coming out upends her weekend getaway with Alicia. Bela navigates the fallout of exposing assault. Whitney confronts the truth about Dalton.

Sex Lives of College Girls Episode 10: The Truth – December 9, 2021
While Kimberly faces possible expulsion after her honor code violation, Bela takes a stand against the Catullan’s culture, Whitney levels with her mom, and Leighton speaks her truth.