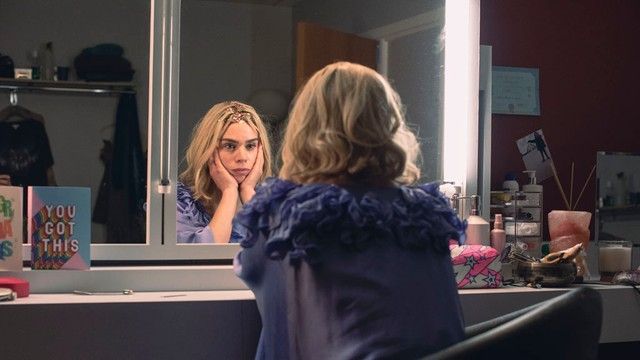 The darkly comedic drama television show I Hate Suzie was created by Lucy Prebble and Billie Piper in the United Kingdom. A second season, titled “I Hate Suzie Too,” was ordered on 19 February 2021 and debuted on Sky Atlantic on 20 December 2022.   In I Hate Suzie Season 2, Suzie has a new agent, PR, and job, dancing for likes on “Dance Crazee,” a reality show that has viewers captivated. Suzie returns to her first love, the public, after losing everything. In this three-part anti-Christmas special, Suzie struggles to win back the British public while her personal life unravels. Will she win their hearts/votes and redeem herself? What price? (tvacute.com) Here is all you need to know about the conclusion of the I Hate Suzie Season 2 Episode 3 Recap, in case you missed any of the exciting moments.

When the third and final episode of I Hate Suzie begins, it is the finale night of Dance Crazee, and Suzie is getting restless in her changing room with her partner Danny. The episode follows Suzie as she competes on the show. There is complete chaos backstage as the show’s producers explain to her that her routine will need to be altered because a royal guest will be attending the performance. In addition to everything else, Suzie is currently waiting for the results of the drug test that she took. You guessed correctly; this is a surefire way to get into serious trouble.

During the most recent “crisis chat,” her representatives inquire as to whether or not she has been having sexual relations with Danny. She tells lies and claims that it’s not true, but the expression on her face gradually changes into one of terror. It is highly likely that the possibility of another scandal is more than she can handle at this time. Suzie notices Naomi giving a bear hug to Cob with only ten minutes left until the live show begins. Suzie is in tears as she makes her way to the set after having yet another upsetting interaction with her family; boy, the tension is building! She takes Una aside and inquires as to who might be aware of her relationship with Danny. The young woman laments that “everyone knows,” which makes it nearly impossible to locate the source of the leak.

Suzie brings up the idea of providing the media with a fresh narrative while she is once again meeting with her representatives. She desires for it to become public knowledge that Cob intends to spend Christmas apart from Frank and her as a form of retribution for her participation in the show. She thinks it might be able to take the place of the Danny story, and everything she’s saying about it is accurate. However, Holland and Sian are not convinced by this argument. The next thing that happens is that Suzie suggests exposing Danny as a bisexual, which demonstrates that the woman is, in fact, completely off her rocker. We are fortunate that she is represented by some very sensible and very professional people. We can see that she is beginning to disassociate from herself as the stylist finishes putting the finishing touches on her hair and makeup. Her dance begins, and she decides that a cover of Hole’s “Miss World” is the perfect song to perform to while she is on stage.

Her solo, which comes as a complete and pleasant surprise, also goes off without a hitch. However, she is irritated because her family never arrived at the theater in time to take their seats. She is informed that Frank and Cob are in her dressing room, and a look of terror immediately takes over her features. The results of her drug test were inconclusive, so the attorneys call her before she can enter the building. However, after hearing from the attorneys that it won’t hold up in court, her initial excitement is quickly dashed.

She lets Cob know that he can have Frank for Christmas, and he accuses her of enjoying the disorder that will ensue. He supposes that the results of her drug tests were positive. They have a disagreement. Suzie has acknowledged that Naomi is the one who has been texting him. The following statement from Cob reveals how much time the two of them have been spending together by stating that even Naomi thinks she’s crazy. During their argument, Suzie asks Naomi if she’s ever had sexual relations with Cob. What a disaster for attempts at reconciliation. Suz does some last-minute make-up and hair styling returns to the stage for the final group dance and delivers a performance that is absolutely on fire. It’s sexy, it’s edgy, and it’s as fierce as the devil himself. When the results are revealed, everyone is shocked to see that Suzie came out on top. She is flabbergasted and overcome with emotion. The host then hands the microphone to her and asks her how she is doing. When this happens, being authentic becomes problematic.

She expresses her gratitude to those watching at home and calls this the happiest moment of her life. Then she says that everything she has done is for Frank, and she assures the young man that no matter what he may read about her, she will always love him. She expresses her regret that she will be unable to spend Christmas with him. At this point, she is sobbing and completely losing control of her emotions. The breakdown evolves into a meltdown at this point. She exposes her bald head by ripping off a wig on her head. She is still retaining control of the microphone. She assures Cob that he will not take anything else that belongs to her that he has. She strikes herself repeatedly in the head, just as her agent swoops in to put an end to the entire situation. She looks for Naomi, who is nowhere to be found, and continues her search.

Suzie begins to have a hallucination that she is dressed to the nines and dancing with her mother as soon as she hears pop music playing over the speakers. The attention that she receives from the audience is overwhelming. She is cherished by all. She is a beacon of love and illumination. She tells Frank that she can’t imagine her life without him. She takes pleasure in her fame. She is a SHINING STAR. But then we were brought back to the present. While she is being engulfed in mayhem, Bailey is attempting to distract her and get her off the stage. She is taking some time for herself on the stage, which is currently vacant, by sitting on the floor by herself. She is acting irrationally and will not get up, so security has to physically remove her from the premises.