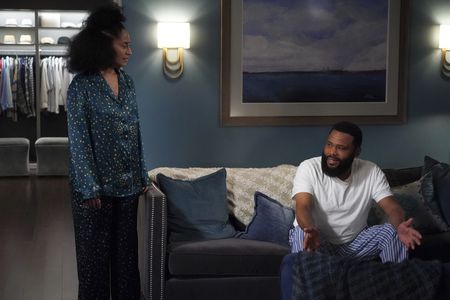 Johnson, a black upper-middle-class family, has strived to maintain cultural identity. The show has exposed socially serious issues ranging from the movement of the Black Matter life to the global epidemic and the electorate.  So, Are you ready for the finale of ABC’s groundbreaking sitcom Black-ish Season 7? An episode titled “Urban Legend” will air this Tuesday. Seeing that you are tickling, Dre (Anderson) is going to consider a career move from the urban marketing team at his advertising agency, Stevens & Lido. To know more about promos, photos, and synopsis of Season Finale: Black-ish Season 7 Episode 21

Black-ish Season 7 Finale “Urban Legend”  Synopsis– Dre feels pigeonholed to the urban marketing team at Stevens & Lido and realizes he needs to make some big career changes. Boyz II Men stop by the office to help out the team with a campaign. Meanwhile, Junior has to deal with the twins who are overstaying their welcome at his and Olivia’s apartment.

The season finale of Black-ish Episode 7.21 will air on TUESDAY, MAY 18 from 9:00-9:30 p.m. EDT on ABC. the guest stars in the finale season are Nathan Morris, Wanya Morris, and Shawn Stockman of Boyz II Men as themselves. “Urban Legend” was written by Graham Towers & Ben Deeb and directed by Melissa Kosar.

Black-ish renewed for final season eight. The first announcement was made by Kenya-Barris, the creator of Black-ish. That show has been renewed for its eighth and final season, posting a video with actors such as Anthony Anderson, Tracy Ellis Ross, and Lawrence Fishburne.