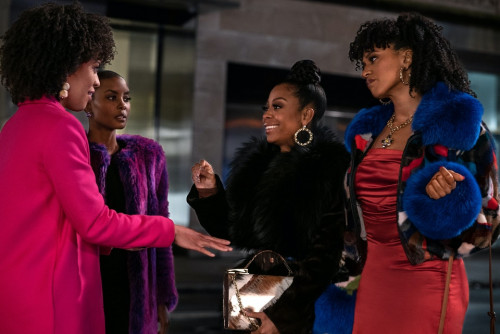 As key truths are revealed last week in episode 7 Run the World, Sondi (Corbin Reid) takes Amari to a performance by dancers. The celebrity catches his wife—and Ella’s friend—in the bathroom. Renee (Bresha Webb) resigns. Whitney and her fiancé Ola are busy with their wedding preparations. The episode ends with Whitney (Amber Stevens) hearing a knock at the door. To know this you have to watch the next episode, this is going to be special as it will be the last episode of this season 1. The stage is set for the new episode 8 titled “Almost, Lady, Almost!” you can see its promo, photos, and synopsis with  www.tvacute.com, to get to know more about the season finale episode 8 more closely.

Run The World Episode 108 Synopsis: Ella, Renee, Sondi and Hope get wild and crazy at Whitney’s bachelorette party, but the bride is nowhere to be found.

Run The World season1 finale episode 8 will release on Sunday, July 11, 2021, at 8:30 PM on  STARZ. Apart from this, if you want to watch Run The World episodes online and live, then you can watch Hulu and Youtube Tv. You can rent or buy episodes on VOD platforms such as Prime Video and Apple tv.

Sondi takes Amari to watch a performance of black ballet dancers. Amari is happy because there are dancers who look like she and Sondi asks her to wear ballet shoes. She finds a new mentor. Matthew (Stephen Bishop) suggests considering asking Sondy the Baptist. Meanwhile, Ella ((Andrea Bordeaux) attends a special dinner with a celebrity. He catches his wife – and Ella’s friend – cheating on the celebrity in the bathroom. Renee meets her college friend Mia, who is now the VP at L’Oréal Cosmetics. Renee resigns and she was not supposed to live and thus was constantly insulted.

While out with Renee, Ella meets Iman, who is furious about the story and vows to drag her name in the mud. Whitney and her fiancé Ola (Tosin Morohunfola) have another session with their marriage counselor, Whitney on her own. As the bachelor prepares for the party, she hears a knock at the door.